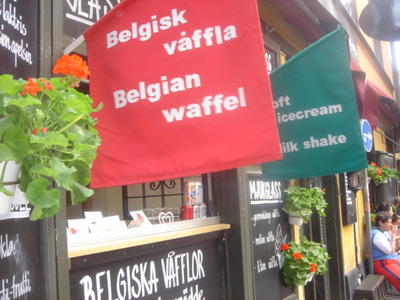 Mr. Waffle took this photo to prove that he was thinking of me and also a toy theatre.  Attentive readers will remember that back in February, I expressed nostalgia in relation to toy theatres. I then promptly forgot all about them until Mr. Waffle came back from Sweden bearing one aloft in triumph. I was thrilled.  When I get him presents, I get him socks. Truly it is a burden as well as a delight to live with a great present giver. The Princess got a furry turtle which we named Sven, because we are cruel and get a kick out of hearing her try to say it with her lisp.

Hard to believe as it is, I think this blog could be even more exciting if called Belgiska Vafflor.Sounds like a evil genius comic book villain…

You’re famous. I knew it.

Pog, Locotes, a name change is tempting, isn’t it?

I know, I’d feel all viking; but I think I’m probably too wet to live up to it.

Nah – I can just see you with the horned helmet and yellow braids …. and a bit of looting and pillaging never hurt anyone. Well, not anyone doing it.

Comment Modified) Race traitor! Was it for this your ancestors build the round towers and buried the Ardagh Chalice in a bog or for this that Brian of the Dal Cais – with the Irish of Munster, the U’Neil and brave-hearted Ostmen kicked the crap out of that black’art Mael Morda and his Norse ally King Sygtrygg at Clontarf?! Have you no memory for such things, woman!
🙂

That would be the Cork crowd. And the Dove Ling shower…

Now, now and you with a trip to Douglas imminent.