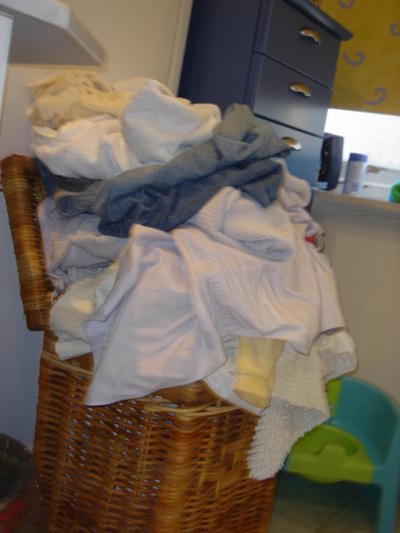 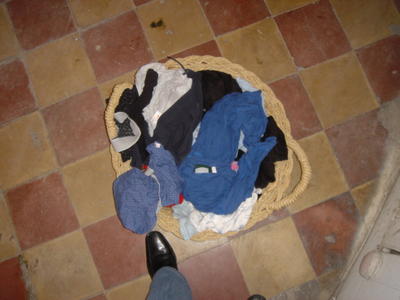 And, as our American cousins would say, payback:

0
Sweetie(s) given ���
Minkleberry
on 28 February 2006 at 21:42
Our house looks like a massive washing basket. Your children should be on a washing powder advert. They are beautiful xx

I was talking to my friend the tax lawyer recently. How many houses have you got now? I asked. Only two she said defensively. Really? Well, surely the one I live in doesn’t count?

This week is mid-term. Who knows whether I will be able to blog any more or not? Just me and the three small children at home. To save my sanity there will be a treat at the end of the week. Mr. Waffle is taking a half day on Friday and we are driving to the Hague where the lovely Dutch Mama and her family will be welcoming us for the weekend.

Last time we went there, the Princess vomited on everything all the time and they’re still having us back. How kind and brave. Frankly, it’s as well that this treat is in store because on the following Monday night, Mr. Waffle is off in the neighbouring Grand Duchy for work and my children and I will be spending our first night alone together in a while.

By the by, for those of you following the sleeping drama, it took the boys an hour to cry themselves to sleep last night but I’m past caring. Myself and Mr. Waffle sat on the sofa and callously turned up the volume on Jamie’s school dinners subtitled in French, while our poor baby boys howled piteously for their parents. They had the last laugh, however, and got us up from midnight to one, three to four, and four thirty to seven fifteen.

The Princess rose at 7.30 and told us solemnly that she was “not very sick, but a little bit sick”. This would appear to be an accurate diagnosis, so no leaving the house for me then. [Manic cackle echoes round the blog].

Last night we put the boys to bed at 7.00 and the pair of us alternately and together rocked them and soothed them until 10.20 when we gave up the ghost. Neither of them had slept for more than a few minutes and all four of us were exhausted. We decided to let them cry it out. Michael cried for 20 minutes and then stopped. Daniel cried lustily for a full 45 minutes. At 11.05 all was silent. It is very miserable to listen to your children cry and not to do anything about it. And then, I was cruelly awoken at 11.23 by the sound of howling. I suppose that we will look back at this some day and laugh. Hollowly.
Comments

Have you considered an exorcism? Perhaps this kind can only be driven out by prayer.

They say I cried a lot as a child. I only found out years later that I was plied with whiskey and milk on such occasions. All a bit Pavlovian, I?d say… 🙂
belgianwaffleon 27 February 2006 at 13:05
Mike, that is such a lovely idea. I would pretty much pay anything for borrowed sleep.
Kristin, am touched and spelling variation too.
FT, I like that.
JD, is that illegal now? I suppose no one would have to know..

I’d go for whiskey and an exorcism – you may even want to try witchcraft too.

DMTS, perhaps the nightmare is ending. No howling so far tonight.

The no sleep regime continues unabated. Daniel is like a briar. I suppose Michael has never really slept at night, so he’s used to it, but Daniel is finding the regular waking every bit as trying as his parents.

Today, I decided to go out and buy various things. Just to get out in the car where, I hoped, my cranky Daniel would sleep. I have just moved them to a double buggy which is wonderful etc. but despite being, you would think, an old hand at buggy folding and unfolding, I have found it just a tad challenging. This morning, I had the two boys sitting in their car seats in the hall and I tried to fold the buggy to get it into the car. No joy. Then discovered that the sling had become enmeshed with it and began trying to wrestle it out. Michael gurgled mirthfully at the sight of his mother becoming flushed and unhappy. Daniel began to howl. That boy can howl. I dislodged the sling and discovered that because the seats were still reclining when I tried to fold the wretched thing, that it was stuck half open, half closed. I wrestled some more. Daniel howled some more. The people who work in an office on the ground floor tried to ignore us. I gave a muffled howl of frustration. Daniel didn’t bother muffling his howls. I stamped my foot. Still, the wretched thing wouldn’t yield. I put screaming Daniel in the garage where he screamed some more; Michael was enjoying the show so much that I let him stay put. I eventually managed to reopen the buggy but I fear that its canopy is fatally injured.

Did young Daniel fall asleep in the car? No he did not. As I type he sits gurgling in my lap looking as though butter wouldnt melt in his mouth.

Comments
Lilo
on 24 February 2006 at 19:58 Having read this and your other sleep post I must say how impressed I am about how sane you’re sounding. We introduced the baby girl into the little boy’s room earlier this week, despite complaining of headaches when she cries and a bed-wetting incident which resulted in the little boy coming in to sleep with us, things seem to be going fairly smoothly. I’m only getting up 3 times a night now instead of every 2 hours – sorry this must sound like a luxury to you, but I’m sure things will smooth themselves out soon

kristin
on 25 February 2006 at 21:18
why is it that the stroller only malfunctions during moments of stress, like trying to board a plane or pack the munchkins into the car? the stroller gods are evil, methinks.
belgianwaffle
on 27 February 2006 at 13:02
FT, um, probably…
Lilo, I dunno, I am slightly despairing.
Kristin, the stroller gods are evil and cruel.
Minkleberry
on 27 February 2006 at 16:11
I hate it when people offer useless advice when you’re quite literally at the end of your tether- however, the end of my tether was what prompted me to read http://www.babywhisperer.com/ No crying out necessary xxx
belgianwaffle
on 02 March 2006 at 22:01
Minks, thanks for the sweeties and the advice…in fact, I don’t want to tempt fate here, but tonight they went straight to sleep at 7.30 and here I am (most foolishly) still up at 11.00 and not a peep out of them.

We attended L’s third birthday party yesterday. The invitees were encouraged to come in their carnival outfits. There were eight little girls in attendance. We had seven fairy princesses and one pirate. I regret to inform you that I was not the mother of the pirate.

Sorry, I meant why, thank you. Not why thank you?