Last week, I was having a cup of tea with a colleague and she mentioned that she was going to see Ben Folds perform at the American ambassador’s residence. Who was he? Did I have any idea?* “Oh yes,” I gushed, “I love Ben Folds!” I was slightly overstating my enthusiasm, I mean I had bought an album and I’d been to a concert but that was before my children were born. And then, I’m not really a music person (insert gasp of outrage here).

Anyhow, my colleague was adamant that I should go and went to the trouble of asking her contact in the embassy to send me a ticket. It seemed churlish to point out that the night of the concert, last Friday, really didn’t suit me. Mr. Waffle was away and I was busy at work. I arranged for a babysitter to come to the house at 5.45, intending to peel off early from work and be at home at 5.30 to see off childminder and ready at 5.45 to welcome babysitter.

Regrettably at 5.45, I was sitting in a meeting, squirming in my seat. Meanwhile the babysitter had arrived at home and finding the house in darkness (childminder and children late home from school, not part of my calculations), texted Mr. Waffle (at that point in Heathrow) and me. Mr. Waffle texted me and generally, I was feeling a bit under pressure. My boss of bosses, who is a kindly soul with young children asked whether I needed to leave. Gratefully, I said that I did and he said we could talk on Saturday which, frankly, didn’t fill either of us with joy, but was very welcome at that moment.

As I was going down to the garage, the babysitter called. She and the childminder were exchanging posts. I spoke to the childminder, “Would he pick up the timetable for his hours for mid-term on the hall table?” He would. I got home, kissed the children, ordered Domino’s pizza and ran out the door again.

So, frankly, Mr. Folds would really have to deliver the goods to make it all worthwhile. And it was so worthwhile. The Ambassador’s residence is lovely. The President and his wife turned up from their house across the road, adding to the sense of occasion. There were only about 100 of us there. It was recorded live for the radio (listen here, if you fancy) and the session was delightful. Not just the live part but the impromptu tunes in the commercial breaks and the numbers that Ben Folds did afterwards for the audience. I was enchanted. I don’t know when I have enjoyed a musical occasion more. I had to leave immediately after the performance as I was collecting Mr. Waffle from the airport so, just pausing to cram some of the ambassador’s delicious canapés in my mouth (insert your own Ferrero Rocher joke here), I ran out the door. I gave up an opportunity to chat to the great man, but Mr. Waffle was suitably grateful. And I got a signed poster which I am half thinking of framing and putting up on the wall like a teenager. 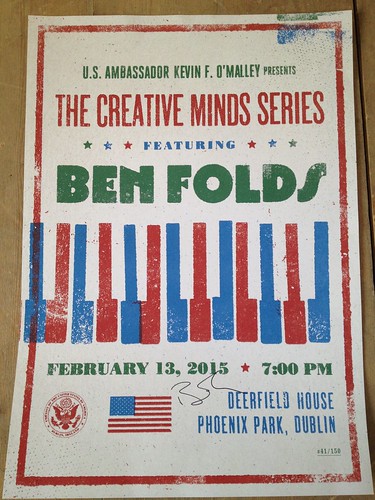 *Obviously Ben Folds, not the American ambassador. Don’t be pedantic. Although that is what I love about you.