I asked the Princess to make me mint biscuits and she kindly consented. “We need peppermint essence,” she said. It was not available in our local shops. “We could make it,” I said. We looked it up on the internet. All we needed was mint (of which we had a superabundance) and vodka (of which we had none). 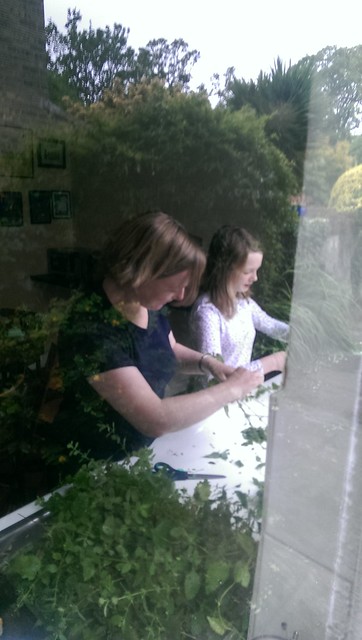 We rang Mr. Waffle who was at the library with the boys and asked him to get some vodka for us. He came back with a €20 bottle. In a moment of rashness, we used it all. We now have a litre of peppermint essence in preparation. 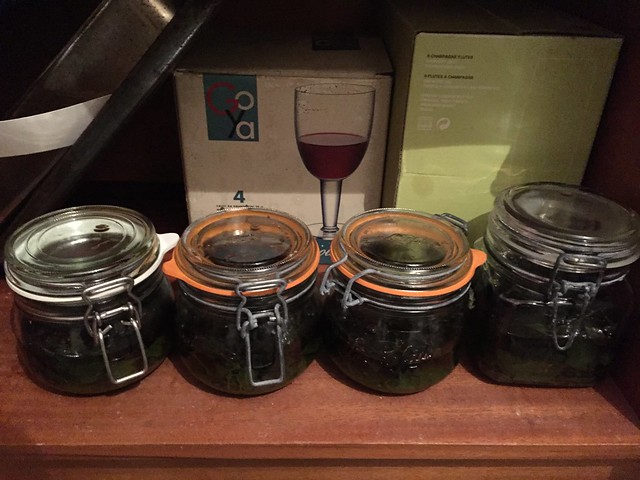 All I can say is, I’m looking forward to these biscuits. It you know me and you need peppermint essence, contact me, I can do you a great deal.

I’ve been blogging for a long time. However, the only people I have ever met through blogging have been a couple of people who blogged on the platform I started on. It was called 20six and it has long since disappeared off the internet forever [actually, is that even possible?] but it was my first blogging community and it still has a place in my heart.

So, it was lovely when Heather, one of those 20sixers, contacted me to say that she and her husband would be in Ireland and could we meet again. I followed her blog for years. Sadly she has stopped blogging which is such a pity as she was a talented writer; moving, interesting and hilarious by turns. I say this here because when I met her, it was so exciting to talk about her life and what other bloggers were doing that I forgot entirely to say please go back to writing. Twitter is all very well in its way but it’s just not the same. I’ll say it when I see her next; she and her husband enjoyed the best weather of the summer in Ireland so I feel that we might be able to persuade them to come back. 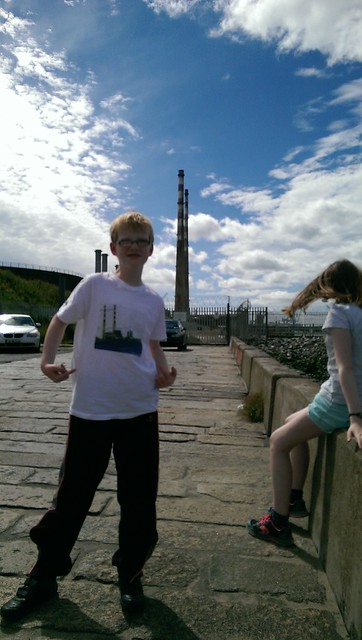 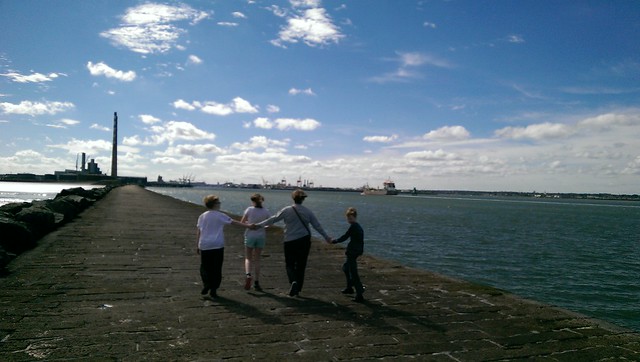 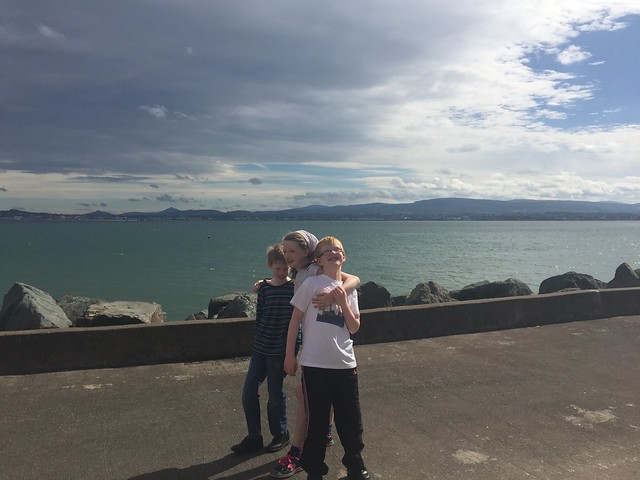 All of the regular readers at mass have been taken out by the summer holidays and we have total control of the second reading and the prayers of the faithful. We became so confident that we even had the cousins (who were staying) do some of the prayers of the faithful with our lot. Our hegemony is coming to an end as we go off on our own summer holidays and I was talking to the sacristan about logistics and handing over the baton. As we were chatting, I asked her whether she would be going away herself. “I’ll probably get a couple of days surfing alright,” said she. The surfing sacristan; we are amazingly with it in our parish.

I took a week off work in July and brought the children to Cork. This was largely successful although Herself came down with a cold which dogged her for the next fortnight. Happily she does not seem to have passed it on to any of her elderly relatives.

We did the usual things. We went to Charles Fort. It lashed rain on us. The walk out was very damp. 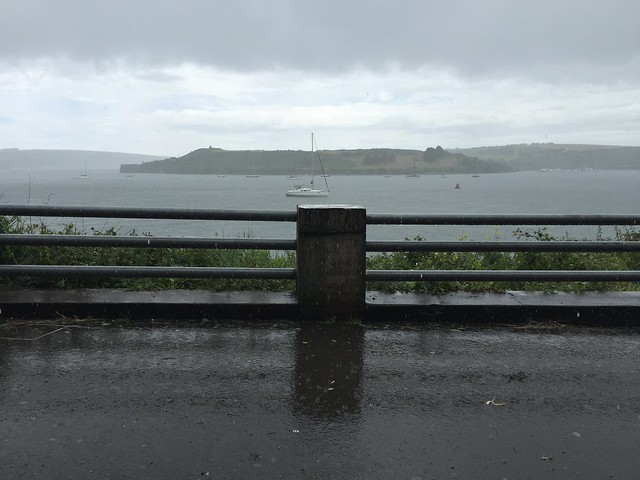 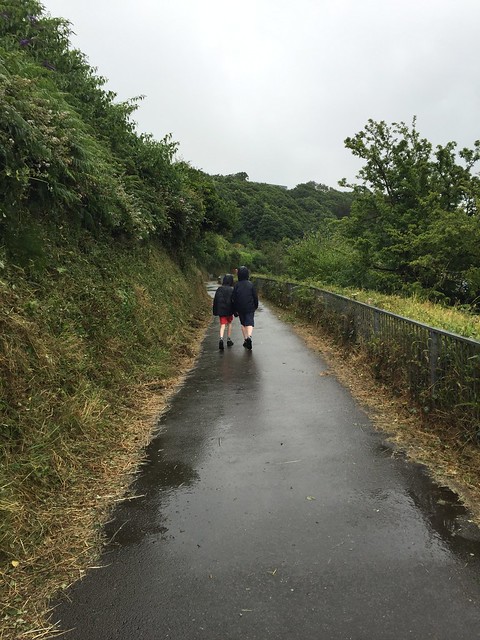 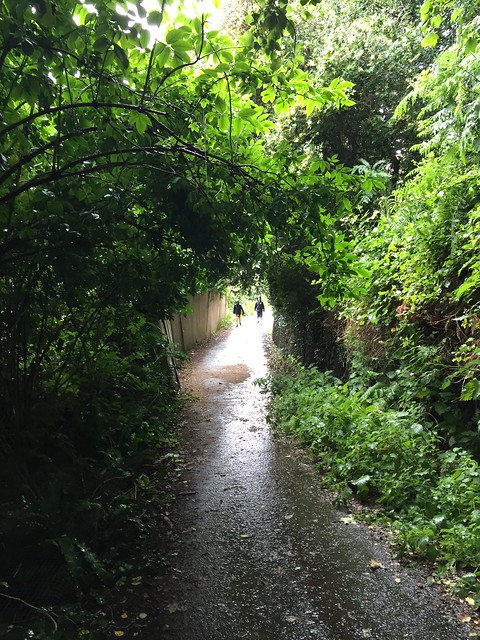 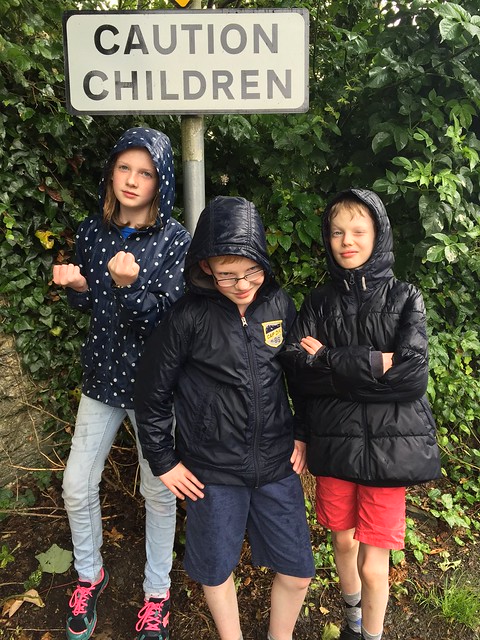 But happily, on arrival at the fort, the sun came out. 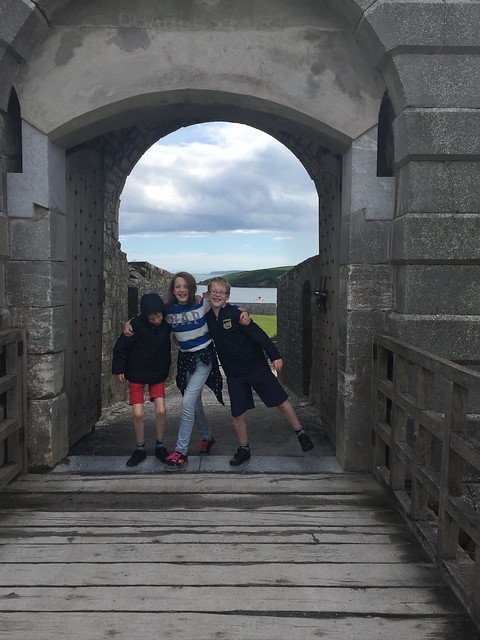 We had lunch in the Bulman.

We dropped round to see an old friend of mine and her family. She emigrated to America years ago. She and her husband bought a house in Kinsale and now visit regularly with their four American children. We don’t meet very often due to geography but it is delightful to see the children of friends growing up in leaps and bounds. We had dinner with them; found out about each others lives; reintroduced the children to each other and admired the beautiful view from their house. 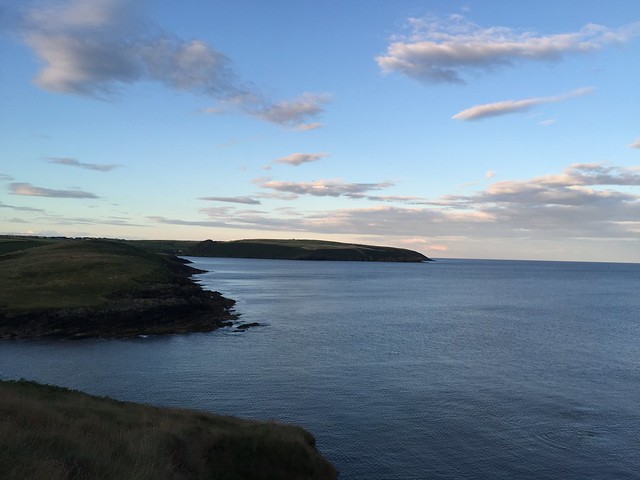 We went to Shandon. 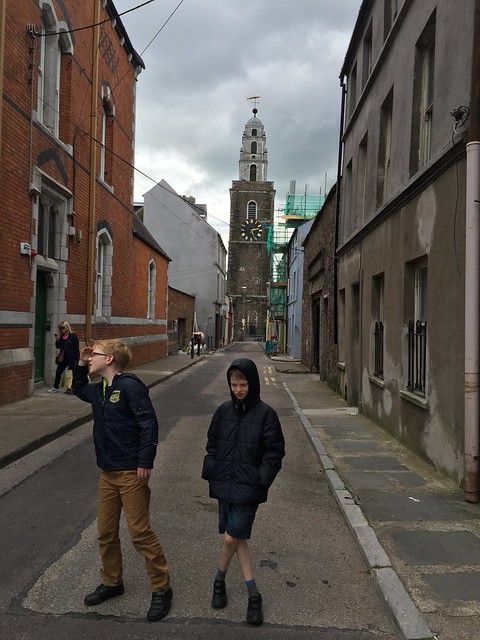 And rang the bells. 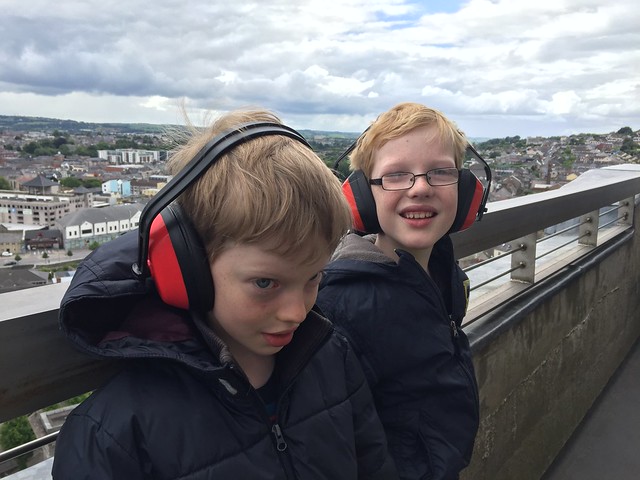 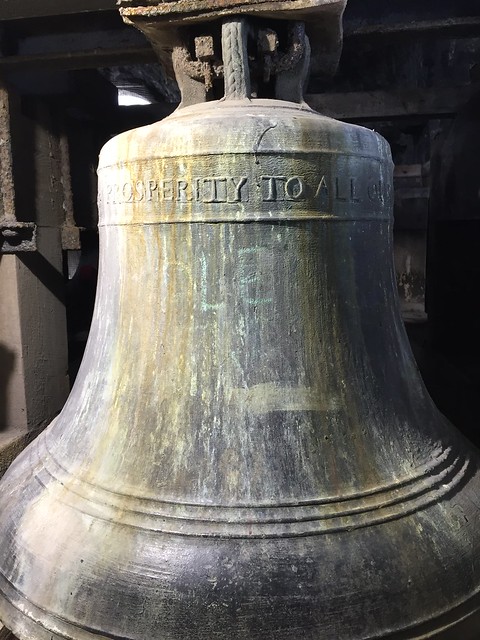 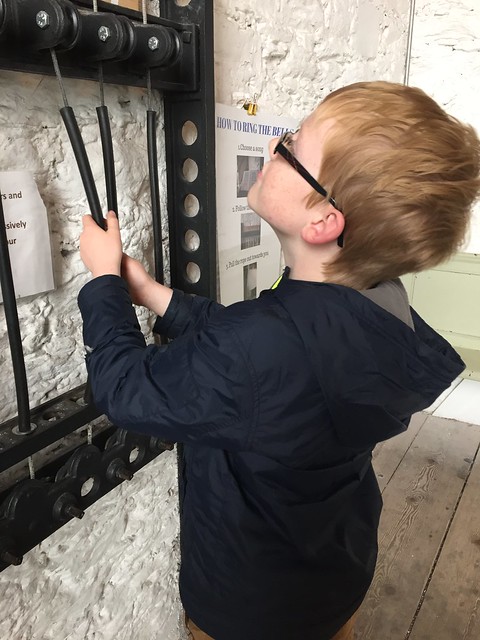 And visited the church (under some mild protest). 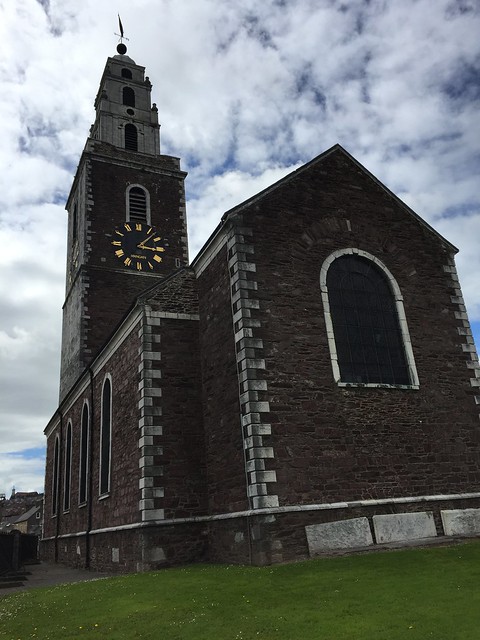 My sister and brother were very kind to them and doled out treats which they very much enjoyed. This, in part made up for the pain of having to visit the Crawford Gallery.

Herself was rather taken with this figure in Daniel Maclise’s “Francois 1 and Diane de Poitiers”. She feels it would make an excellent internet meme. Who am I to quibble with a digital native? 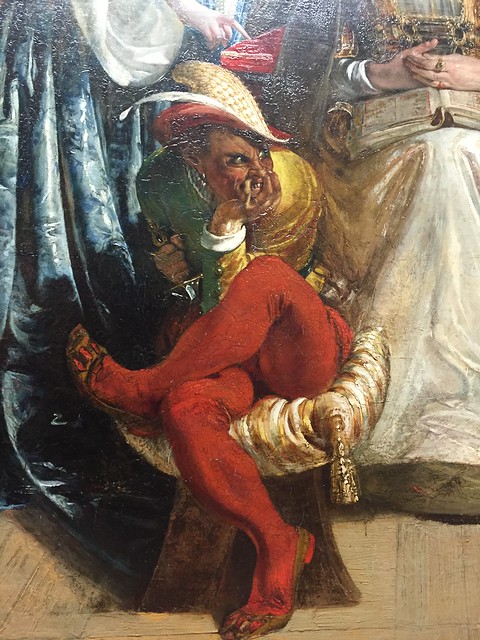 Probably a highlight for Herself was another raid on my parents’ attic. They are, of course, only too delighted to let her take stuff from there. As she had done an impressively massive root and branch clean out and re-organisation of her bedroom in Dublin, I could only concede that she now had room to accommodate a number of miscellaneous items which had taken her fancy. I rescued some things myself including a number of china jugs which had been wrapped in newspaper and, for reasons which are now lost in the mists of time, stored securely in an old wicker wastepaper basket.

On our return to Dublin, I ticked off the remaining item from our standard summer schedule and brought them to St Michan’s to see the crusader. You are no longer allowed to shake the mummified hand which, I suppose, is really for the best all things considered. The literature makes it seem like this was a 19th century thing but I know for a fact that it was standard practice in recent years, including last year. I said to the boys, “How exciting, you will be able to tell your grandchildren that you shook the mummy’s hand when you were 9 and when you came back the following year, you realised that that was the last opportunity ever!” They were not excited. 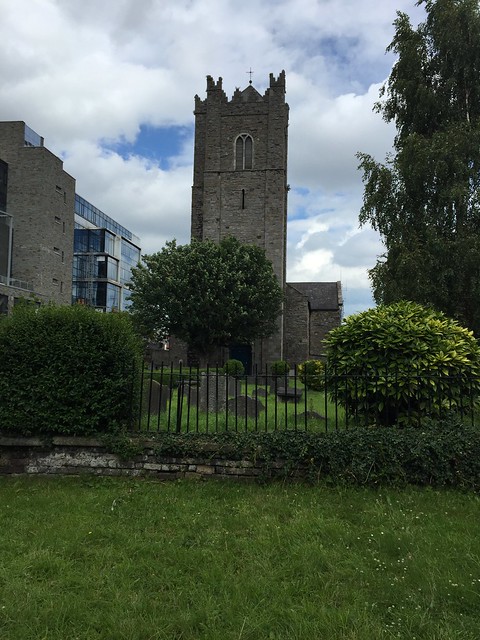 Finally, I might mention that I was rather taken with this junction box in Cork; alas, not an aspiration likely to be realised. 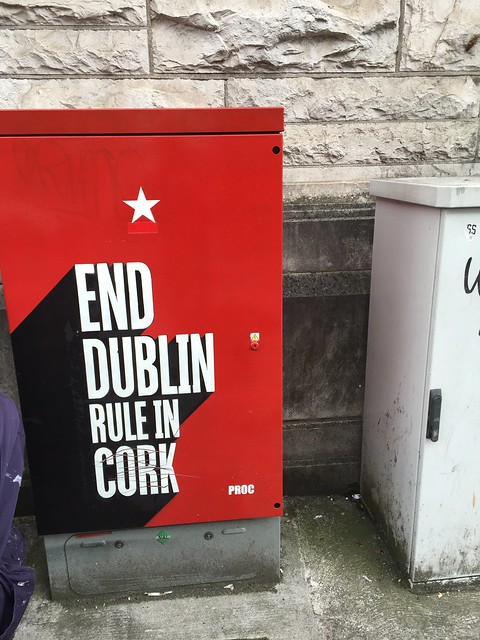 Herself likes to argue and debate. So does my brother. She is a feminist. Despite the best efforts of three generations (his mother, his aunt, his sisters, his niece) my brother remains resistant to the idea that discrimination against women exists in any form in Ireland. He and I have been arguing about this for around 30 years and I have largely given up. Herself is made of sterner stuff. Also she and my brother really seem to enjoy the vigourous cut and thrust of debate whereas I just get cross.

In my new back seat role, I enjoyed this dispatch from the front line.

From: Herself
To: Me
Subject: If The Media Wrote About Theresa May’s Husband The Way They Write About Samantha Cameron

Am having an argument with Uncle Dan about whether institutionalised sexism exists.