We persist in watching “Charité” a German TV series with German subtitles (for added effort). It’s set in the 1880s and its about a hospital in Berlin. It’s hard going and despite my friend who speaks excellent German reassuring me that there is lots of useful domestic vocabulary we are all struggling to see how herself will work the word “Kaiserschnitt” into her German oral.

The evenings feel delightfully long now that the clocks have gone back.

Monday evening is forage night (everyone makes his/her own dinner from the fridge contents – don’t judge) and Daniel usually makes himself pizza. He’s got very handy at making the dough. He said to me as he kneaded, “I couldn’t find the yeast so I’m going to try without.” At one level my children astonish me with their competence, at another level, not so much. We found the yeast.

There is a new announcement about the very slow lifting of Covid restrictions. Nothing is changing before April 12 when we may be able to go as far as 10kms from home. 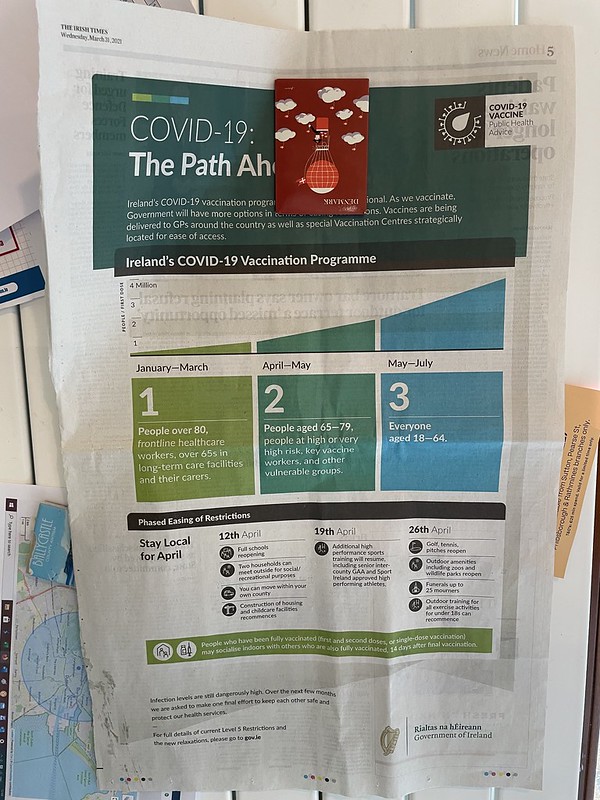 A very expensive Easter hamper from a nice hotel was advertised to me on instagram and, reader, I bought it.

The bathroom door broke. I’m not sure whether that constitutes an emergency in Covid times but we had a man in to fix it all the same. Apparently it took ages according to Mr. Waffle and the kids who were all confined to their work spaces for the duration of his visit while I was off in the office. He put it back opening the other way (at our request) and I am delighted with the increased feeling of spaciousness. To be clear, the bathroom remains tiny.

My camellia has finally produced several flowers. I am unreasonably delighted.

We got a notification that there was a Covid case in the school. What would once have been shocking is now a matter of general indifference. Though not a great sign with only two of the six years back in school.

The neighbourhood whatsapp group started to spiral out of control following some vandalism incidents. To my lasting admiration, one of the neighbours called out the language being used. Everyone is back to asking whether anyone knows a good plumber; how to keep the road clean and virtual Easter egg hunts. A relief.

The first day of my Easter holidays and April’s fool day. I failed to fool herself or Daniel but I did persuade Mr. Waffle that the new bathroom door had come off its hinges. As I pointed out to herself, the relief made it net hugely enjoyable for him. She was unsure. So was he.

Herself spent the morning crafting an application for a summer internship (she is not optimistic but you never know) and imagining a world where the Leaving Cert was over. Then she and I had a very satisfactory urban plunge. We went to Fallon and Byrne (food); Marks and Spencer (more food); Sheridan’s (cheese) and Clement and Pekoe (tea) which were pretty much the only places open. In the course of lock down I have been regularly reminded of this line from Alistair Horne’s book “The Siege of Paris”:

“When in October a copy of the Journal De Rouen was somehow smuggled into the city, and reprinted in extenso, Child remarked that ‘whoever had said 3 months ago that a Provincial paper a fortnight old arriving in Paris would cause a sensation would have been laughed at; however such was the case’.”

Thursday is property supplement day in the Irish Times and even by the generally florid style of this supplement the following line stood out:

“Central to the room is an on-trend cottagecore scrubbed pine table.”

It has been an objective with me since lock down 1 to cycle the length of the canals which, more or less, encircle the city. It was a beautiful day and Mr. Waffle and I set forth to see what could be done. We largely achieved my objective although we did have a brief diversion when we ended up following the Dodder rather than the canal. While commenting on the strangeness of seaweed in the canal; a curve; and a silted up island in the middle we remained convinced that we were on the right track until we saw a sign saying River Dodder in Ballsbridge.

We stopped off on Wilton Terrace in a small but pleasant park filled with deck chairs and a coffee van. It was a private park and though, in theory, I feel quite uncomfortable with that, in practice it was pretty pleasant. I was ravenous and went off to the van to purchase tea and a snack but Mr. Waffle tactfully reminded me that it was Good Friday and I’d already had my two collations, so I restrained myself and had a cup of black tea only. Not entirely satisfactory.

Slightly related: herself tells me that plastic surgeons call the two lines between my eyebrows the “angry 11s”. Happily they are not visible in this picture of me relaxing in the private sector deck chair – taken by my husband. On the minus side, all of my chins are visible.

I was pretty pleased with myself when we got home, though exhausted from our epic trek.

My 91 year old aunt in Cork got her second Covid jab, so that is a relief.

The very expensive hamper I ordered did not appear. I was pretty nervous as it contained our Easter Sunday lunch but I got a series of soothing emails and messages and it eventually arrived. It was pretty swish, people.

Mr. Waffle spent much of the day trying to make hot cross buns. He had huge success last year but this year, they just would not rise for him. As he said bitterly at the end of his efforts, “I’ve merged two traditions by creating the Passover unleavened bun.”

A friend of Mr. Waffle’s rang to ask whether herself would be willing to do some translation work for him – from French to English. She was delighted and has already mentally spent the generous fee several times.

It was time to yet again the deploy the house cleaning rota. God, we all hate it. But it’s effective.

We did not have takeaway night on Friday as it was Good Friday and it just seemed a bit odd, so we had it on Saturday. The children had pizza and the grown-ups a meal kit from Oliver Dunne. I was pretty impressed. It had, hands down, the best and most straightforward instructions of any meal kit we’ve got. The food was good and it was delivered to the door in a box not a lot larger than a pizza box. In fairness, they have the thing down to a fine art.

Herself was up at the crack of dawn organising an Easter egg hunt for the boys. They love her Easter egg hunts. The clues are always just right – enjoyably hard. For example, one of this year’s clues had a Caesar cipher which I had never heard of before but which they seemed to know well. 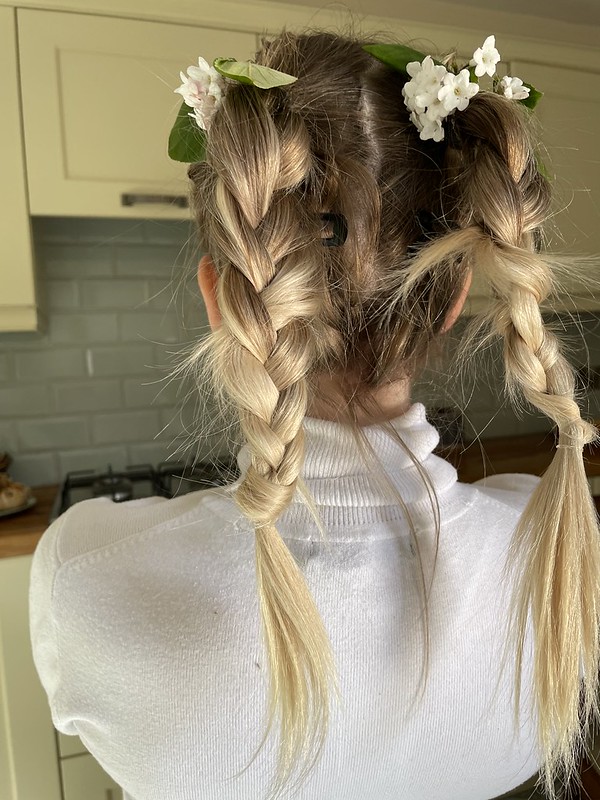 She and I then spent a happy couple of hours setting up the table and cooking our hamper contents. A gendered space I fear. She had a vision of renaissance extravagance for the table: 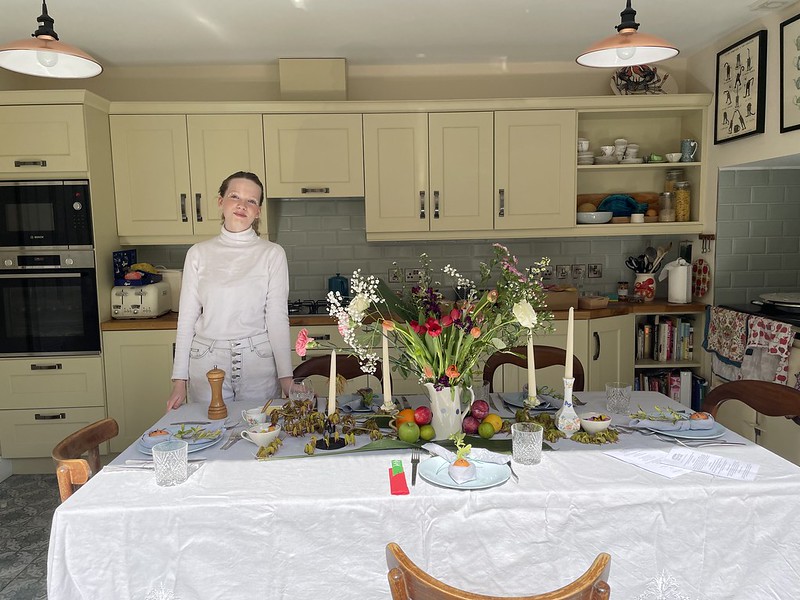 I was more into replicating cute bunny napkin arrangements I’d seen on the internet. 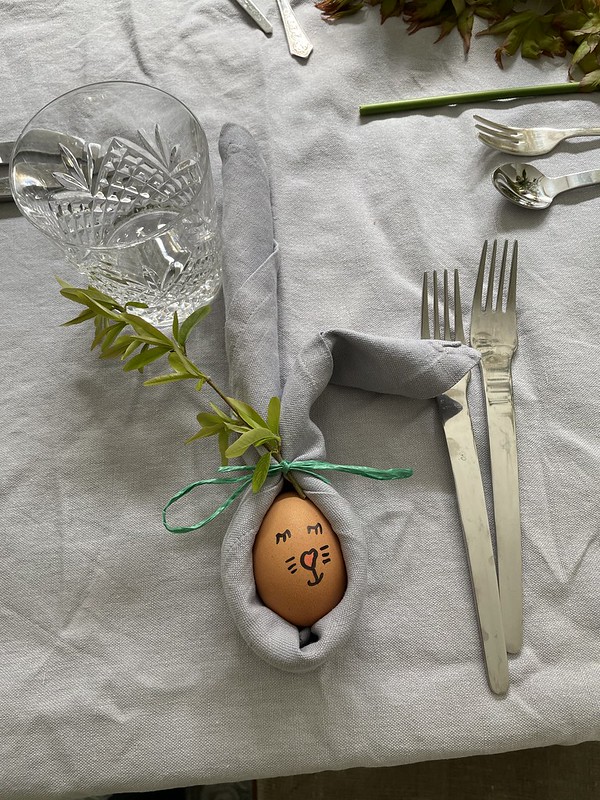 We were thinking next time we might even iron the table cloth. The gentlemen of the party, had a drink with the chefs/creative geniuses: 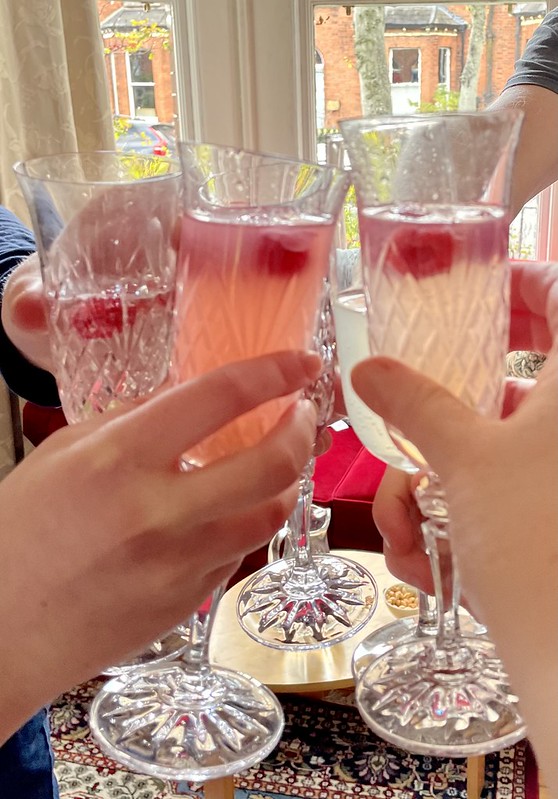 And then, warned that they needed to admire, they were escorted to the kitchen: 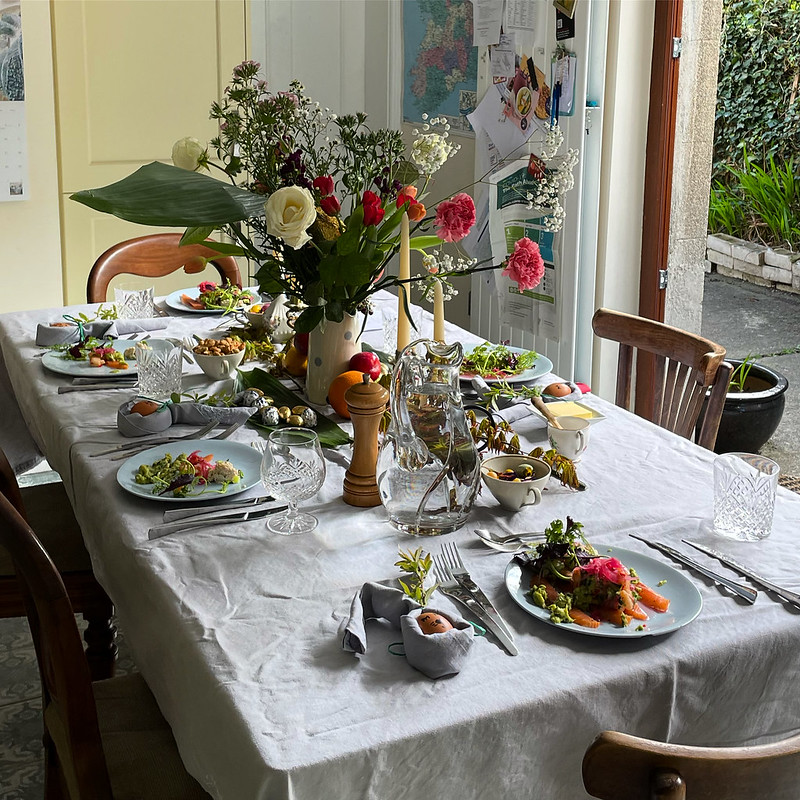 I must say the hamper was amazing. They promised enough food for six and they more than made good on that promise. There was the most enormous beef Wellington which is likely to be with us all week. All of the courses were superb – I would definitely do something like this again for Easter. Although our poor vegetarian had to make do with a Marks and Spencer offering for mains. Oh well.

After lunch we went for a walk round the block and dropped into the church. It is so odd not to be going to mass at Easter though much less odd than last year.

We talked to my sister, brother and aunt in Cork by Skype. My sister is the major Easter egg donor in our house so we had an unboxing ceremony for her. She seemed to enjoy it. Not as much as we did.

Herself was plunged deep into her studies. I decided that Mr. Waffle, the boys and I would explore on our bikes a hitherto unknown (to us) bit of the large park nearby. We were only half way there when it started to drizzle. We went in to a smaller park near our house instead and played frisbee in the drizzle which slowly and determinedly changed into snow. Not a perfect outing.

We continued our German TV watching. We switched to a show about a school on the grounds that the vocabulary might be more useful. However, we all pined for “Charité” and wondered how the tuberculin vaccine was going to work out [spoiler alert – not well] so we have decided to abandon the school show and work out how herself can usefully integrate late 19th century medical vocabulary into her German oral. I found myself reading up on Wikipedia about the characters in the show. Three of them won the Nobel prize for medicine. This got me thinking about how Germany was a powerhouse of science and medicine. When my mother went to Germany in the late 50s to do post-graduate work in chemistry, it was considered a fantastic opportunity. Ten years later when she met my father, German was still the language of a lot of scientific papers (they met because the college librarian suggested to my father that my mother might be able to help him with translating a German paper). I wonder is Germany still a world leader in science and, if not, why not? When did English take over from German as the language of scientific research? I daresay google knows.

I’m still on my Easter holidays but there is nothing to do. I did some German practice with herself. My own Leaving Cert German is coming back to me a bit but, even though my Dutch is almost entirely non-existent *, I find myself regularly leading herself astray by using Dutch expressions instead of German ones. I read somewhere that when you are struggling to find a word in a foreign language, often the word will come to you in your weakest foreign language – this certainly seems to be true of me.

Tomorrow is the last day of my Easter holidays and I am not as sorry as I generally am which is a sad reflection on the state of things.

*Despite a good year of classes and living in a Dutch speaking country – in my defence I lived in the French speaking part; Flemish people to a man speak far better English than I speak Dutch so I could only practice on young children and people tend to look askance at that. You would think that as Dutch is the child of English and German** I had a natural advantage, but yet I made no progress.

**An American friend of mine once shouted at Dutch radio, “Come on man, try a little harder, you’re almost at English”- I know what he meant.