I woke up the day after my second jab feeling slightly under the weather and very sneezy. But I was fine really.

I woke up feeling the picture of health. However, the nation was not in such good nick and indoor dining, which had been due to start July 5 was delayed until July 19 at the earliest. Alas, this wretched Delta variant.

Herself came back from her trip to Killarney where she and her friends had a lovely time. They spent 3 hours cycling around Killarney National Park. That’s a lot of cycling. They hired bikes and had to give a form of ID to guarantee them so, very reluctantly, her friend E handed over her passport (who travels to Kerry with a passport?) and then spent three hours worrying that it was going to be stolen. It wasn’t.

Herself got her braces off. Oh frabjous day. It’s been a long haul. The orthodontist spent the lengthy appointment mulling about why he left Belfast, “I said it was the troubles, but really it was Niamh.” Herself was not in a position to comment on his musings as she was unable to close her mouth but the practice nurse and he had a good old chat. I know for a fact that he is married to not-Niamh with 4 children so I hope he isn’t too inclined to share these thoughts.

It was a beautiful day and there were loads of people eating out, town was delightful. Mr. Waffle took the boys off ziplining in the Dublin mountains which was a hugely successful expedition except Daniel broke his glasses. Happily we had spares at home as he was off to Cork on the following day and is blind without them.

Mr. Waffle had his vaccine appointment at 9.05, he had been due to have it on Tuesday but had to defer as he had a work thing he couldn’t get out of. He was v pleased though to be fully vaccinated and in the observation area before his appointment time. I must say, they are flying through the vaccination programme, it’s very gratifying.

Daniel and Michael went off to Cork on the train. The journey was uneventful except for a crying baby. It must have been truly awful because another woman (described by Daniel as “looked like an experienced mother”) came down the train and picked the baby up. God the horror, the poor mother.

Mr. Waffle sent his Scottish friend in Vienna birthday bagpipe greetings – he felt that was the least he could do after she found the “Lola Rennt” DVD for us. He had seen the ad in the back of Private Eye and thought, “Who would want that?”. Well, now we know.

I went to the dentist and he took an x-ray. He spent ages complimenting me on the quality of my roots (yes, really) and told me that I was the only person he had seen that week with all of their original teeth (really?). On the bad news front, he says a tooth at the back is dead (this has been a long time coming – stay away from frozen mars bars) and I will have to have root canal on it. I am not looking forward to that and it is going to cost me a fortune. Sigh.

Herself came as well and the dentist complimented her on her new improved teeth which was good because she finds them a bit weird after so long in braces. I think they look great but I suppose I am not really the one to be pleased.

The three of us went for dinner in outdoors in a local restaurant. It was our our first time out to dinner since last summer and it was lovely. Herself ordered poorly though and to her utter mortification, the restaurant refused to charge for her main course as she had eaten so little of it. I will definitely be returning with my valuable custom.

Meanwhile the boys, having had a cruise of Cork harbour in the morning were having a delightfully unhealthy dinner in Cork.

I spent my money locally. I quite enjoyed it. I went to the picture framer who is only ever going to open by appointment in future, Covid or no Covid. While I was there, he turned away a man at the door who wanted to buy a framed print for €145 saying he had to make an appointment or purchase from the website. The customer was, understandably in my view, irate. Can this be a good business model? We should all go into picture framing, there’s clearly a fortune to be made.

Herself and myself went to all the nice food shops locally of which there are quite a few and bought various appealing things. One of the shops was giving away free books and despite the fact that we do not need more books, we found ourselves gravitating towards it and were unable to stop ourselves picking up a couple. Alas.

Herself had done a very thorough tidying of her room and had oceans of stuff to give away. I offered the text books on the neighbourhood whatsapp group but no joy. Why does no one need text books? There was a bouncy ball on a spring which had me in a quandry. The charity shops won’t take toys and I didn’t want to throw it out. I attached it to the front gate with a sticker saying, “Free to a good home” and couldn’t help noticing that the six year old across the road appeared to be having a birthday celebration (Covid compliant in the garden, I trust).

Mr. Waffle and I cycled into town to inspect the outdoor dining options. I mean, fine, but Ireland just isn’t a warm dry country and that is slightly problematic. On the plus side, when we came home, the bouncy ball was gone.

We cycled out for miles along the canal, beyond the Dublin ring road to drop herself to a friend’s house. We wanted to see whether it could be done safely. It could.

I had my last online bookclub. The next one will be in person because we are all vaccinated. How I rejoice! Online was better than nothing but meeting in person is much, much better.

We spoke to Mr. Waffle’s sister in England and her husband and four year old. She sang us her new song: “It’s coming home, football’s coming home…” I put my head in my hands to try to ensure that she understood that she is half Irish but that didn’t seem to put her off at all.

I had lunch with a friend. So wonderful to be returning to the lunch circuit.

I went out blithely without a coat. It lashed. Oh God it lashed; I got soaked on the way home. On the plus side, herself made dinner. She went all out to prove the deliciousness of vegetarian food. Not bad, I have to concede. 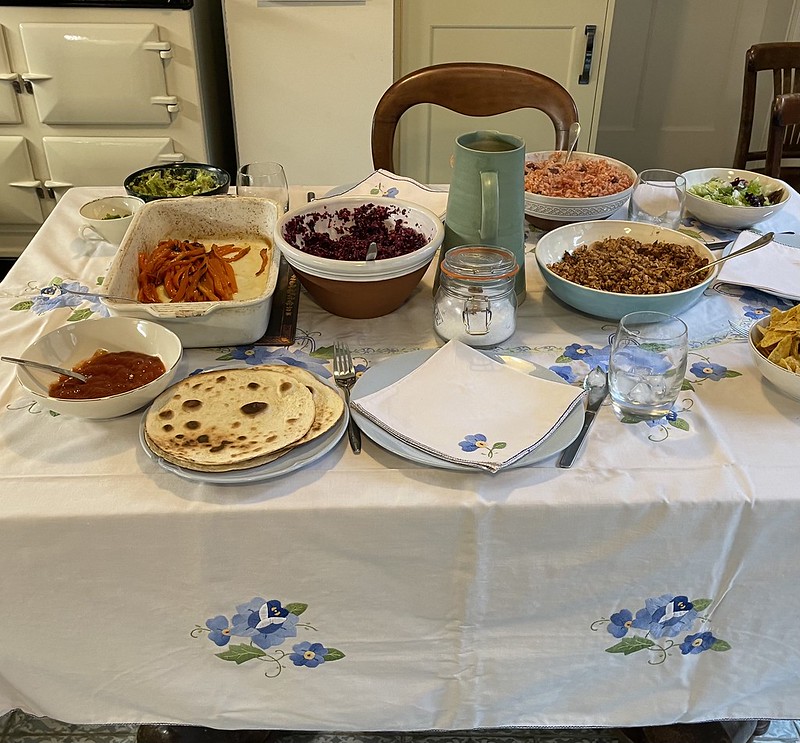 The boys came back. They had a great time: they went ziplining, played tennis and pitch and putt and spent hours playing Magic and other nerdy board games with my sister’s partner. I am so glad that they had a change of scene. In fairness, my brother and sister made a big effort to entertain them as well so I’m suitably grateful.

I had a dull headache all week. It was not better. Poor me. I couldn’t help wondering was it in some weird way, vaccine related even though it only started a week after I got my shot.

Finally restored to health, just in time for the weekend. Herself, very nobly, cycled into town with her brothers and deposited them in front of the dentist where I met them. The dentist pronounced himself broadly pleased but Daniel has to get two fillings. Alas.

Daniel and I went to shop for dinner ingredients and he announced that he planned to make Gordon Ramsey’s teriyaki salmon. Extremely pleased.

Herself headed off to her aunt and uncle in Cork for a few days.

I went out to a pitch miles away to watch Daniel play a GAA game. Alas, they lost. I chatted on the sideline to a local politician whose son is a handy mid-fielder. I mentioned where we live and she said, instantly, “Oh, I know where you live.” That’s politicians for you. Man of the match was this tiny little fellow who was half the size of the other boys. My son tells me that he is going to be representing Ireland in mixed martial arts. No wonder the larger boys stood well back.

The weather was manky. The boys and I went to mass. Limited seating available but they definitely lowered the average age by quite a bit.

After lunch, sparing the boys, Mr. Waffle and I went for an outing to Wicklow. We went to the German military cemetery. A fawn leapt into the road in front of us and wandered off into the hedgerow. We went to the Powerscourt Garden centre which was very satisfactory and the Avoca coffee shop which was not. I am a big fan of the Avoca coffee shop but on this occasion it was appalling. Seven young people behind the counter tried and failed to serve two groups of customers with anything approaching promptness. The Victoria sponge I ordered was still frozen in places. As we went out (still outdoor dining lads) to enjoy our purchases, we saw one of the staff wiping down tables with a squeegee floor mop. I mean it was wet but it didn’t overall increase confidence. 1/10.

Ladies and gentlemen, I give you, the summer of outdoors: 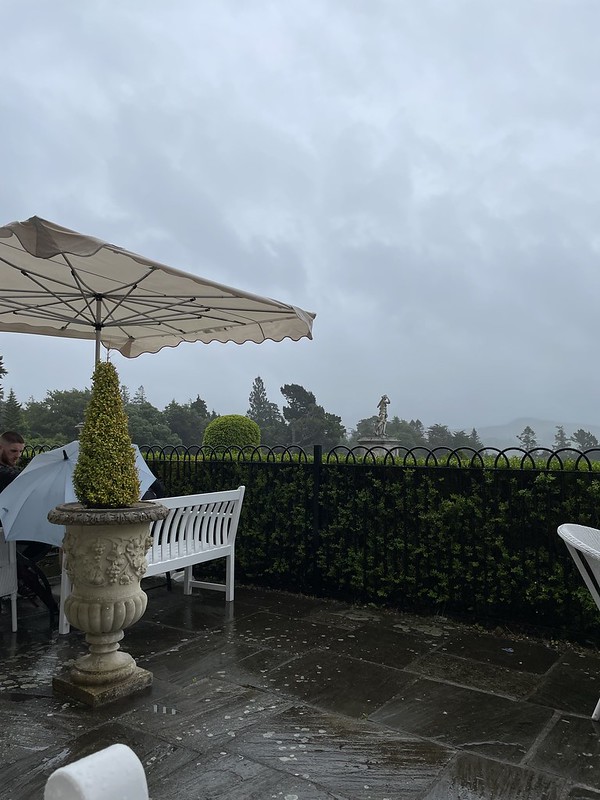 We wandered into Enniskerry which has been Disneyfied for the making of “Enchanted 2”. It was pretty crowded but the guards sheltering from the rain in front of “Beauty and the Book” assured me that it was the least crowded it has been. I was impressed despite myself by the impact of the movie magic. 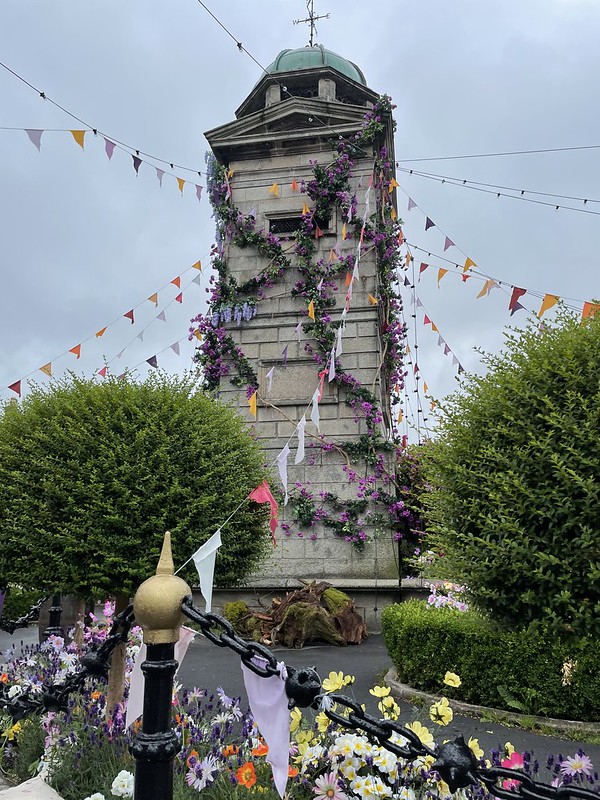 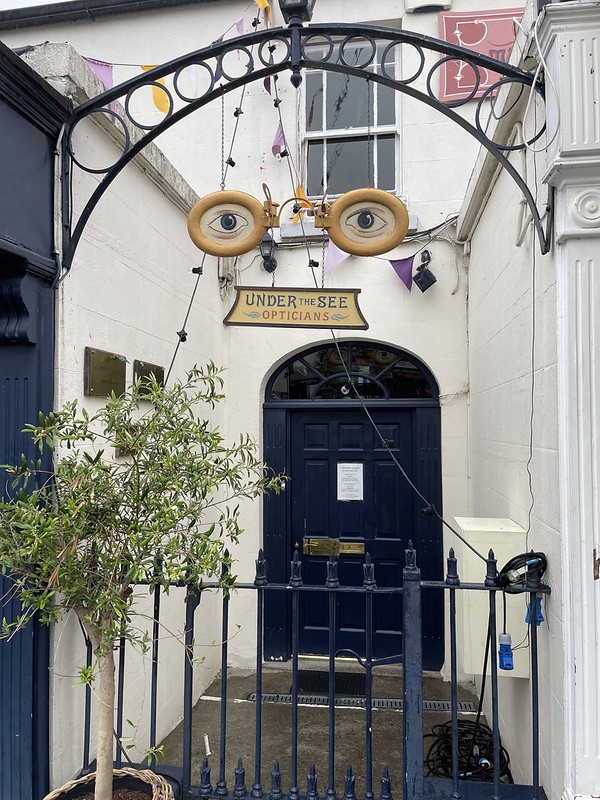 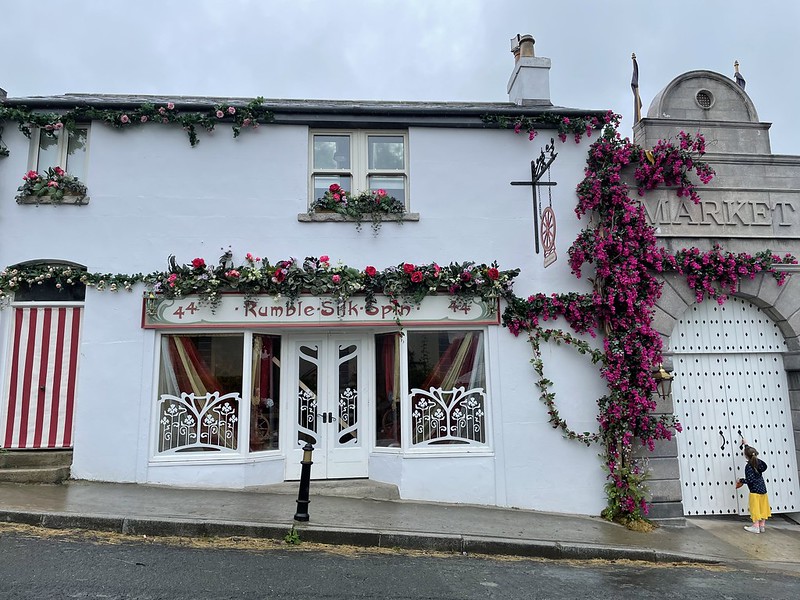 And even the Spar: 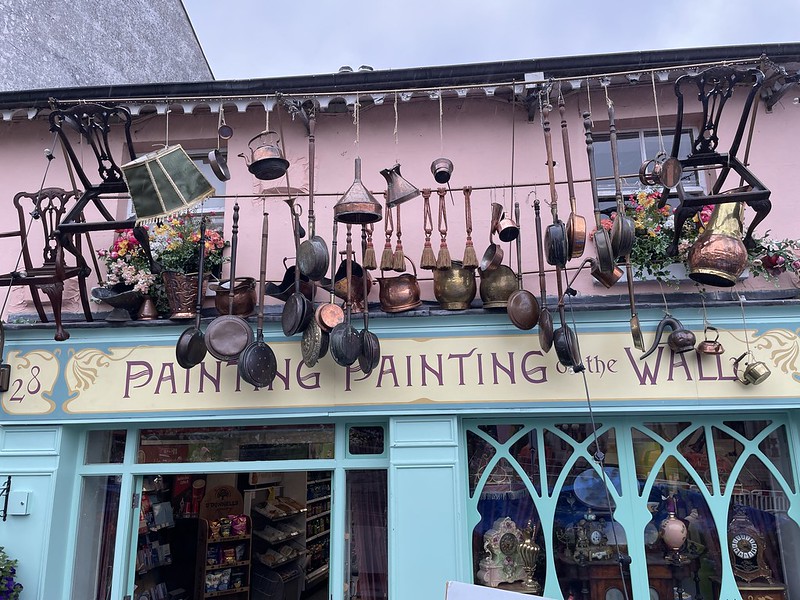 Meanwhile, herself cycled to Cobh with her uncle. When they got there, there wasn’t a train due for 90 minutes so they cycle back to Cork again. 20kms each way, lads. At least it wasn’t raining.

How is the weather where you are?