The plumber returned. He’s keen to finish at least. We drove up to Carlingford, Co. Louth for the first leg of our holidays. It’s about 90 minutes from Dublin so a short drive. We stayed in the delightful, though oddly named, Ghan House. Recommended.

We had lunch in the town which is right beside the hotel. Inspired by friends, I had booked us in for activities. After lunch we went zip lining. We all quite enjoyed it. The children are experts and I found myself reasonably alright except for the time I got stuck in the middle of the zip line like Boris Johnson at the London Olympics. 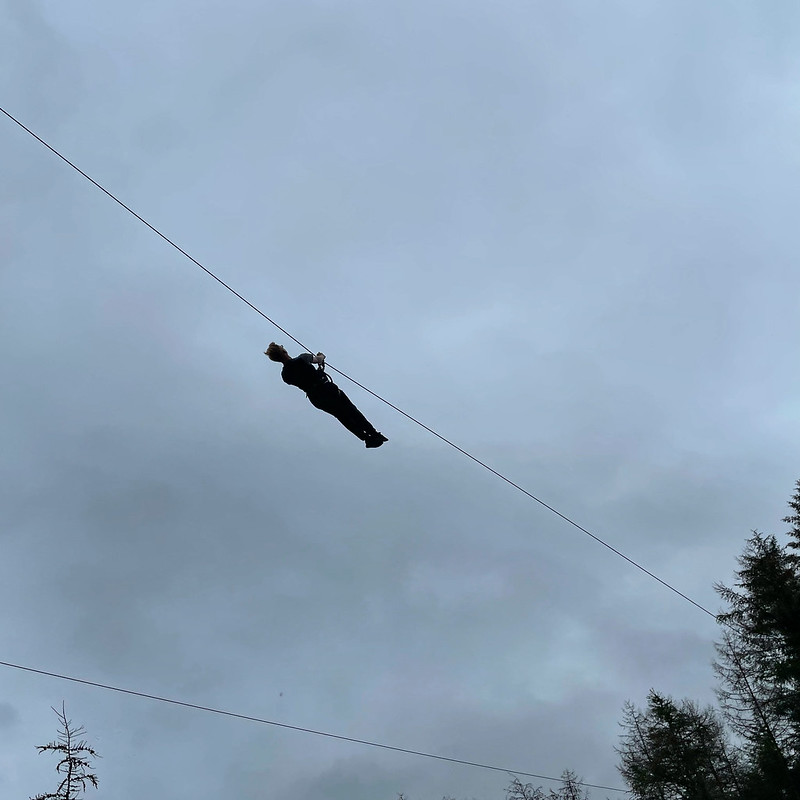 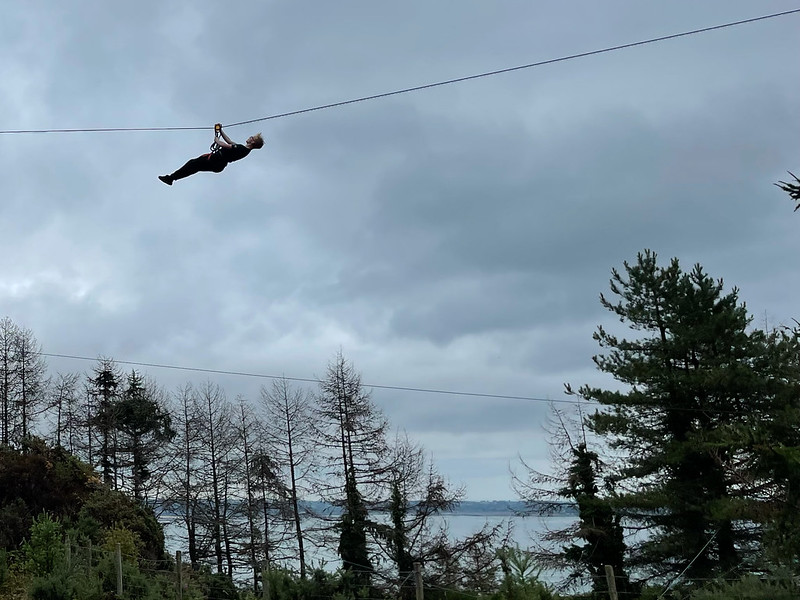 Our hotel restaurant, sadly, did not open for dinner on Mondays. We went into the town in hunt of food. It was not very successful. We were briefly seated outdoors at a pizza joint but no sooner had we got our legs under the (socially distanced, no you can’t move the tables together even if you are from the same household) tables than the waitress arrived out and said, “We’re not serving anymore, the kitchen is closed.” This was 8 in the evening but there you are. Mr. Waffle said that it was like the staff were from Communist Eastern Europe and were having no truck with the idle ways of the West.

We had a slightly difficult combination in that the boys and Mr. Waffle and I could eat indoors but herself as an only partially vaccinated over 18 had to be accommodated outdoors. Eventually, a nice woman took our number and our order and said she would call us when an outdoor table came free. We mooched around the (v pretty) town a bit. 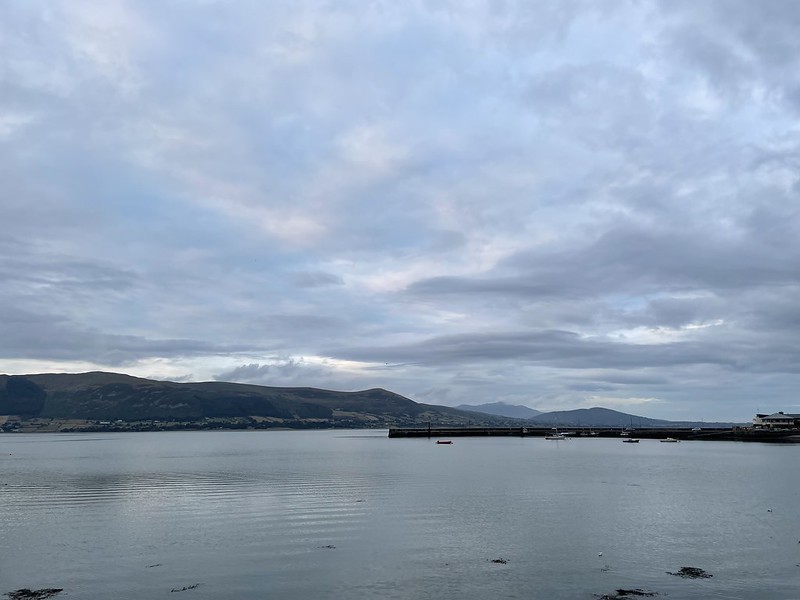 We admired King John’s castle. Imposing but, you know, we were a bit hungry. 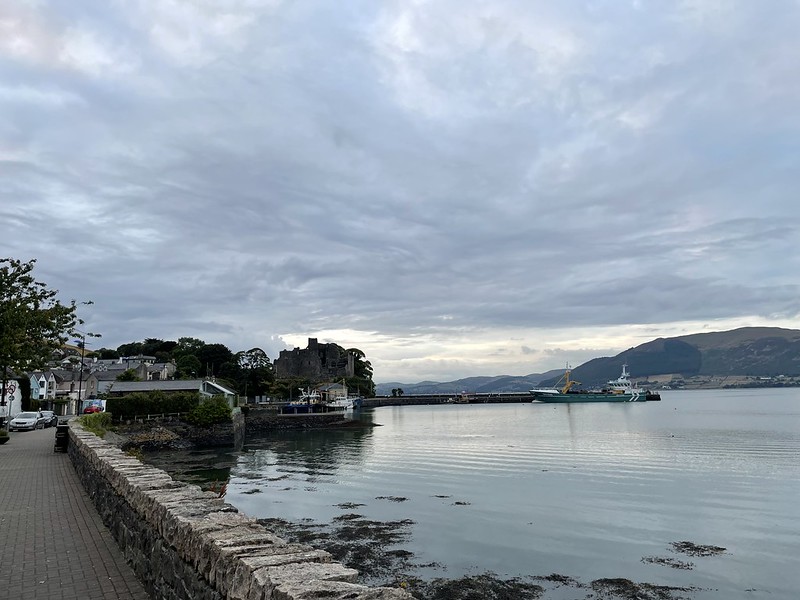 Herself suggested we go back to the hotel bar. There were no staff in but they had an honour system and herself went behind the bar with her hand sanitiser and got us all drinks. 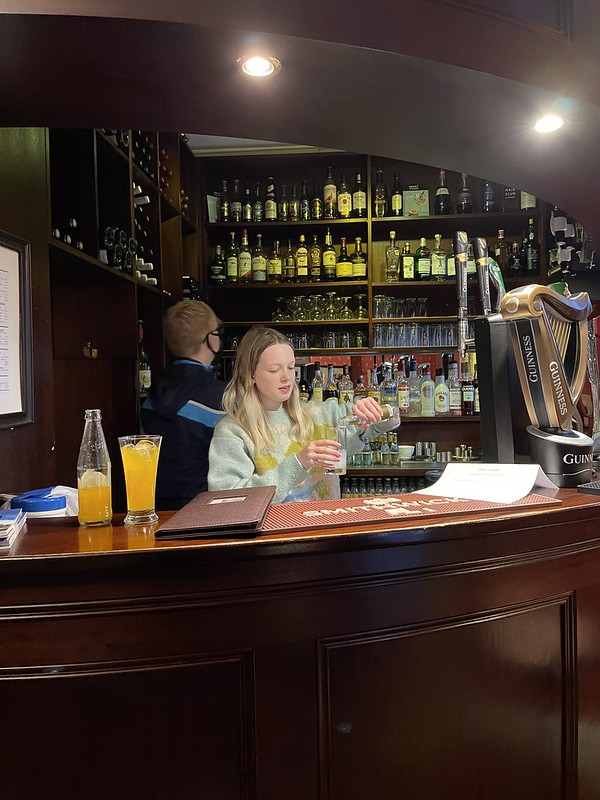 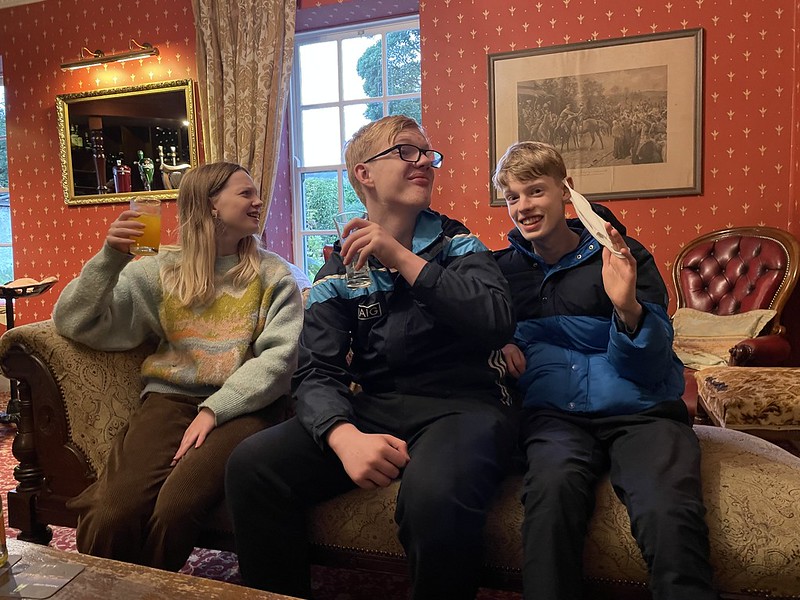 A great time was had by all but we were nonetheless, pretty pleased to get a call about 9.15 that our table was ready.

Carlingford isn’t perhaps the best spot for vegetarian options. Herself said that, having missed breakfast in the haste of our departure, she had had vegetable soup for every meal. Alas. 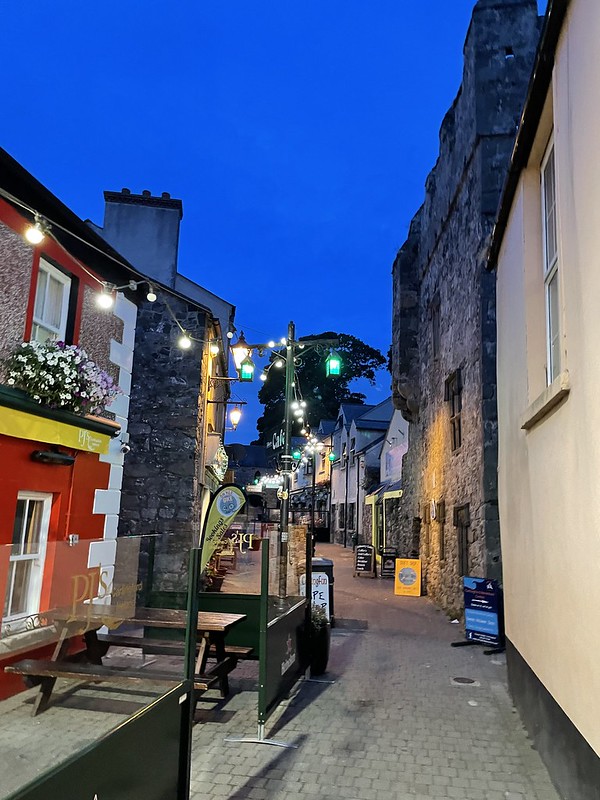 We were up with the lark to go off canoeing. I may have overdone the whole activity thing. Mr. Waffle and I had only a very brief opportunity to admire the view from what I think was the best room in the house. 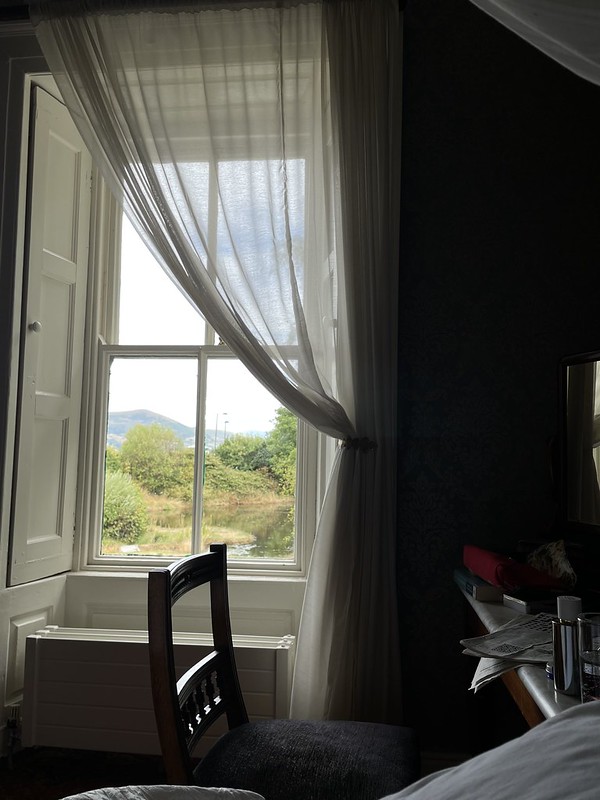 We trekked off to the adventure centre and down to the water where we all got into wetsuits. Herself said that Michael and I looked like “Fattypuffs and Thinifers“. Neither of us was delighted. However, the actual outing was fun and our guide took us to a cave and had us stand under a mountain stream which, due solely to his remarkable enthusiasm levels, we were all clamouring to try.

After our adventure, we drove out of town to this, pricey enough but pleasant, garden centre/shop/cafe. It was in the middle of nowhere and proof, as herself pointed out while we stood in the queue for food, that if you build it they will come.

We had a quiet afternoon, exhausted from our activities. I thought I had bruised my sides but it turned out to be muscles I never knew existed squealing in agony following the unexpected activity. I went into town and visited the craft shops. I love a craft shop but I am trying to stop buying things as my parents’ house is full of things that I will be finding a home for and where on earth will I put everything.

We had booked dinner in the hotel and, cunningly, reckoning that there would be nothing Michael would eat, when booking I had asked could they make pasta and pesto for him. It was not a success, he was offended and grumpy and as herself has observed, this family runs at the rate of the grumpiest member. So even though the other two ordered away and the food was good, Michael’s outrage hovered over the meal like a gloomy rain cloud taking from the general bonhomie of the party. It was the first time we had eaten indoors (confusingly, herself can eat indoors if she is a resident in a hotel) and the portents were good but, alas, it was not a success.

The activities continued unabated. We went to an escape room which was broadly enjoyable. In the course of our efforts to escape the young man who ran the centre had to give us hints via typed messages on a monitor. At one point one of the devices we needed was out of battery and I held it up to the camera gesturing that it was broken in the belief that he could see but not hear us. The monitor popped into life saying, “I can hear youse, ha, ha, ha”. This may have been moment of the match for me.

After the escape room triumph we went to the local library (small but with a very good selection of books), an antique/bric-à-brac place (where I restrained myself from purchase with difficulty mostly on the basis that anything I wanted to buy was almost certainly available in my parents’ house somewhere for free) and more craft shops. I was fascinated by this item in the antique place. What, we ask ourselves, was its journey from Milton Keynes to Carlingford? 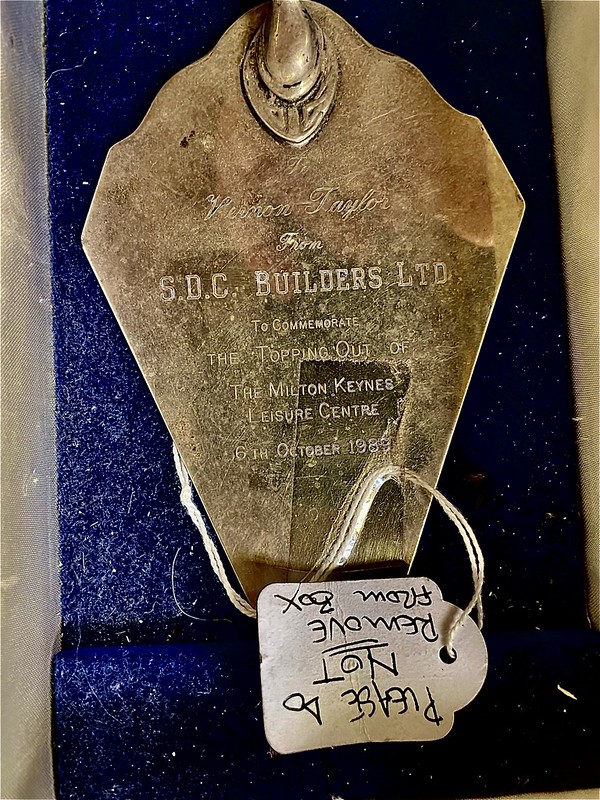 I enjoyed seeing a large dog make off with a slipper from a shoe shop with his owner in hot pursuit shouting angrily. The owner went back to the shoe shop and insisted on paying for the slippers although the woman in the shop was equally insistent she should not: it is a small town and they clearly knew each other. In fairness to the dog, I can see why it was hard for him to resist galloping off with this item clutched firmly in its jaw. 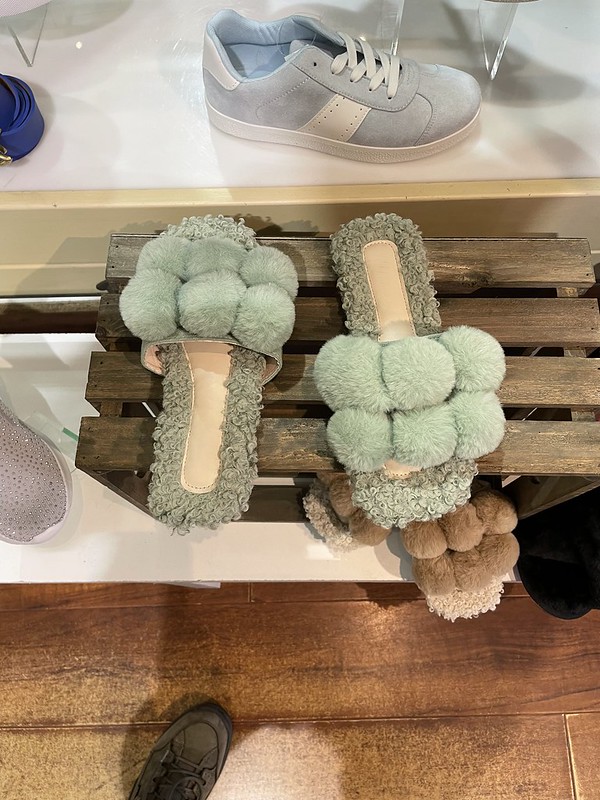 We had lunch at a food truck (in Carlingford, yes, very nice too, I have to say although it’s far from breakfast burritos we were reared etc.). I thought of visiting Dundalk or Drogheda but my friend from Dundalk pulled no punches in telling me that they were “fairly basic towns” with only St. Oliver Plunkett’s head to recommend them. The children balked at the saint’s head so, leaving that treat for another day, we headed home.

When we got home, the plumbers were still there, there was grit everywhere and herself announced bitterly that there was an (as yet unused) toilet in her bedroom. As I pointed out to her, if we had visited St. Oliver Plunkett’s head, it might all have been sorted before we got home. She was uncomforted.

I was up at 7 as the plumber was due at 7.30. You will recall that the work was to be finished last Friday. Mr. Waffle and I went out for breakfast leaving the children in bed. We ran into the postman who said that he had tried to deliver a parcel to us yesterday. We knew because we got the notice to collect it from the depot. “Never mind that,” said he, “I’ll drop it into you about 10 in the morning.” In fairness what a service.

We had invited friends of ours (a family of six who were over from the Netherlands – she’s Irish, he’s Dutch and the children are a mix but all v tall) to lunch. When the invitation was issued, we did not expect that the house would still be full of workmen who from time to time, as the mood suited them would turn off the water. We made a beautiful plum tart from the plums in the front garden. It looked amazing but, oh dear, tasted unbearably bitter. Alas. 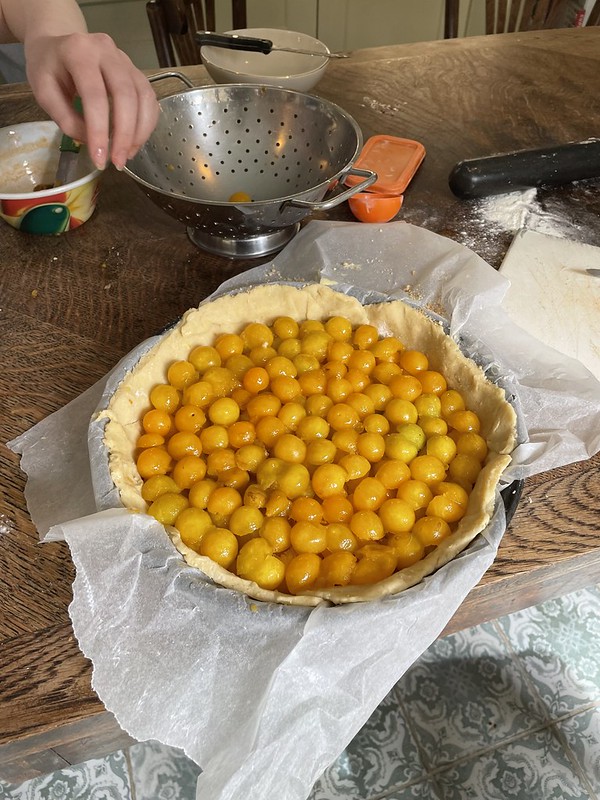 Notwithstanding the logistical challenges, it was lovely to see our friends. The children all get on and we were all invited to our friend’s 50th birthday in the Hague in October. Very exciting. She made me laugh by telling me about her brother getting a new sign for his pub. The sign writer asked him, “Where do you want the apostrophes?” As though they were a decorative feature.

The plumber left without installing the sink which, for mysterious reasons, is not available until Monday week. Look we have a toilet and a shower. It’s a start.

A plumber free morning. Mr. Waffle took Daniel to a dentist’s appointment at 9.30 which I appear to have made in a moment of insanity. I believe my thinking was, let’s get it out of the way early. I dragged myself out of bed at 9.30 so that I would be up to let the postman in. Inevitably the doorbell rang at 9.35 while I was in the shower. I scooted down swathed in towels to pick up the parcel. The postman was unfazed. I assume he is well used to seeing people in various states of undress.

I made more jam. I am sick of jam. And it now appears that apple season has started. 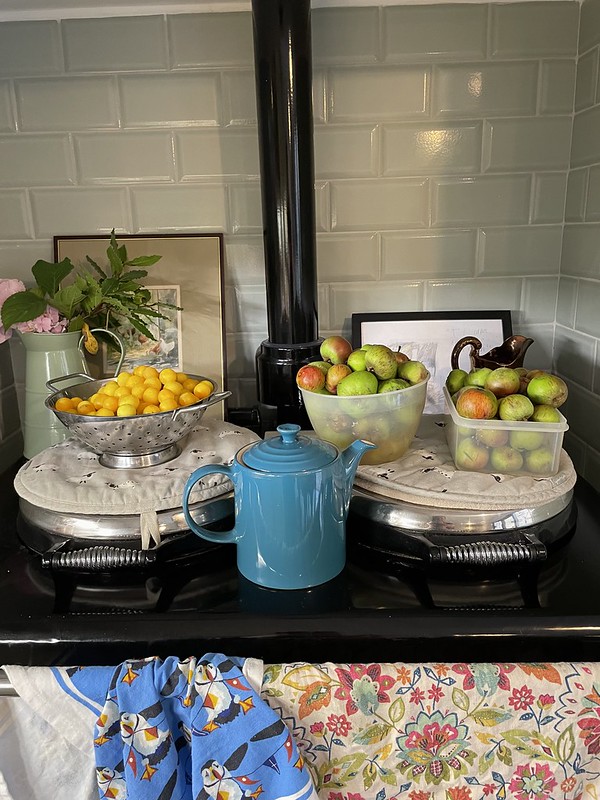 We were supposed to go on a sailing trip around Dublin Bay in the afternoon. “No experience needed just buckets of enthusiasm,” said the website. I had definitely overdone the activity drive and no one, least of all myself, was in a position to display anything like buckets of enthusiasm so I was delighted when they rang up to cancel because of the weather.

A nice lady who lived on the road died. She was a great gardener and had given everyone cuttings over the years. A saintly neighbour offered to make up a bouquet for her from flowers from our gardens. Everyone was keen and she was immediately inundated with messages from people on their holidays saying, “Take stuff from my garden.” She did an amazing job and made up two big bouquets using all the flowers which seems to have been a big hit with the dead woman’s family.

One of the other neighbours said, “We must get you on to the flower arranging team for the church.” No good deed goes unpunished but I think she will probably be alright as she is, I believe, Protestant and it’s the local Catholic church for which her expertise is being sought. I’ll leave them to figure that one out themselves.

I did almost nothing, exhausted by my week of exertions. My brother was supposed to be in Dublin for lunch but only made it about 6 which is late, even by his notoriously lax standards. A bale of hay fell on the motorway and chaos ensued leading to hours of delay. Really. He went straight out to see friends but is supposed to be spending the night here. We await developments.

As I was making more wretched jam in the afternoon I listened to an excellent podcast about the two girls who nearly drowned on paddle boards last summer. Sounds a bit niche but the nation, including me was rivetted by this (ultimately) good news story at the time. It seemed so improbable that they should have been rescued and, listening to the story, I am even more surprised that they made it. The families involved sound like lovely, lovely people and the whole thing is well worth a listen.

On Sunday, we are off to Sligo for week 2 of our holidays and then Kinsale for week 3. I will update you on our return. I am sure that you are on the edge of your seat out there.