Herself is home! Let joy be unconfined. It is lovely to have her back. I thought for a while that she might not make it home and I was gutted. I am surprised how thrilling it is to see the light on in her room.

I’d forgotten how much blogging content she provided. She described our interactions at dinner the other night as like a poor man’s “My Family and Other Animals”. “We only have one cat” her brother Michael said defensively. As well as staying with her London relatives, she went to stay at a friend’s house before coming home. Her friend’s father said, “I’ve been to Dublin once, it was the only place I ever saw people having sex outside.” “The Phoenix Park?” enquired herself. Yes. “And we had a lovely dinner in a Michelin starred restaurant,” he added. “Guilbaud’s?” she asked. Yes. I am glad to think that her upbringing has prepared her well for engaging with English people who have visited her home city.

I finally got to the dentist to get my permanent crown installed. I am delighted with myself notwithstanding the not inconsiderable bill. I really hope that this is it for the dentist for at least six months.

On the way home, I stopped at a pop-up antiques shop on Ormond Quay. It’s a bit off the main drag and an older gentleman, maybe mid-60s, was manning the shop. I wondered whether he had had any trouble. None at all and in fact, he had already sold two shops worth of stuff, if you see what I mean. We had a grand old chat about mahogany furniture and its return to fashion. He told me about his early days in the antique business, I told him about attending auctions with my mother when I was a child. It was delightful until he said, “People of our generation…” Just because it’s true doesn’t make it a great deal more palatable.

I got my booster jab yesterday in a chemist around the corner (Pfizer, since you’re asking). It was a bit disorganised and I am hoping that the paperwork will be ok. I had a sore arm and felt a bit seedy today but am broadly fine. And glad to have had it.

The government has announced that hospitality – restaurants, bars, pubs – will now close at 8 in the evening. Alas, alack. So much for my dinner booking – sourced with great difficulty – on December 28 at 9.

We have got a quote from a builder for knocking down the scullery and replacing it with a completely standard, no frills, no whistles, square box. I’ll tell you this, building inflation is real. I’m not really inclined to go ahead at the breath-taking cost proposed. The neighbours who are also planning to knock their scullery and to then replace it with an elaborate extension and put in a wine cellar got a quote of double what they were expecting. We were moving in tandem as our scullery roof is shared. However, in view of cost, building works may not, in fact, proceed in the new year. On the other hand, it would be handy to have it done while some of the children are still at home. But will we be able to pay their college fees, if we go ahead? Welcome to my middle class hell.

Last night we watched “A Muppet Christmas Carol” – MIchael Caine’s best work – so we are pretty much Christmas prepped. Yourself? 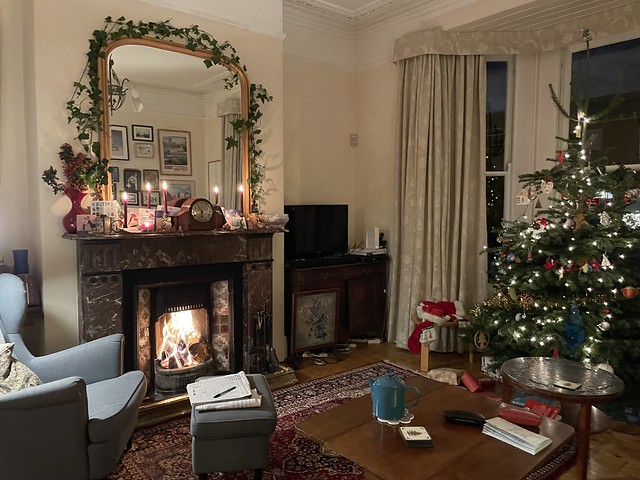