Last Friday night Michael, Mr. Waffle and I went to see “The Tin Soldier” in the Gate (Daniel was in Rome). It’s by the theatre company that did “A Feast of Bones” which remains one of the most successful plays, I ever forced my children to see. Friday night’s play was good but it wasn’t brilliant. There was some really amazing dancing in it and some very clever things but the script was a bit over complicated and didn’t quite hang together or I wasn’t smart enough to follow it fully – take your pick. The audience seemed to like it and so did Michael so a win overall. I don’t mean to boast but the main actor and I share a hair dresser and I thought his hair looked pretty good: I take my thrills where I can.

I have been to the TUD and NCAD graduate art shows. I haven’t bought anything but it’s just a question of time and wall space, I assume. There were some interesting things in both shows about young people’s experiences of the pandemic and the housing crisis and some pretty odd things that did not float my boat but I suppose that is the way of these things. The new building with beautiful views over the Dublin mountains was a bit of a star of the TUD show. 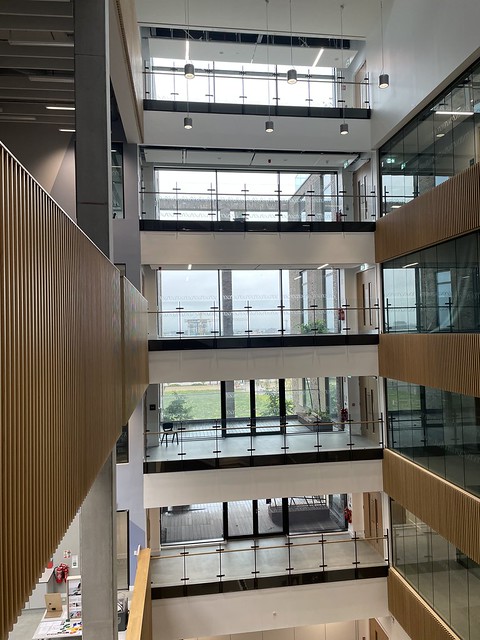 Our next door neighbour’s first born is about to become or is already an NCAD graduate [how can I keep up, only five minutes ago she was in primary school] and she painted this picture on the concrete wall in the lane opposite the back of our shed. Every time I take my bike out and see it, it fills me with joy. It’s based on a sketch she did from a boat off the Cork coast. She has yet to charge us for it despite constant urging her to do so. I think she feels it’s unfinished but I think it’s perfect. 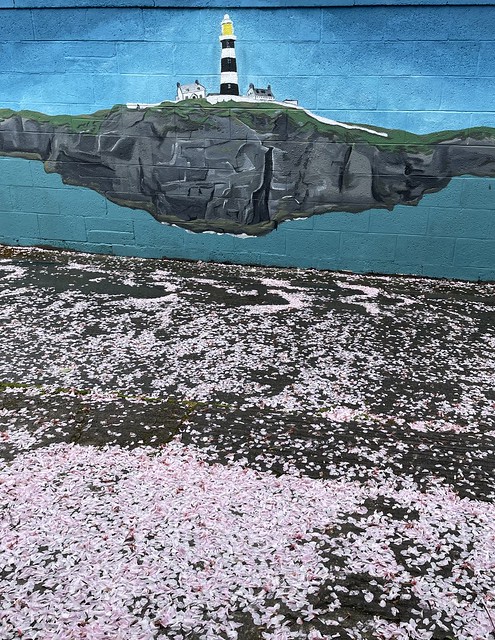 I went to Bloom in the Phoenix Park for the first time. I have heard rave reviews. I am unconvinced. It’s €25 to get in and then you are invited to spend more money on food, plants, garden furniture, crafts, garden rooms, random gardening tat and random tat. The actual show gardens are relatively few and surrounded by people pressing against the ropes peering in. I do not think I will be back. I did buy a very lovely hand mirror from this crowd though. It seems to be a one man operation and I think Warren himself lovingly wrapped my mirror.

Here are the photos I got hanging over the ropes of some of the show gardens: 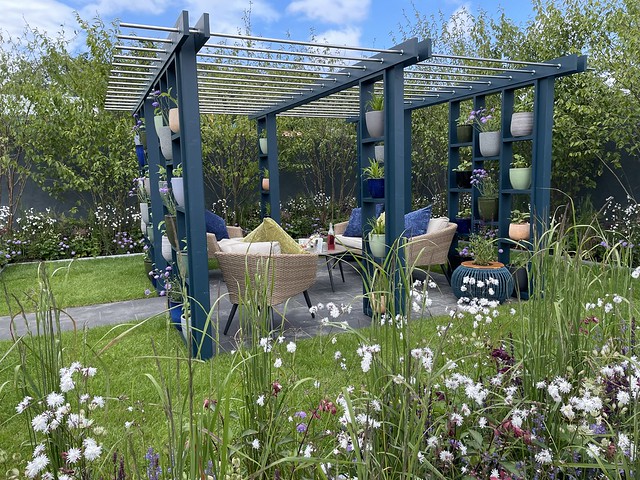 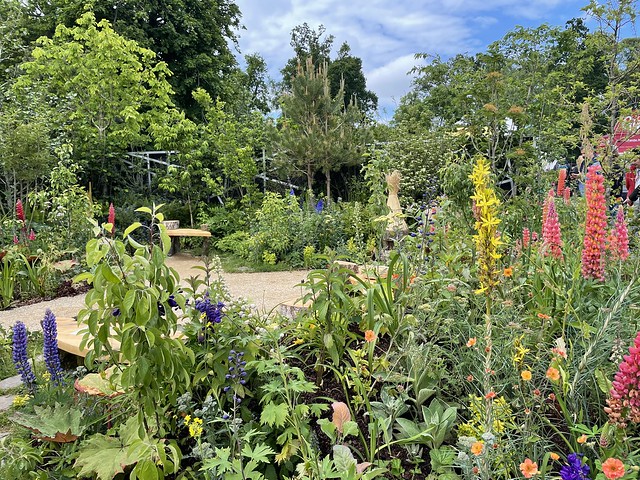 And here is the grim reality: 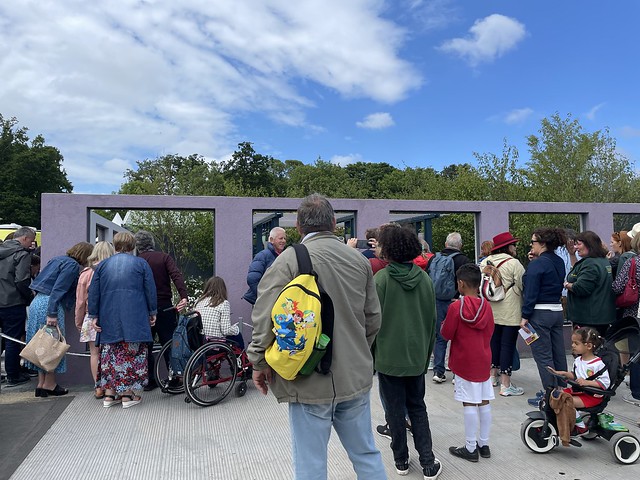 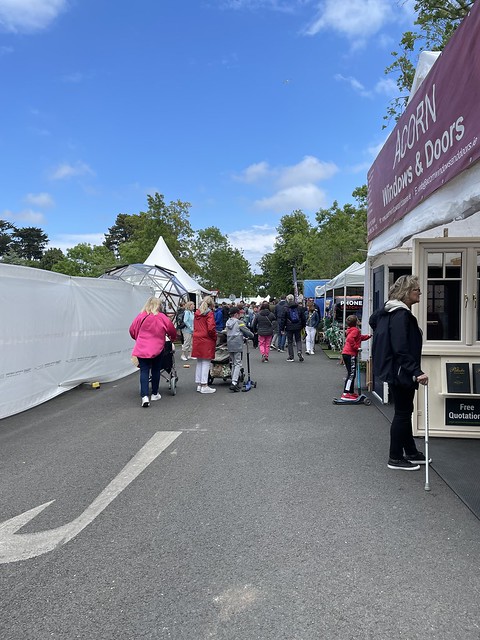 And here is a shot from inside the walled garden of the Phoenix park where you can get in for free all year round (except during Bloom, it transpires): 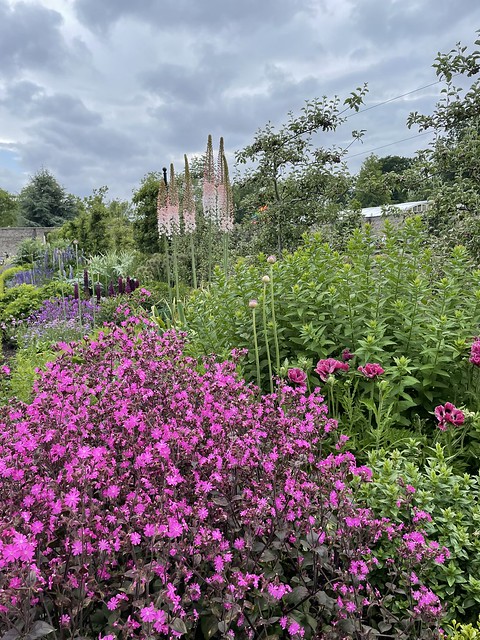 Mr. Waffle and the boys and I went to see “An Cailín Ciúin“. Loads of people had recommended it to me. One of my friends from bookclub went because the young star was in sixth class in her children’s school and all of the parents were encouraged to go (I mean it’s an Irish language film, I don’t think they were expecting even the modest success that they enjoyed). I was a bit reluctant as my experience of Irish films is that they are gloomy. But it won a couple of awards in Berlin and I decided to give it a go. It was gloomy. Really beautiful cinematography (often, in my view, the kiss of death in a film). I found myself thinking, “Of course the Germans loved it, it’s a certain vision of traditional Irishness”. It’s set in 1981 and the young protagonist is the same age as myself and although some elements are very recognisable (ah the uncomfortable plastic hairband), it didn’t seem to be quite the Ireland I remembered but I am a city child and it is a country story and, of course, recollections vary. It is beautifully shot and acted but there’s no getting away from it, it’s sad. Still the boys loved it.