We arrived safely in Berlin. Our luggage arrived safely in Berlin. We were able to travel direct to our Airbnb by train from the airport. The wonderful Germans, as a summer experiment, were charging €9 for all transport tickets for the month. We could have gone to Bavaria for €9 each but instead we just travelled all over Berlin. Honestly, what fantastic value. The public transport system in Berlin is excellent as well. I mean it was hot but already, financially, it felt like a big saving over Sweden.

The house when we got there was a 19th century flat with parquet floors and high ceilings. It was also home to two artists and their children. It was slightly disorganised and untidy but quite homely. I opened the door beside the bathroom and there was a biggish room filled to the ceiling with all sorts of random stuff recreating the effect in my parents’ attic. A very Bohemian vibe. “What exactly does Bohemian mean?” asked Dan. “You know, a bit arty,” I said. “Oh,” he said, “I thought it just meant poor.” Alas. I contacted our host Jan to ask where was the mobile air conditioning unit which was referred to in the ad. “It’s an old apartment with high ceilings, it holds the cool of the night into the day,” said he. Yeah, there was no air conditioning unit. And that was only partly true about holding the heat of the night when the temperature is over 30 degrees. 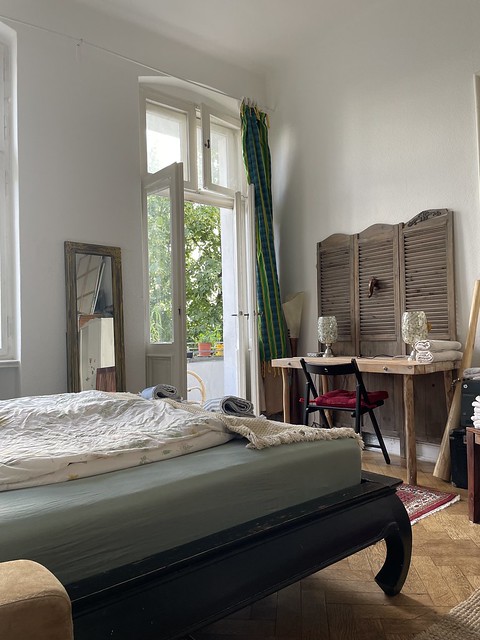 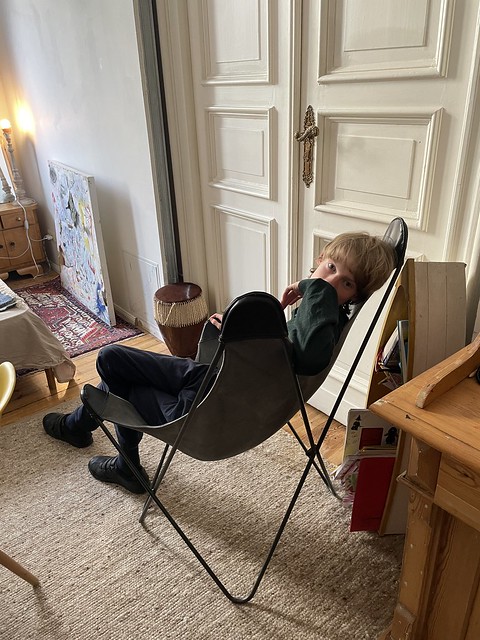 We went out for our dinner on the street and discovered that we were staying in the most wonderful place: full of restaurants, cafes, and lovely old buildings, lively but very safe. Such were the gentrification levels that even in the arches of the city commuter railway (the S-Bahn), there were all sorts of lovely shops and cafes. In my previous experience railway arches leave a lot to be desired. The area is called Charlottenburg and I can unhesitatingly recommend it for all your Berlin accommodation needs. It’s perfect. We were about a minute’s walk from the S-Bahn station which was super handy but was a bit loud at night. Windows had to remain open all night or we would die. 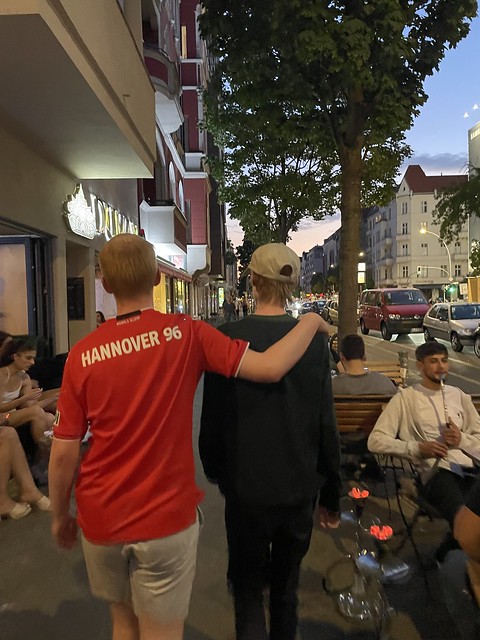 Leaving the boys in bed to recover from the exertions of the previous day, Mr. Waffle and I went out for a stroll around the neighborhood. We were a stone’s throw from the Kurfürstendamm (Berlin’s main shopping street). It is very chic and I found myself saying mournfully, “You know O’Connell Street could be like this.” O’Connell Street is Dublin’s main street. It is not very chic but it has similar dimensions to the Kurfürstendamm .

We passed the house of Rudolf Diesel. Who knew Diesel was somebody’s name? Poor Rudolf, he has a lot to answer for though, like many another thing, I’m sure it seemed like a good idea at the time. 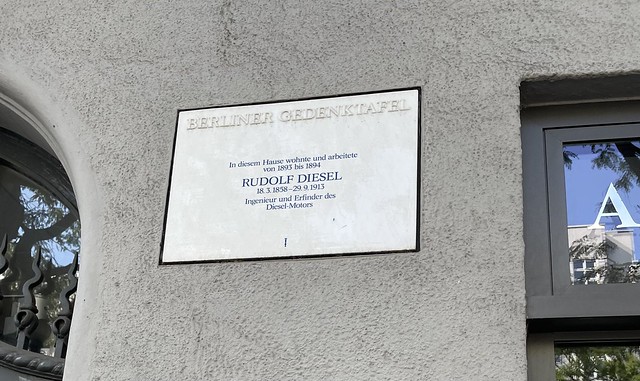 As befits a trendy happening city like Berlin, there was a poster campaign supporting the introduction of a basic income scheme. 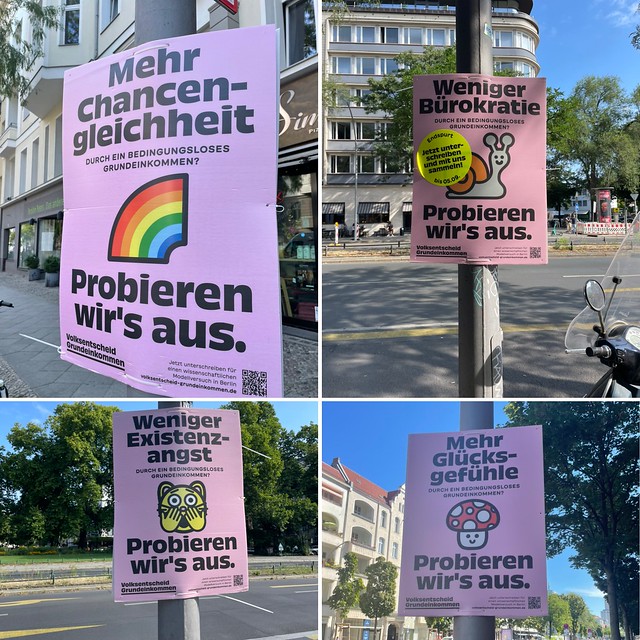 We had breakfast in the garden of the Literaturhaus and it was absolutely lovely. I couldn’t help feeling (gleefully) that my gloom about Berlin had been entirely misplaced. 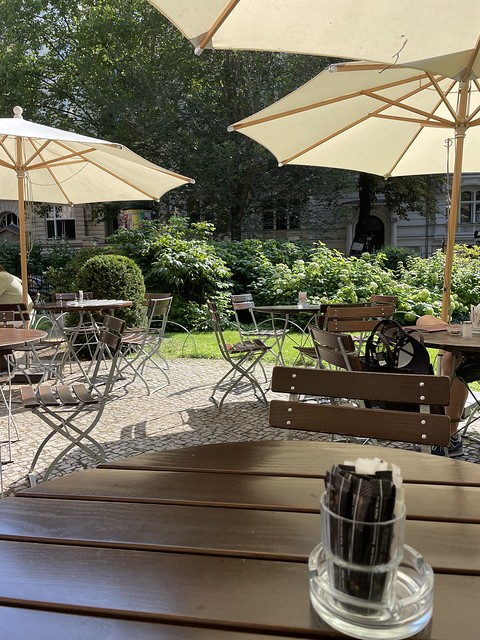 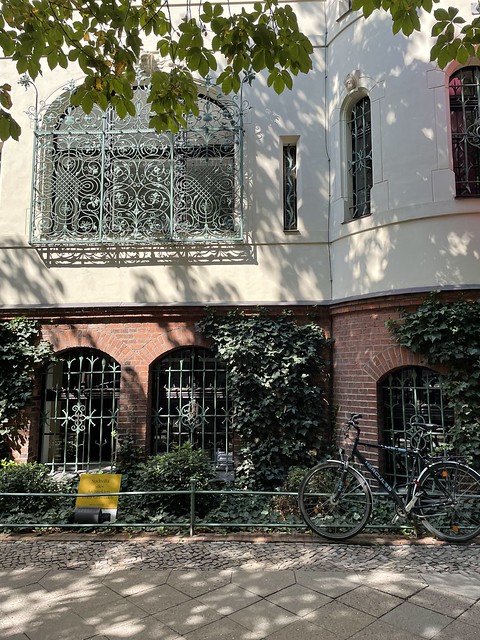 There was a lot more mask wearing in Berlin than there had been in Sweden or than there is in Dublin (where masks have pretty much disappeared entirely) and on the non-air conditioned public transport that took a bit of getting used to but I was surprised how quickly we got used to it though always very warm.

We went to the Brandenberg Gate for a look around and as we were standing in the shade panting from the heat, someone called out Daniel’s name and half a dozen beautiful girls descended upon him. It turned out that they were friends of his Italian exchange and Daniel had met them in Rome. The girls were in Berlin for the weekend. I mean, what are the odds? I was absolutely charmed. It ‘s so nice to see him having a chance to meet more people from other countries now that Covid is over (more over in Dublin than Berlin, mind). 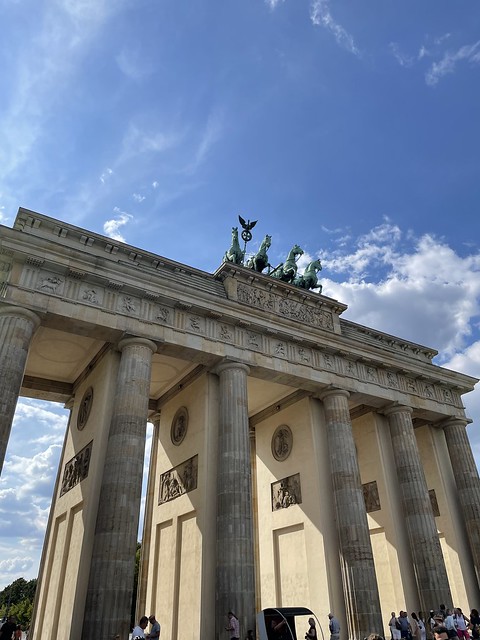 We walked down to the Holocaust memorial. Berlin is full of references to the Holocaust. Everywhere there are Stolpersteine – these show where Jewish families once lived before they fled or were taken to the concentration camps and killed. World War II is everywhere in Berlin; much more so than any other German city I have visited. In the station opposite the KaDeWe department store there is an enormous sign indicating that it was a point for deporting people to concentration camps and listing the destinations where most of them probably died.

We went to visit the DDR museum which is relatively small. It was strange for me because I was in Berlin in 1984 on a language exchange when the DDR was still with us and I kept looking at things and saying to myself, that happened after I was here. My host family let me see the wall I think, though they weren’t particularly keen, but only a day or two after my arrival, to my intense chagrin, they whisked me out of Berlin and brought me to Bavaria on a two week hiking holiday. I had plenty of walking and scenery at home, so I would have preferred to stay in Berlin. I do remember when we were leaving in the car, the East German border guards threatened not to let me through but in the end they relented (unusual). Now I find the idea of a long drive through East Germany fascinating but then I found it pretty dull and I retain no real recollection of the surrounding scenery or anything else. I didn’t think much of Benediktbeuren either. Teenagers are difficult to please.

My mother was in Berlin in the late 50s and as well as buying some dual language books in German and Russian (and not easy ones either, Gogol features) which still grace my parents’ bookshelves (her plan to teach herself Russian through German was largely unsuccessful), she was detained by the East German police for jay walking. She was a free spirit but this did make an impression. So over three generations, my mother was in Berlin before the wall went up, I was there during and herself was there after. Berlin has had quite the 20th century. It turns out that like the Balkans, Berliners make more history than they can consume locally.

I inspected every exhibit in the museum. Daniel tried out the full size Trabant they had installed. 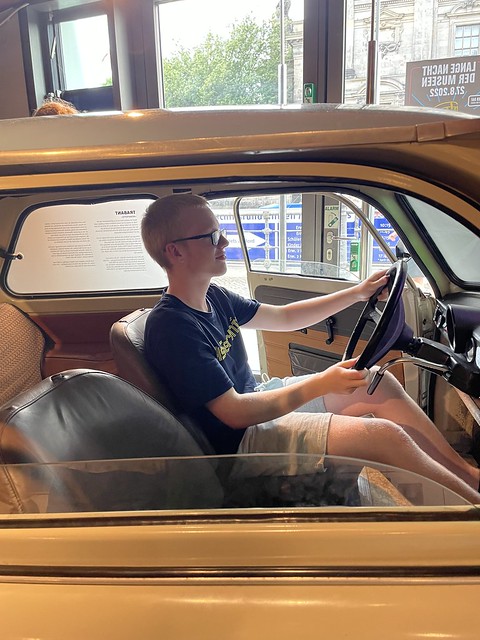 Here’s some East German propaganda indicating how dangerous it was for their citizens to go to the West. That’s why they had to wall them in. As they say on the airlines, “For your convenience, and especially for your safety.” 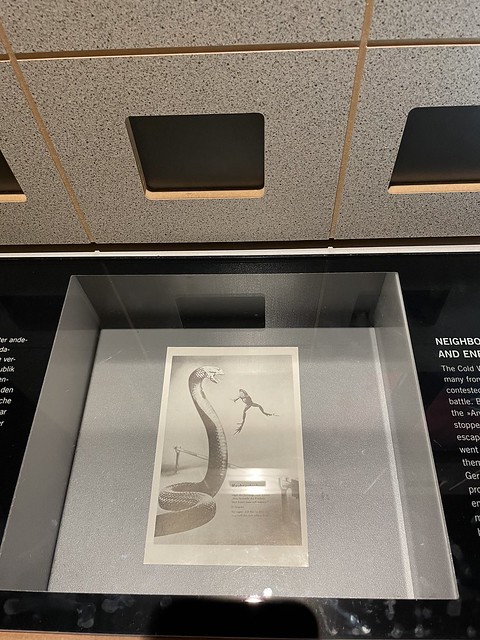 The men lost interest before me and I came outside to find them sitting outside where the temperature had gone down (slightly) and there was a nice view of the cathedral. They seemed a bit put out by my desire to get full value by inspecting every single thing in the museum. 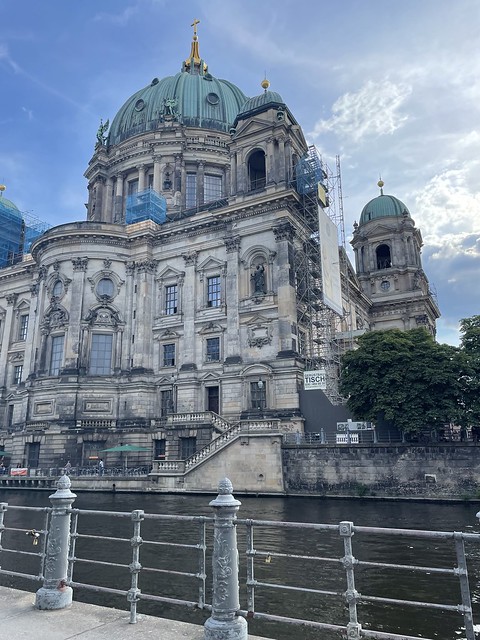 When we got home the four of us spent a long time bouncing a small rubber ball across the dining room table trying to make it bounce seven times in a row. It was a game of Daniel’s invention and surprisingly entertaining but eventually Mr. Waffle made us stop in case we were driving the people downstairs crazy.

Mr. Waffle and I went out to breakfast again. Berlin is a city that appreciates breakfast. There were many, many options. We went to somewhere trendy and expensive. Nice but positively Swedish levels of expense and not a lot nicer than the 100s of other spots within a stone’s throw of the quite delightful Savigny Platz.

We went out to the computer museum. It was a bit of a trek and I put the boys in charge of getting us there which they did admirably. 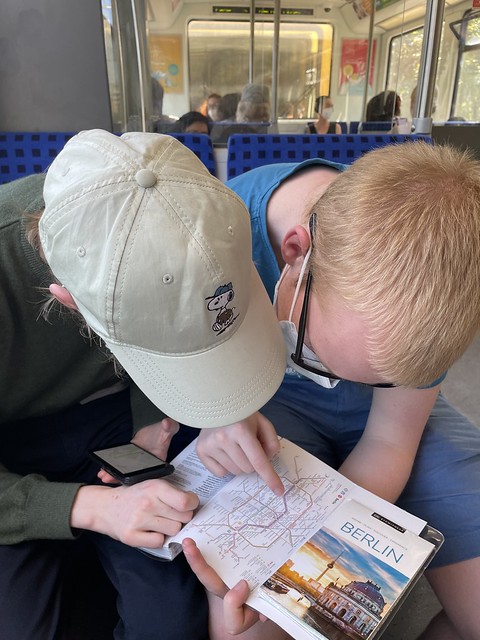 We got a guide to Berlin out of the library (pause to yet again sing the praises of the library service) and I found it great. There is something very satisfactory about a hard copy guidebook. I find it much more comprehensive and useful than internet advice. Possibly due to coming of age before the internet. 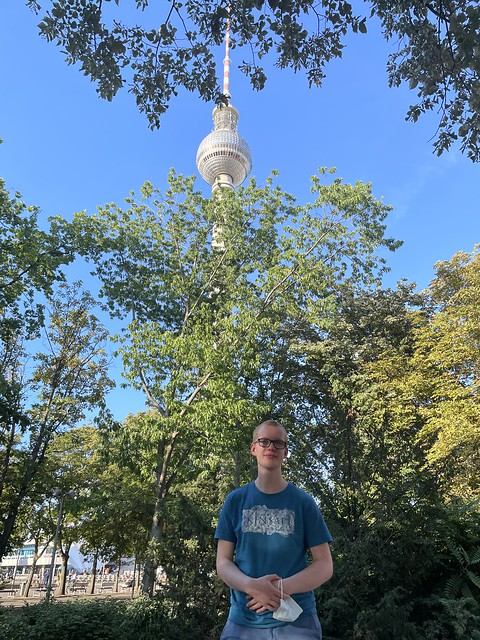 The computer museum itself was not fantastic although there were a lot of free computer games once you got in. I was defeated on Pong by my sons despite having played it quite a bit at a friend’s house in the 70s. However, my hours of playing Tetris were not wasted as I managed to defeat Michael (actually, to be honest, they probably were wasted). It was quite toasty in the museum so we didn’t stay very long. 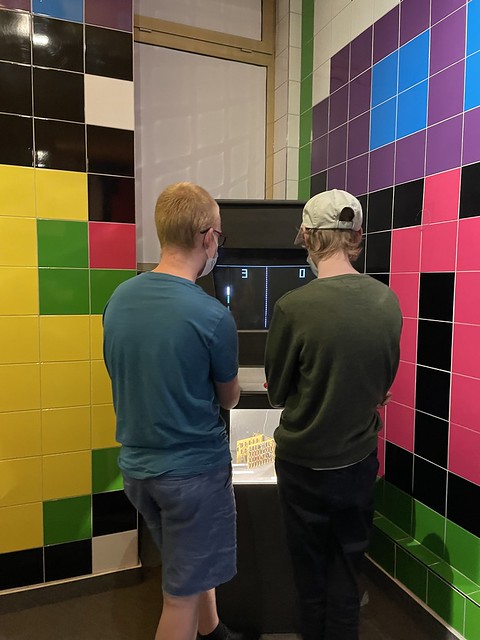 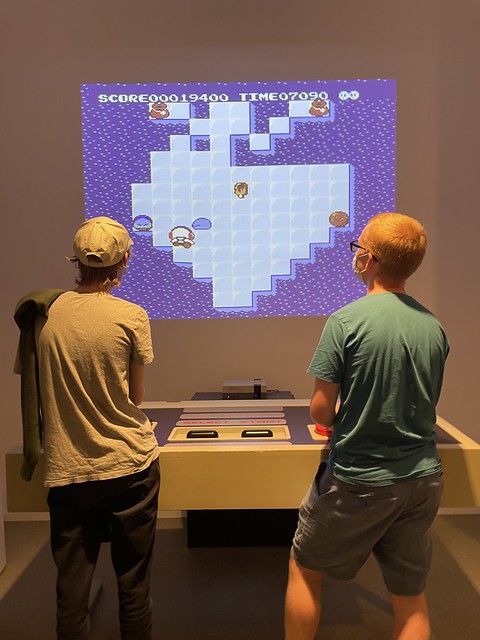 The computer museum was on Karl Marx Allee which I found a bit unnerving. It was built as a socialist showcase and it felt very Eastern European to me. It was a bit like being behind the iron curtain. I mean, not really, but there was something creepy about it. I seem to have been too hot and tired to take any photos so you’re on your own there.

We took the U-bahn back to the Nikolai Viertiel. Our guide book described it as mostly being filled with exhausted tourists. We certainly contributed our mite to this. It was re-constructed by the East Germans and is largely pastiche. I’m not an architecture expert and maybe if I hadn’t known this I would have thought it was charming but it’s hard to work up enthusiasm when you know most of it was re-constructed in the 1980s. 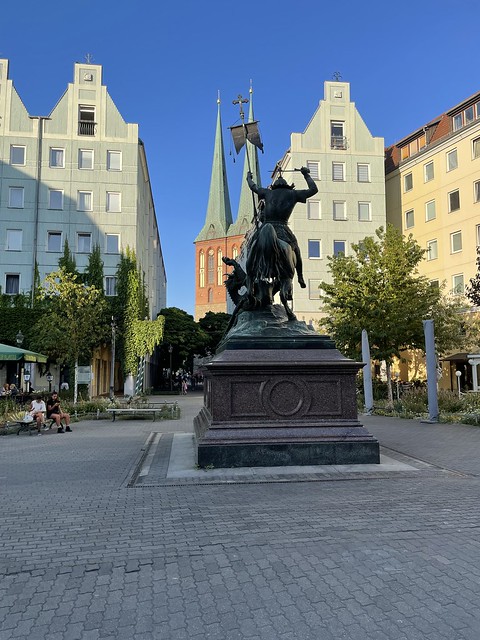 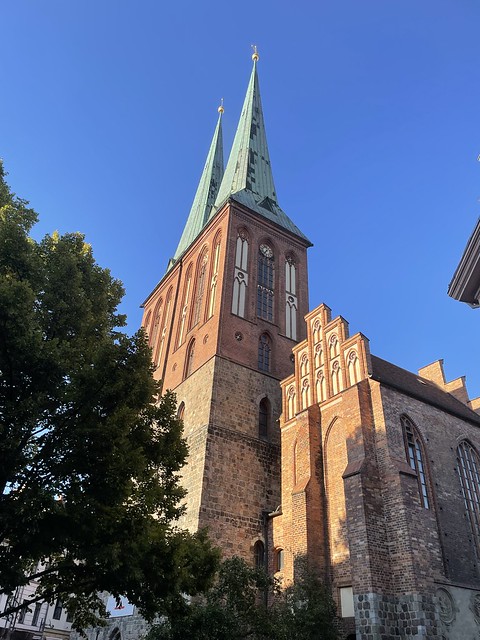 We decided it was time for dinner. We wandered from restaurant to restaurant in the restaurant filled Nikolai Viertel: “nichts frei”. Or on one occasion – “We only have one person in the kitchen, we can give you a table but you will have to wait an hour to eat.”

We had a footsore return to the S-bahn. As we crossed the desolate plain, Mr. Waffle said, “Let’s go to that van and get a Currywurst.” I was very much against, so against. But we did. And lads, it was the Currywurst of dreams. Possibly the best meal we had in Berlin. Was I hungry? Yeah, a bit. 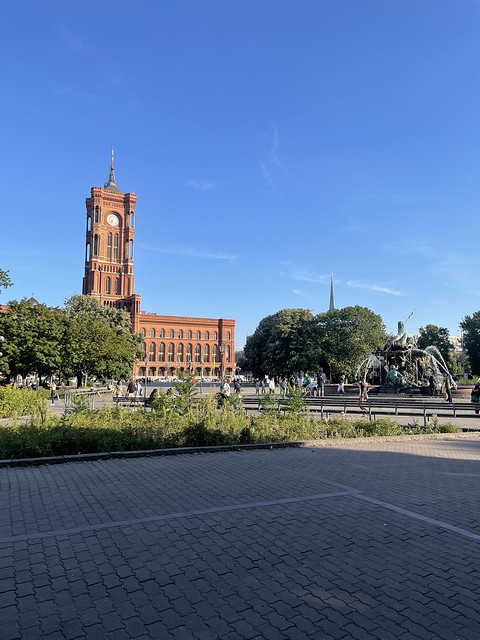 As we sat into the S-bahn, Mr. Waffle realised that we had forgotten the guidebook (a library book, remember) outside the Currywurst van. Like a saint, he went back to get it while the rest of us carried on home and I am pleased to report that it had suffered no injury.

Tune in for part 2 where I will try to keep excitement levels at an equivalent level.