I am not sure how much more bad news I can take so the results of the French election are welcome. Michael was glued to it and even watched the Le Pen/Macron debate in French. If only I had known that this was what it would take to make him voluntarily watch French TV.

I was messaging my friend in Paris during the election and asked her whether there was any chance she knew of some job that my child could do in Paris over the summer. Sadly, she did not. Her own daughter is back for the summer (she too is studying abroad) and my friend is hunting for a job for her. How glad you must be to have her back “pour l’été” I typed. “Pour l’éternité” Apple autocorrected which caused some mild confusion. I just thought you’d like to know how ineffective it is in all languages. I am driven demented with envy by my husband’s absolutely brilliant Android autocorrect.

The boys got Foil Arms and Hogg tickets for Christmas. They went with their father and their sister just before Easter and pronounced it satisfactory.

For Easter Sunday we had extended family round and it was lovely. Sadly my nephew was off in Germany with a friend (I mean not sadly for him but sadly for us as it would have been nice to have had all the cousins together) but otherwise we were all there. As the 11 of us sat down to lunch, herself said, “Have we any bubbles?” “Champagne? No,” I said. “Well even Prosecco or Moscato?” she asked. I would like to say that these are English notions but her paternal grandfather never met a celebration which he felt could not be made better by Prosecco so they are probably home grown notions. She did a great job in prepping the table. She’s quite arty; this did not come from me. 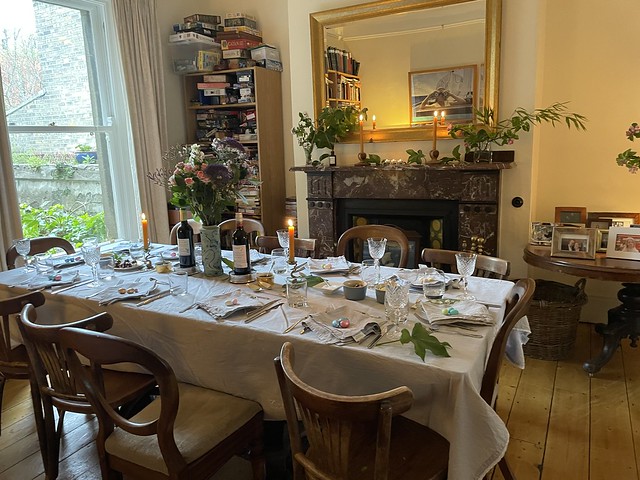 Dinner – cooked by Mr. Waffle – was reasonably successful although my four year old niece did not eat anything. “You’re not eating,” said Michael anxiously. “Michael, that you of all people should say that…” said her mother. Everyone laughed. Even Michael. He is like his grandmother who really enjoyed small children and was quite fascinated by them. Dinner was a triumph for the cat who after everyone had left the room, leapt up on the table, grabbed the remains of the leg of lamb and made off with it at speed.

There was a rather damp garden Easter egg hunt for my niece. The Easter eggs were small but many and I have never seen her more pleased than when she came in with her bucket of eggs. It was really great to have everyone together again.

The week after Easter, Mr. Waffle and I took ourselves for a walk to Portrane. We went there just as Covid was beginning and it was funny to be there now that it’s – apparently – all over. 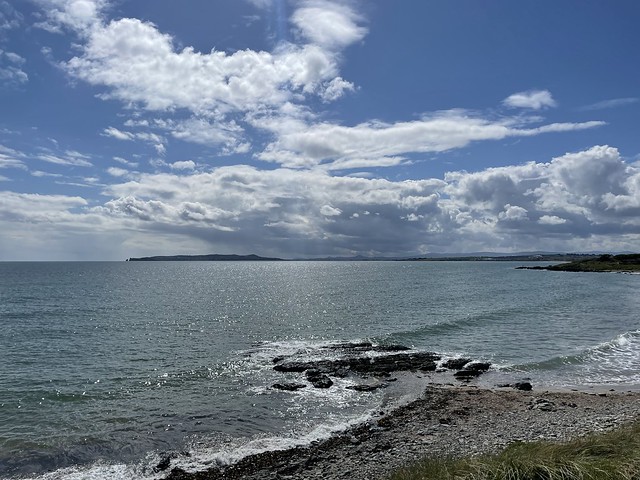 I went to see “The Secrets of Dumbledore”. Absolutely no one in the family could face going with me, so I went on my own. At the start, Dumbledore outlines how to outwit Grindelwald: we need last minute plans, overlapping plans, confusing plans. My heart sank a bit as JK Rowling is a woman who likes a convoluted plot without making it an essential part of the plot if you see what I mean. It was alright actually but I do think the whole thing may be beginning to run out of steam.

Over the holidays I took herself to the dentist and then we bought her a ball dress. It took a lot out of both of us (far more than the dental visit which was benign by comparison). Part of the problem was that with her sylph like figure most things looked good on her and she tried on a lot of things. We bought this dress in the end. She is pleased. I hope she continues to be as she will have to get a lot of wear out of it. 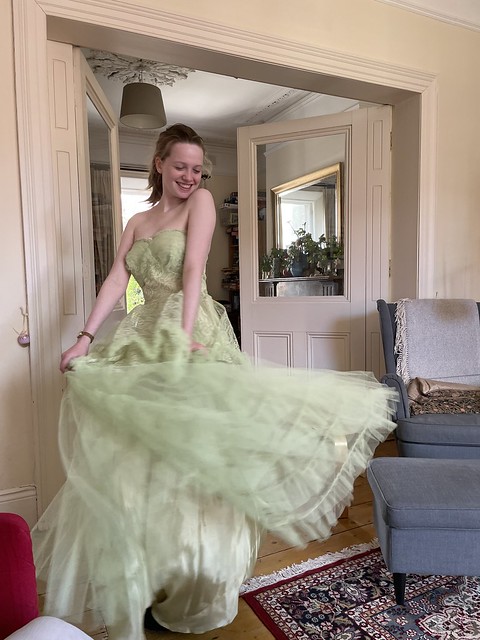 I have discovered that she has become a coffee drinker. I suppose as addictive habits you pick up in college go, it could be worse. It’s always really sad when she goes back to England. Usually she’s quite perky but she was glum on this occasion – which made it worse – as she had upcoming exams and she had to unpack all her stuff from storage. Both of these weighed pretty heavily on her mind. She has on campus accommodation which I thought was terrific but it comes with the not inconsiderable downside that she has to pack up all her stuff in three large boxes for every holiday. She says third years have it down pat and only bring a t-shirt to college. For English students their parents can drive them up and down and help them with the packing but she has to do it by herself. Last time she grabbed some unfortunate random young man to help with her boxes. “Where are your parents?” he asked. “They’re not here,” she said (with a touch of bitterness, I’d say). He thought that her parents were dead and was both mortified and sympathetic until the boxes were moved and the matter was cleared up. I am beginning to realise that from now on holidays will be bookended by happy arrivals and gloomy departures. Oh well.

I trust your own Easter was satisfactory.

During the week I got a blank postcard with my name and address on one side and a picture of Costa Rica on the back. I was quite baffled. Conversation with my sister revealed the following:

Not vintage content, I would concede, but there it is, this week’s postal mystery unravelled.

Separately, the census enumerator collected the census form. I had dutifully divided the time capsule bit at the back into 5 for us all to fill in a bit. It was on the hall table for herself to add her bit but, alas, she had not done so by the time the enumerator came. I wanted to take a photo of the time capsule as well for…um, not posterity, for me I suppose but it was not to be. I put in as much as I could about family history (I bitterly resent that empty fifth as I had much more to say but there you go); Mr. Waffle put in a bit about us and our cat; Michael hoped that there were people to read it; and Daniel put in a line from a song. I do hope we get to do it again next census.

The school is having a fund raising quiz night next week. We asked Daniel and Michael whether they would like to be part of a family team of 4. They instantly declined.

We asked two friends of ours who love quizzes and who have no children (so no babysitting or school events of their own to support) whether they would like to go. Yes but that night one of them has bridge and the other has poetry appreciation club (it’s our age).

I texted herself in the fleshpots of Spain where she is currently enjoying herself, to see whether she would come with a friend. Two days later I received a curt monosyllable in reply. No.

I suppose we’ll have to go on our own. We’re doomed for the popular culture round though to be fair, I’m not saying that the bridge and poetry appreciation crowd would be delivering there either.

I always think about my own mother on Mother’s Day. I still miss her. I suppose it would be strange if I didn’t.

My little family dutifully delivered for me despite the fact that it comes hot on the heels of my birthday which is always a big effort. I had a very nice breakfast, flowers and a card and, best of all, I didn’t have to get up at 6.30 to drop herself to the airport as her father kindly did so.

I trust you had a satisfactory day yourself, if you celebrate.

Today is Mr. Waffle’s birthday. A very happy birthday to him.

At the start of lock down, he got out his year book from his European masters some 30 years ago and started sending birthday wishes into the whatsapp group to cheer everyone up. Obviously, no one else has the year book (ladies and gentlemen, I give you my very organised husband) so he didn’t get birthday wishes on his own birthday. Last summer, I said this in passing to the Dutch Mama who was also in that class. Once we got over the initial awkwardness (there’s a whatsapp group?) and I asked Mr. Waffle to add her to the group, she promised faithfully that she would send a message when the big day arrived.

A couple of weeks ago she contacted me to double check the date of his birthday. This morning she messaged me that she got her cymbals out of the cupboard and was good to go, this was her moment. However, there were about 37 other messages to him on the group chat – his Scottish friend in Vienna having somehow discovered his birthday and messaged the group early in the morning. Mr. Waffle was pleased, the Dutch Mama put her cymbals back in the cupboard.

We exchanged some further texts. Her second born is applying to college and it’s taking a lot out of her mother. She, the child, has just finished her final school exam in English. Not so hard for her you might argue with her Irish mother. However, apparently she chose to study the Irish gothic – Sheridan Le Fanu, Bram Stoker, Maria Edgeworth’s “Castle Rackrent”. To be honest that sounds a challenging enough project for Irish school children. I am pretty impressed by the standard to which Dutch children are held in their foreign languages. Meanwhile here, we are still trying to find the train station in modern foreign languages, literature having been surgically excised from the curriculum some time between when my mother finished secondary school and I started. Alas.

Mr. Waffle seems pleased with his day so far. As I write he is out in the hammock – the weather having turned delightfully, and most unseasonably, fine – reading one of his birthday present books.

In other news, I reorganised the presses (or cupboards as they are known in other countries) and it was thrilling. Judge away. 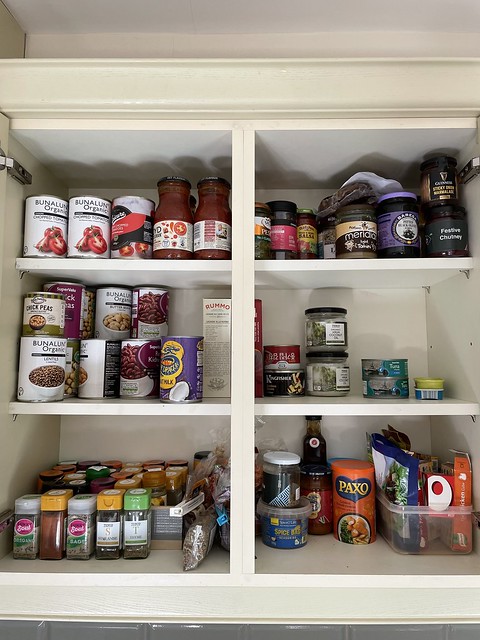 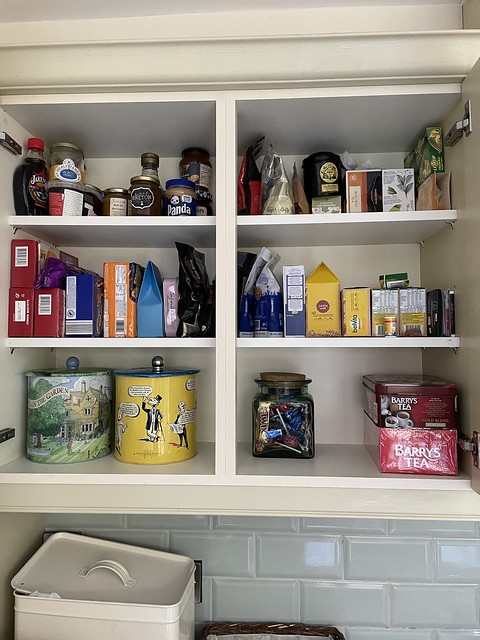 We may venture out later for a mild walk with the boys but having been inspired by the sunshine to go for an epic cycle yesterday, we may just stay home peacefully reading the paper and recovering from our exertions before waddling out for dinner this evening.

A four day weekend is a superb innovation. More like this please.