My rash is getting worse.  It now covers about 80% of my body and if Mr. Waffle wants to pat me comfortingly, he can only rub the top of my head. Up every 1-2 hours last night applying cold face cloths to my spotty person. Make with the sympathy please.  I’m off to see my fourth dermatologist shortly.

Bloody hell. That’s not good. Not good at all. Poor, poor waffley indeed. Best of luck with the derma – for Christ’s sake he better come up with something – set the princess on him if not.

Aah, thank you sympathetic ones. Things are mercifully getting better…

All in all a little tiring. On Thursday afternoon following three medical consultations, I decided to go with the majority and risk travelling.  I paid a fortune to get to Cork over Easter and I wasn’t going to let a rash stop me (no poor puns, please).

You will be delighted to hear that my rash has improved enormously, thus, obviously, vindicating my decision to travel. This morning I had the stitches taken out of my neck so I spent today loping around the office like Frankenstein’s monster. It is, of course, absolutely forbidden to cover up my scars with a scarf or a polo neck. Snort. Also, I can’t get my neck wet for 48 hours. Good lord. And all this to find out that they don’t know what it was but isn’t it good that it’s getting better of its own accord. Double snort.

So, epic journey to Cork. It took us the best part of a day to get there and the same length of time to get back.  My sister who came home from Chicago actually got back there faster than we got to Brussels. Of course she was actually flying for most of her trip whereas we spent the vast bulk of ours sampling the many delights which Dublin airport offers.
Actual time in Cork was very pleasant with babysitting services on high alert and significant food supplies laid in to meet our needs. On Easter Sunday, Mr. Waffle and I abandoned the Princess to her loving grandparents and went for a walk on the beach and a drink in Ballycotton. All very civilised. We also met the heart surgeon and her husband and their lovely month old baby whom they are managing with alarming efficiency. They have already been to play tennis three times while the infant watched from the sidelines. And they have been to the cinema. I am impressed beyond measure. Alas, they are moving to Burlington, Vermont in June so, I fear, we will see a lot less of them after that. Though, of course, it is probably as easy to get from Brussels to Burlington as it is to get from Brussels to Cork.
Comments
belgianwaffleon 01 April 2005 at 20:10

Am glad to hear that you had a typical trip to Ireland pog. Weather was surprisingly clement over Easter though.

Which is worse?  The fact that the workmen start at 7.00 outside our window giving residents an appreciation of what it’s like to live in a war zone or the fact that they appear to give up for the day at 9?

By the by, please see photo which proves, if proof were necessary, that Belgians regard parking restrictions as  pplying solely to others. 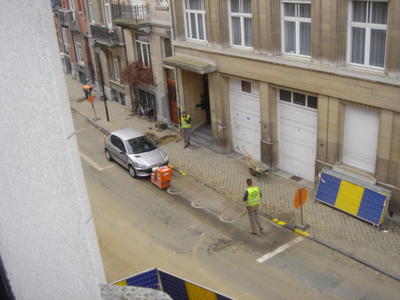 There is still no floss in the supermarket.

My parents boiler has been repaired.

And would you like some information on my mystery illness? The touching concern of some friends following my recent post makes me think I should put them out of their misery. There are a few things wrong with me. Starting with the most banal: I have a rotten cold. Let’s move on to more exciting things. About two weeks ago something started biting me. Could we have fleas?  But we have no pets and are reasonably clean and nothing was biting my loving spouse.  An extensive examination of the sheets revealed nothing.   They were changed and the mattress hoovered nevertheless. The biting continued.  My husband started to worry about me as I crept into the bedroom, pulled up the duvet and pounced on what always turned out to be an innocent piece of fluff (where is all this fluff coming from anyway?).

So it went on.  And the bites got worse and worse.  And, finally, last week, I consulted my tame medical advisor who, ever one to provide comfort, said that the spot distribution sounded like smallpox, but it was unlikely to be that.  Since the tame medical advisor lives in Cork, he suggested it might be worth seeing someone locally who could actually inspect the damage. By this stage, my legs were red, raw, weeping
and swollen up in a most alarming manner and the rest of me was pretty itchy.  Walking was painful and difficult.  So on Monday, I went to the dermatologist who, conveniently, is a couple of doors down from my house.  The result was most gratifying.  She called in a colleague.  They both oohed and aahed and tut tutted that I hadnt been to see them earlier.I
held my breath for a photo in the Belgian version of The Lancet. They’re not sure what it is and yesterday they sent me off to another dermatologist who isn’t sure what it is
either.  And I have had lots of blood tests and a biopsy which has left two stitches and a glamourous bandage on my neck.

Because of further complications which will be revealed in due course, they haven’t really been able to prescribe anything except rest but I’m going back at lunch time to be hovered over by two dermatologists and two other doctors will be phoning in to give their tuppence hapenny worth.  More details to follow in due course. By the by, I’d like you to know, they say its definitely not flea bites.

Poor Waffly – sounds nasty.
I hope they get to the bottom of it and fix you soon.

Poor you, waffly …
(FT hasn’t been bringing any little friends with him, has he? You know how scabrous his hands always are ….).

Hey, I resemble that remark!

Possibly it is scurvy? I have no idea what the symptoms for scurvy are, but have always thought it sounded like an excellent illness to have.

Hmm…yes, it would have been easy to make flea jokes, but that acually sounds quite annoying and a wee bit serious. Anything that requires stitches can’t be good. Poor you. Feel better soon.One other thing, is it just me or does that peugeot look quite small compared to the two lads near it? Do they make mini-peugeots?

Oh Heather, a sweetie, you are kind. Yes, JD, quite possibly, the experts are baffled. I am so proud. Thank you Norah. Thank you Pog, and yes, I have my suspicions about FT also, though I note he denies all. Thank you Sarah, you will be bored by details of my progress. OOOH Beth, maybe it is, cool. Locotes, feel much improved hearing from you – how nice that you are about. Will you come back full time when you’ve finished your degree?

tsk, you should know I had my degree ages ago, your memory of me obviously faded quite quickly! 😉
This is my MSc I’ll have you know – the path to oodles of cash! Well, I can dream…
As for the full time, only time will tell – I’m trying to put a stint in now, but of course that could also be because I’m avoiding work. Maybe. Possibly.

Yes I know you already had one and were getting a second for the hell of it…do keep avoiding work.-

Oh I will, don’t worry. All part of the studenty job description. Glad you had a nice time in Ballycotton by the way – though surely Rocky Bay can’t be beat?