This week the children have been off school all week. The childminder had them in the morning and Mr. Waffle in the afternoon except on Monday when he had them all day. The week was full of incident. On Saturday, it was the Princess’s birthday as previously discussed. On Sunday night the boys stayed over at their grandparents and Mr. Waffle and their sister collected them on Monday.

On Tuesday, the Princess was scheduled to go to her friend’s house for a birthday sleepover but as ill luck would have it, that was also the night that she and I were scheduled to go to “Potted Potter“, a birthday treat for her. Unfortunately, this was filed in a completely different part of my brain than the part that, at least twice, had told her friend’s mother that we had no plans and that Tuesday would be absolutely fine. Cue grovelling phone call and agreement that she could be dropped at 9 rather than 5. Happily she really enjoyed the Potted Potter show. It wasn’t for me but I did enjoy the lads finding out a bit about the cultural difference between Ireland and England. Early on they said, “You’re telling me that Dumbledore is the most famous wizard ever, and he’s a teacher?” This got some cautious laughter but later on they had another lash at teachers and the audience started to boo. They were quite surprised by this and said aloud that they should note that this one doesn’t travel across the water. It says something, I think, about the status of the teaching profession in both jurisdictions.

On Wednesday afternoon, Mr. Waffle’s sister in London came for a visit and then on Wednesday night we went out for dinner with her and Mr. Waffle’s extended family which was lovely but late.

Thursday night saw me haring home from work. The Princess and I headed off to Holy Thursday rehearsal at 7 followed by mass at 8. The Princess and another girl sang the Alleluia from the altar and they were lovely (one very fair and one very dark and sounding angelic) and all passed off peacefully.

On Good Friday, the weather was beautiful, we went to visit the site of the Battle of the Boyne where we had a picnic and got to use our family heritage card and then, daringly, pressed on north to Carlingford where we had a delightful walk. On our descent we planned to go to a pub for a cup of tea/packet of crisps but we had reckoned without the licensing laws. We managed without (think of the saving) and travelled home very pleased with our day’s adventure. 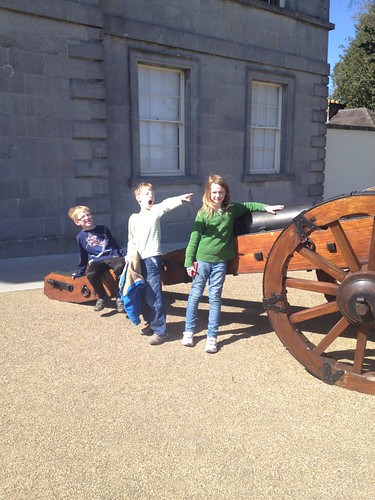 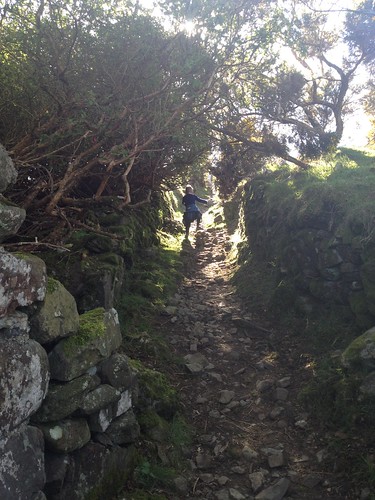 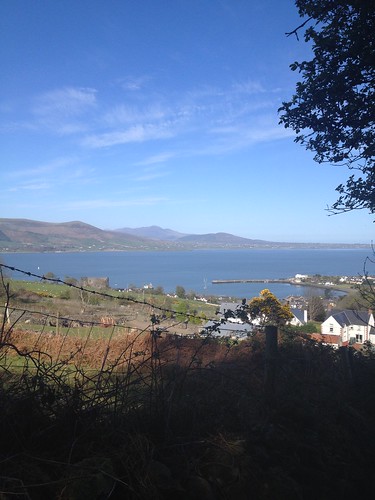 On Saturday, buoyed up by the success of Friday, we went to see the re-enactment of the Battle of Clontarf. Notable as the only battle the native Irish won in a thousand years and a healthy corrective to the Battle of the Boyne visit on Friday.

The weather was beautiful. I was, nonetheless, slightly apprehensive as organised fun can be trying. Shortly after we arrived, among the stalls, the children spotted Dave’s Pizza which is very popular with them and in the past has always delivered the goods very rapidly. This was not the case yesterday. We waited a good 40 minutes to get our pizza and in the process missed the wretched battle re-enactment. This was at one. It was scheduled to run again at four but I was quietly confident that we would be gone by then.

We went to the playground (yes, Dot, it was us, what a pity we didn’t meet), went to see the Viking crafts (wood turning and the like, v. impressive although of zero interest to the children), confirmed that the Viking longship which was in front of us was indeed the one which we had seen going down the M1 the previous day, and played some celtic games. The last was by far the most successful. So successful, in fact, that to my horror, I discovered that it was 3.40 and it would really be a shame to leave before the four o’clock enactment.

We joined the crowd around the arena. I prodded the children to the front and people very kindly let them through while I resigned myself to an hour looking at the backs of people’s heads. There was a woman having a picnic with a number of children just beside the ring and the crowd surged around her but stayed off her mat and picnic basket. She resolutely didn’t move. She said goodbye to the children who went off with another adult and sat in her square metre of rug which acted like an invisible force field deflecting the feet and the irate glances of those surrounding her. She stood up but did not fold her rug. I ran into my former boss of bosses and her husband and, showing the nerve which made her great, she blithely stepped across the forcefield rug to a better view. No one else had the nerve and, for the duration, picnic woman’s imaginary cordon sanitaire held despite the growing (silent and ineffectual) irritation of the crowd. I would be more annoyed except that the children had great views and Daniel loved it and Michael quite enjoyed it. Herself, from her prime seat at the ringside appears to have read her Terry Pratchett almost throughout, looking up for the odd bloodthirsty charge. This must have spread some irritation also.

Apparently this was the largest battle re-enactment ever in Ireland with people coming from all sorts of places to take part. An organisational nightmare, I’m sure. Overheard conversation:

Man in viking costume: We didn’t know what we were going to being doing until Thursday night, it was very poorly organised.
Elderly lady: Well, it was the first time, maybe it will be better next time.
Him: Well that’s a 1,000 years.
Her: I won’t be around to see that, but maybe you will.
Him: I think that’s extremely unlikely.

I was exhausted by my day out in the sun and headachy and, only realised, to my horror, that we were scheduled to go to the Easter vigil mass at 9. We went. We were all a bit tired. When we arrived, the church – gothic revival – was all in darkness and then each member of the congregation lit a candle from the Paschal candle. It was really very beautiful and atmospheric. The music was lovely. Nevertheless, at 9.45, we were still doing readings and responsorial chants and hadn’t actually started mass. Mr. Waffle and the boys bailed. Our parish priest was in his element. A large man, he does not look good in his civvies but in his special Easter gear he looked like he was in the role he was born to fill and he certainly wasn’t going to cut it short in any way whatsoever. There were 9 priests on the altar and the air was thick with incense. At 11.00 just as mass was about to end (yes, two hours after we arrived), the priest said, can you sit for a few moments as I have a few announcements to make. I thought that I would cry. It was nearly midnight by the time we got home. Next year, we are going to the morning mass.

On the plus side, we had my parents-in-law to lunch and attendance at mass last night meant that we could sleep out and get lunch for them. Herself organised an egg treasure hunt for her brothers and I arrived downstairs to oversee about 10.30. All very civilised. 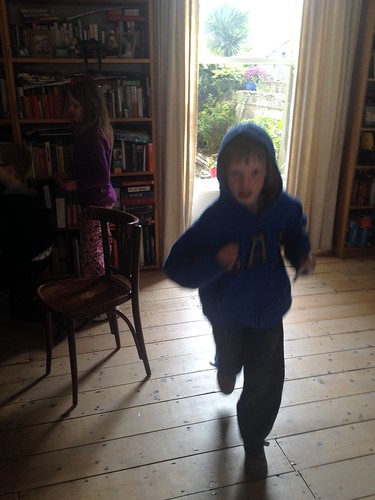 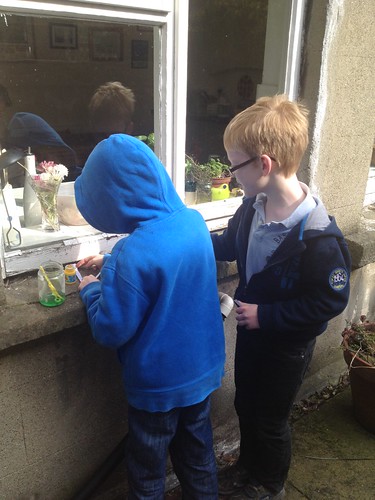 We have done nothing all afternoon and, as I write, the children and Mr. Waffle are playing cards in front of the fire next door (today is not unseasonably warm). All very pleasant.

A very happy Easter to you all.

There is always a slightly impromptu element to the prayers of the faithful at our local mass on Sunday. They are read out with greater or lesser degrees of aplomb and clarity by the children to hand. Without doubt, the most difficult is the deaths. The child says, “We pray for those who have died.” He or she then waits for the priest to list the names of the dead. When the priest has finished the list the child finishes off, “May they rest in peace and may perpetual light shine upon them.” The whole thing is fraught with difficulty. The child forgets to stop and reads right through; the priest doesn’t come in quickly enough; the priest leaves too long a pause and the child starts on the rest in peace over the names of the last deceased (whose relatives are likely to be in the congregation); or some ghastly combination of all of these. I am always rather tense when my children get this.

Last Sunday we were spared. Some other mite began “We pray for those who have died” but then the prayer ran on “from war, pestilence and famine”. It was clear to the congregation that this was not in fact the prayer for local dead; say what you like about the area, deaths from war, pestilence and famine are thin on the ground. The child however had heard the magical opening words and not particularly noticed or understood the follow-on. She paused and looked meaningfully at the priest. He looked meaningfully back at her. They stood off for quite a bit until the priest took matters into his own hands and said “Lord hear us.”

It’s all drama around here of a Sunday.

Mr. Waffle normally takes on the slightly thankless task of standing at the edge of a muddy field somewhere in the greater Dublin area early on a Saturday morning watching Dan playing football or hurling.

I went for the first time in a while recently and I must say that the team have really improved and it was quite exciting to watch. Dan is very keen and throws himself into the action. He is very persistent and never gives up and he really cares about the game. This can be a bit of a problem when his team loses (or as a father on the sideline put it to me glumly once “the inevitability of another crushing defeat” – this was an earlier season, they are, mercifully, doing much better this year.)

I was chatting to one of the other parents on the sidelines briefly but it transpired that he was the deputy-coach (oh yes, several coaches) and couldn’t really talk as he had to shout at the boys. At the end of the match when I collected Dan, he said to me, “Are you Daniel’s mother?” OK, I really don’t go very often. When I confirmed that I was, the coach said to me, “He has the heart of a lion!” And he wasn’t being sarcastic or funny, I knew he really meant it, and I know it’s true. Daniel may not be the best player (he’s certainly not the worst either) but he plays his heart out. He cares more and tries harder than anyone else on the pitch and it was lovely to see it recognised.

The scene: An epic table football battle between Michael and me.

Me: It’s not over until the Fat Lady sings and you don’t hear me singing, do you?
Michael: You’re not fat, Mummy.
Me: How kind of you to say so, Michael.
Him: You’re just a bit pudgy.

Daniel: Daddy said something very mean to me.
Me: What was that, sweetheart?
Him: He said you have to wait your whole lifetime again before you can play Halo.

Daniel: How old do I need to be to vote?
Me: 18 but they’re talking about lowering it to 16.
Daniel: Now I have two things to look forward to when I’m 16; I’ll be able to play Halo and I’ll be able to vote.