Long-term, devoted readers (a select group, mostly related to me) may remember that about this time last year, I went to Rye with a group of friends I used to work with in Brussels.

On the way up, we stopped in Hillsborough, Co. Down which is a pretty little place with, for me, a very English feel to it. We failed to telephone for advice and in consequence had a mediocre enough lunch; I have discovered that for food in Northern Ireland you have to know where you are going. We did not know where we were going. I have also discovered that tea is served very strong (expression “you could trot a mouse across that” almost certainly originated here). I extracted five tea bags from a pot for two. We also discovered that parking rules are rigourously enforced and acquired a £90 fine (£45, if we pay it in time). 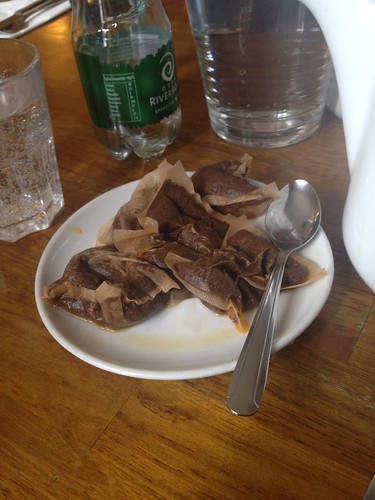 Notwithstanding preliminary difficulties in Hillsborough, I had the most amazing weekend. The scales have dropped from my eyes. I cannot tell you how beautiful Co. Antrim is and it is empty. It was the May bank holiday weekend (North and South) and we had the place largely to ourselves. It’s only about three hours drive from Dublin and it is a spectacular spot where you feel like you are at the edge of the world. 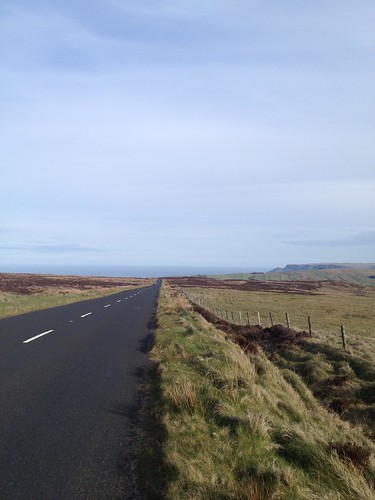 Our native guide acquired for us a really lovely holiday cottage with the sea and the Ulster way at the end of the front garden. 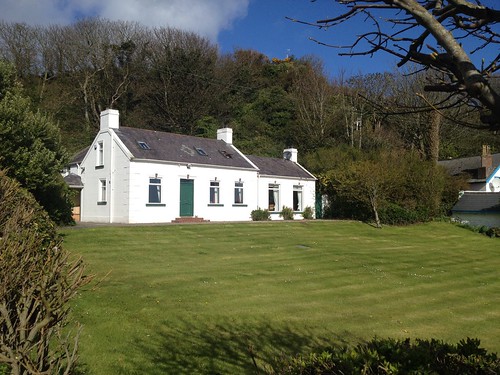 As well as beautiful views over White Park Bay. 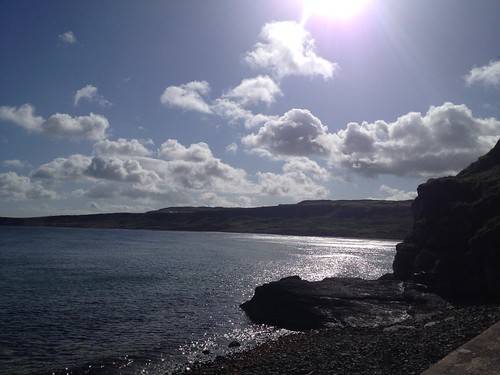 Apparently the area near the beach boasts the remains of the Hedge School where Lord Castlereagh got his start in life but I didn’t see it, alas.

We were staying for three nights and three of our number cooked, having imported a range of food from foreign parts. Always have someone who originally trained as a chef among your party. I doubt whether anyone on the Antrim coast ate better than we did. And it was really nice to stay in and talk as we don’t all meet very often and there was lots of news; property buying is rife.

The forecast was for rain and our hostess’s parents who had lent a car, a map, two coolbags and their prayers to our endeavours were filled with fear but on Saturday there was no rain and we walked from the house to the Giant’s Causeway. It was about two hours and it was one of the nicest walks I have ever done and a highlight of the weekend for me. 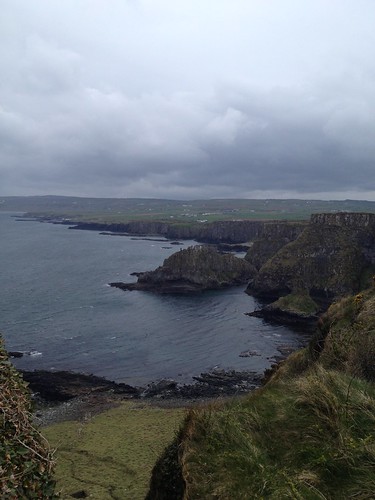 There were plenty of the weird rock formations to see on the way. 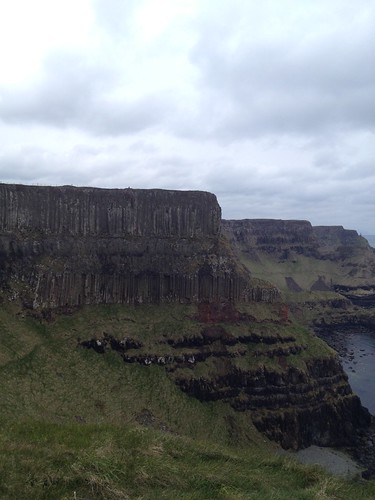 The Giant’s Causeway itself was, as advertised. It was also unusually tourist rich for this stretch of coastline and I enjoyed a warming smug glow as I thought of our delightful walk and superior views. 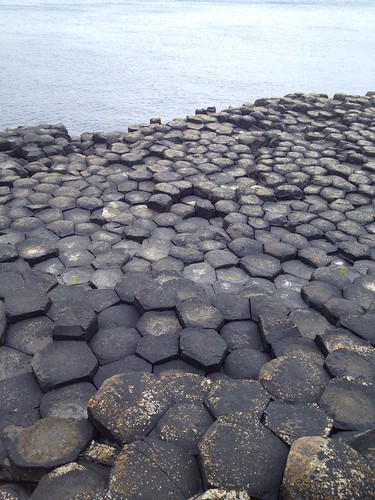 Samuel Johnson was sorely mistaken. Before looking this up, I hadn’t realised that a jibe at Dublin preceded his famous remark on the Giant’s Causeway. A “worse capital” indeed.

After our walk we took ourselves to the pub in Bushmills where we had scones and tea in front of a, very welcome, roaring fire. Ah, Ireland in May.

On Sunday morning, I felt that I ought to sample some of the religion with which Northern Ireland is so particularly generously endowed. There was a small Protestant church nearby and three of us headed off: myself, the Protestant and the saintliest of our number (a godless atheist from England). Although I have been to Protestant weddings before, I haven’t been to a Protestant service and I was amazed how similar it was to mass: the shape of the service is the same; the Creed is the same; the Gloria is the same; the sign of peace is the same (discovered afterwards that my Protestant friend’s father and my own father are identical in their loathing of this religious development – hands across the barricades and all that); the Our Father is, of course, the same.

The C of I hymn book introduction reinforced all my stereotyped beliefs about the Church of Ireland. It was put together by a committee who excluded some verses of hymns on the grounds that they might be offensive to modern ears; where it didn’t affect the the hymn too badly, they substituted humankind for mankind; they included hymns in Irish (for inclusivity – I was very surprised how many of these I didn’t know at all) and English translations (also for inclusivity); and they agonised over the updating of thy, thee and ye (which last they pointed out is still in use in some parts of Ireland – including my house, as it happens). You have to love the C of I. It was a family mass (or service as my C of I friend pointed out in anguished tones) so we had lots of children floating around and it was all rather nice. Although the devil has the best tunes, he resolutely chose not to deploy them on this occasion. We all warbled together the vile “Bind us together Lord” which has clearly crossed the religious divide. I was very amused by my English friend’s unavailing efforts to follow the service in the missal; old hands like myself and my Northern Irish friend are used to the flicking back and forth the almost tissue thin pages in non numerical order but she became a bit lost which is most unusual for someone who is normally the epitome of efficiency.

I felt slightly guilty afterwards when I discovered that the Catholic church was only down the road (usual neo-gothic offering) and slightly astonished to see two more churches (chapels?) in what looked like pre-fabs – possibly Methodists or Baptists or some of the more exciting evangelical sects to which the North is home. There is no shortage of variety of religious worship in even the smallest town, it appears. I noted that, as is universally the case in Ireland, by far the most appealing church, architecturally, was the C of I one and it also had the best setting looking out over the sea at the edge of the cliffs, surrounded by whitewashed houses. 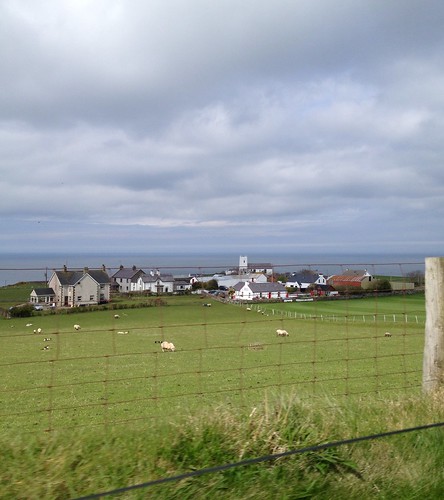 After this we went down to the harbour at Ballintoy which is a setting for Game of Thrones, if that is your thing – not mine though perfectly pretty little harbour. 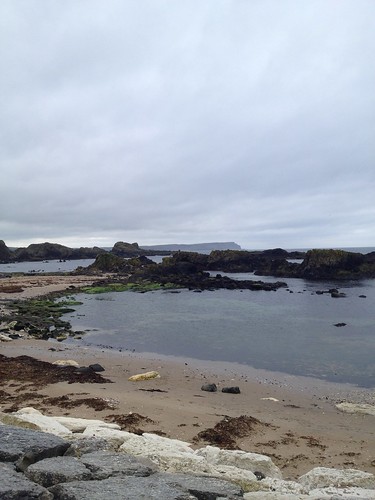 The real excitement was, undoubtedly, spotting the “Pear Picking Porky” which my other friend from the North had been pining for. It is a pear flavoured ice lolly only available in Northern Ireland. The porky bit is a red herring*; it contains no bacon. It may not contain any pear either. 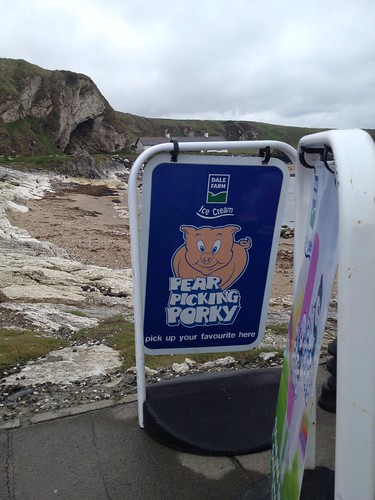 After lunch we went to the Carrick-a-Rede rope bridge which is quite exciting and definitely sways. 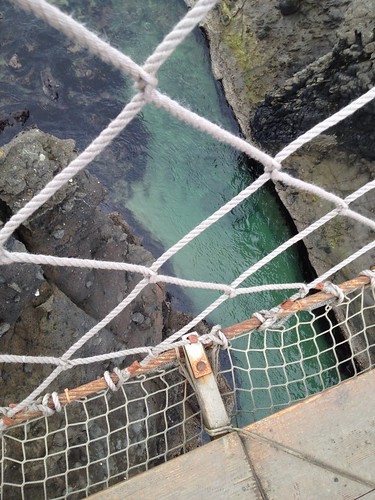 One of my Northern friends found it a bit unnerving and had to be walked across by the, rather forceful, guide. Who could blame her? 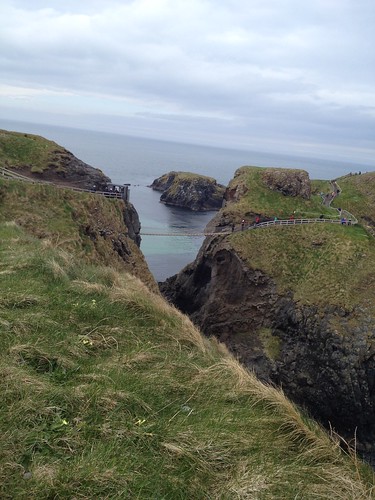 Apparently, it’s much sturdier than it used to be. The mind boggles.

We also saw Dunluce castle but we arrived ten minutes after last entry and, displaying the unyielding nature which can sometimes characterise our Northern brethern, the man on the gate refused to let us in. 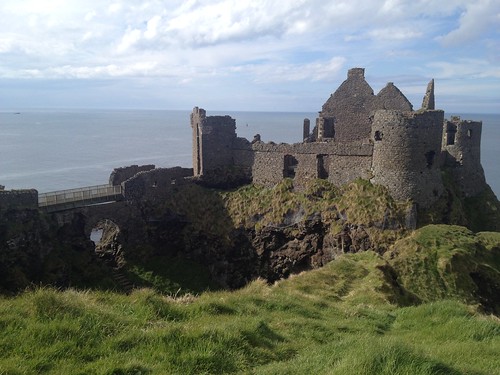 Never mind, I will see it when I come back next time, because I will certainly be back.

On Monday, I got the bus back to Dublin from Belfast. As we drove through the little towns, we were able to appreciate the Northern fondness for murals. Take Cushendall for example: 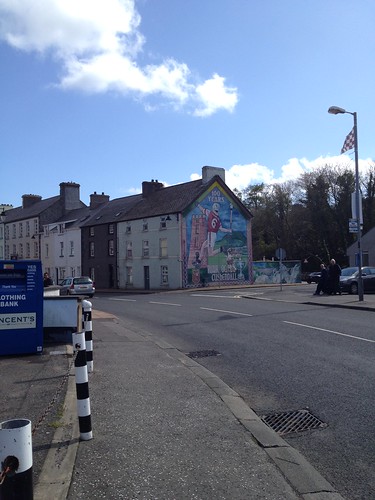 As my Northern friend dropped me to the bus, she pointed out a couple of Republican landmarks: the Divis flats were visible in the distance, Milltown cemetery and the Falls Road – were “just down there”. I mentioned that Daniel was in Belfast for the day playing a GAA football blitz and she looked at me in utter horror. “Don’t worry,” I said, “I’m sure they’re off somewhere in a lovely, leafy suburb.”

When I got home, I asked Daniel and Mr. Waffle where the football blitz had been. The Falls Road, it transpired. “Were the children rough?” I asked in mild trepidation. “Some were and some weren’t,” he said. When you’ve played football in Dublin, nothing can faze you. They got to the semis too.

*Did you see what I did there?