This time of year is a complete nightmare for the culturally aware. When we come back from holidays in August, there is Heritage Week, then in early September there is the Fringe Theatre Festival, then Culture Night, then the Dublin Theatre Festival, (History Festival is a new thing which, in my view unwisely, has pitched itself between mid-September and October) then Open House, Dublin. We always get something out of going to these kinds of events but I wish that they were not all so hot on each other’s heels and coinciding with a time of year when we are already up to our oxters with back to school and everything else. 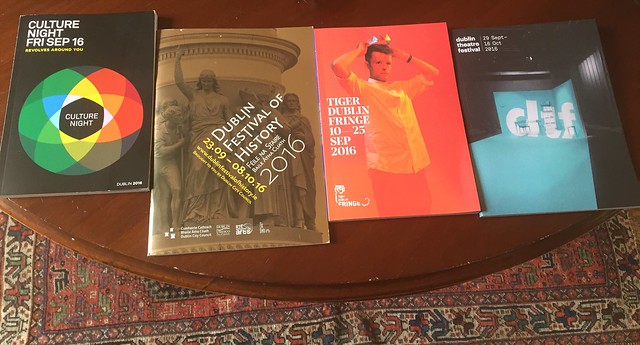 Happily, Heritage Week has now passed. Due to my efforts (on holidays, in France: culture never sleeps) we were booked in to see an event in the National History Museum about a traveller across Africa and had even lined up some friends of the children to attend also. As it happened, I had to go to Cork that weekend and Mr. Waffle was home with the children. I sent him a series of messages reminding him about it. Through sheer force of will and from a distance of 250kms, I persuaded and cajoled four very reluctant people into going to that session. When we were on holidays, one day, herself said, “What do you want to do Mum; we might as well know as we usually end up doing that.” She may have meant it as an insult but I definitely took it as a compliment.

Anyway, when I asked for an update after the heritage week event, this is the message I got: “The museum thing was actually a success.” The “actually” was perhaps harsh. Apparently it was fascinating and I was sorry to miss it myself. So, on the back of that slender success, I am about to turn my attention to theatre festival booking. Wish me luck.