After a thrilling trip to Leclerc (this is not even slightly sarcastic, I do love a French supermarket) we took ourselves off to visit our first castle of the holidays. It was a place called Trévarez and it was a really odd spot. The owner spent a fortune building it and it had all possible mod cons including en suite bathrooms which must have been uncommon enough in the 1890s. I thought it was pretty ugly and overblown from the outside but I presume the owner liked it so it was unfortunate that he died very shortly after it was completed. It fell into disrepair but has now moved into public ownership and is being restored. It’s much more attractive inside than out and enjoys lovely sweeping views. 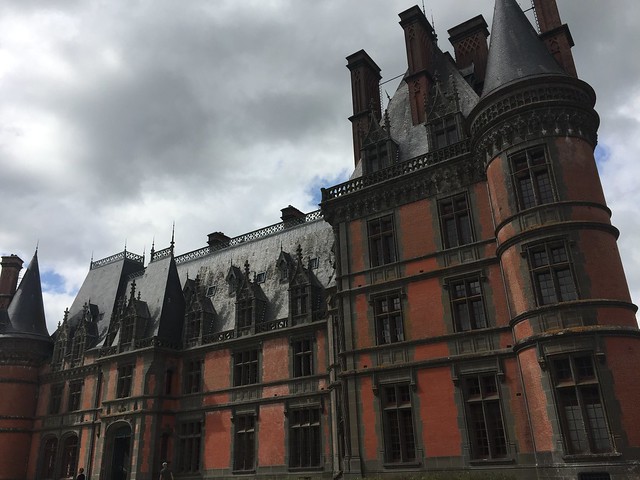 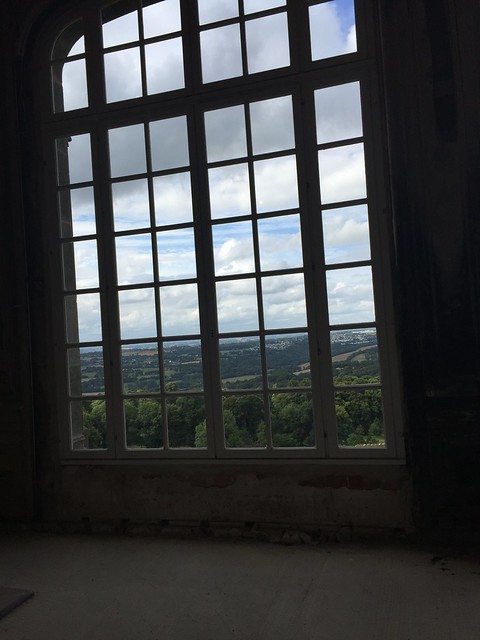 There was an opportunity to insert yourself into a picture of an imagined Trévarez in its heyday using an iPad which we all rather enjoyed: 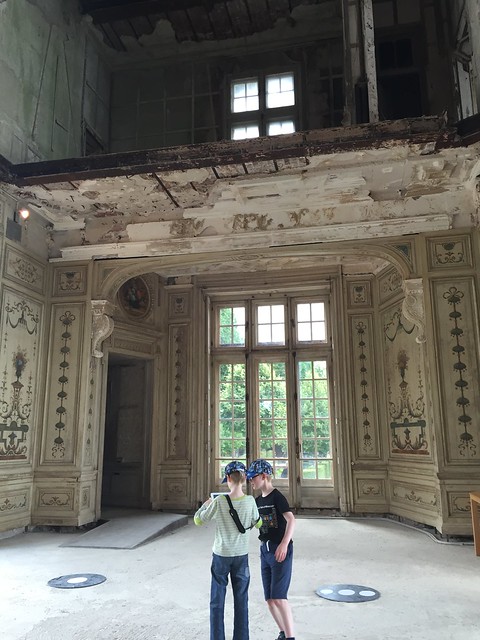 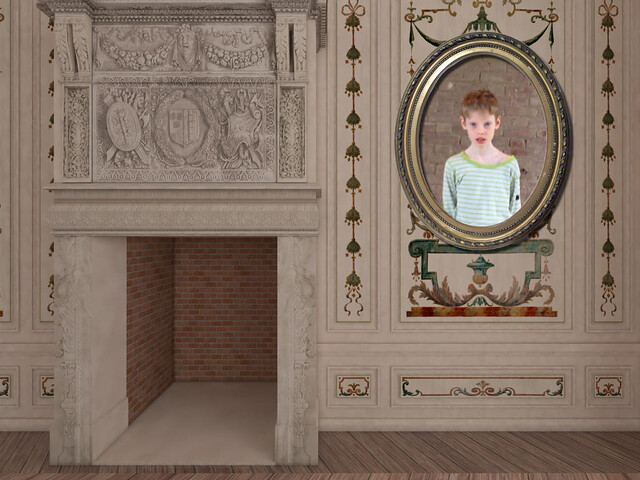 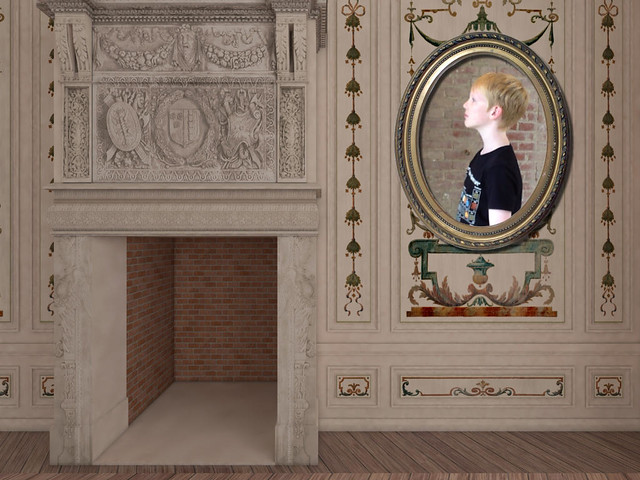 We took the children zip wiring again in the morning in the suburbs of Quimper. I crept off to a local antiques shop which was full of lovely, reasonably priced items. Regrettably, they were all quite large; although I did spend some time wondering whether I could fit a marble topped bedside table beside Michael in the boot, wiser counsels prevailed.

In the afternoon, I took the children to the art gallery because I felt that some culture was appropriate. They were resigned rather than mutinous. We did not, in fact, see the Mona Lisa, despite appearances to the contrary. 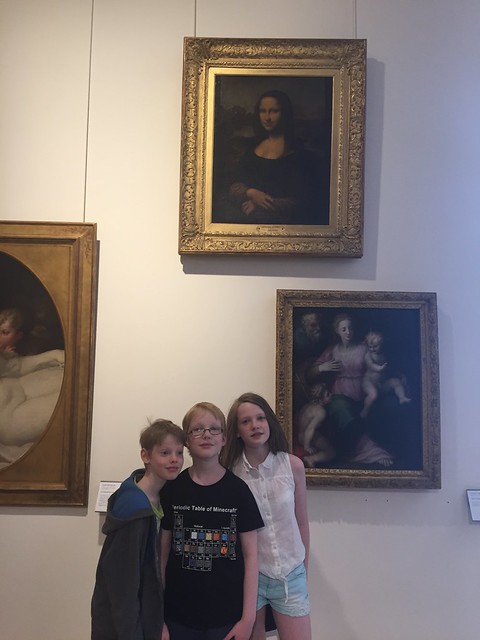 We had a wander around the town, to our great excitement, saw our water jug (shaped like a novelty duck and purchased in Normandy last year) in a bric a brac shop, had some pancakes and, after some difficulty, rescuing our car from a car park which took neither cards nor notes, headed home to recover from our exertions. 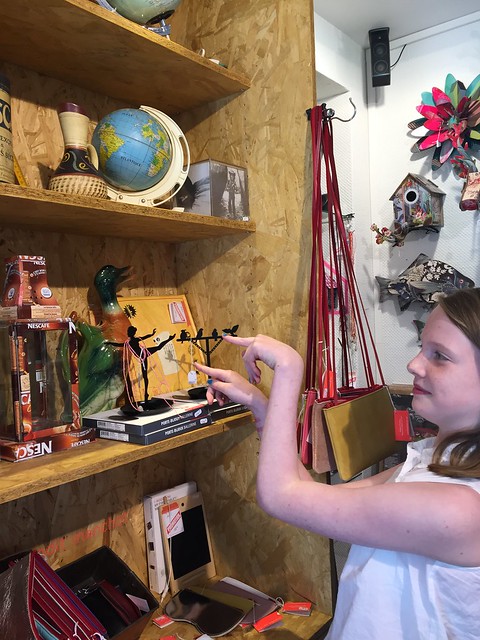 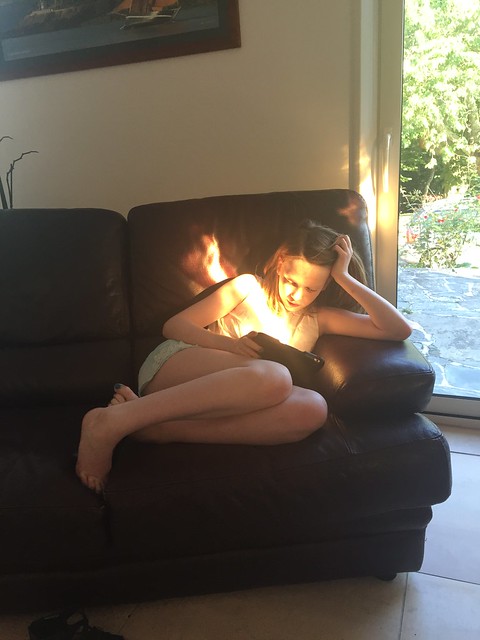 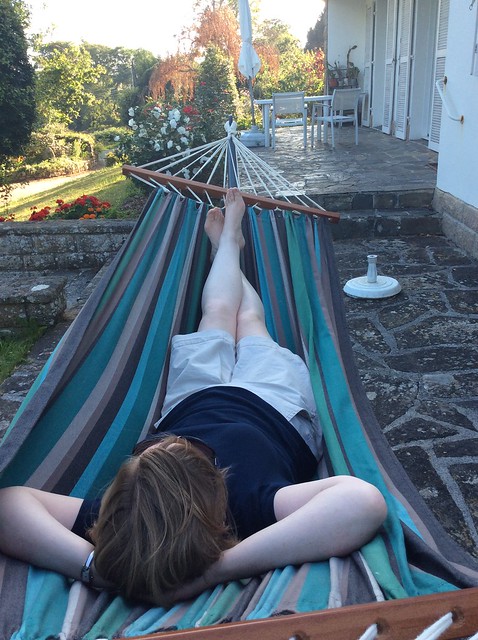 I have failed to mention to you that the song “Les Lacs du Connemara” had become our theme song for this holiday. I am not quite sure why. Possibly because herself had spent time in Paris with my friend who as a teenager had had an Irish exchange. This girl had been homesick and, in an effort to cheer her up, the family had played “Les Lacs du Connemara”. This was entirely unsuccessful as this famous French song is unknown in Ireland. Frankly, it appears that Michel Sardou was pretty ignorant about Ireland also and the lyrics are stage-Irish shameful. To start with, why would Maureen, a girl allegedly from Connemara get married in Limerick, secondly why would the wedding invitees come from Co. Galway to Co. Connemara when Connemara is in Co. Galway and there is no Co. Connemara. I could go on for quite a bit. Anyway, we all know it now. I can’t help feeling that the children could make a fortune performing for French people of a certain age.

So on Wednesday, Daniel and I went out for a spin on the bikes in the house and had a look at the municipal goats. The city of Quimper has a flood plain. The vegetation is kept at bay by ecologically sound municipal goats. No I am not making this up; is it any wonder I love the French?

In the afternoon, we went to an aquarium with a birds of prey show on the side. This was inspired by our hugely successful trip to Clare where we saw an amazing show with birds of prey. The aquarium was ok but the birds of prey was not a success. It was too hot and too crowded. As we were nearby, we went to the Pointe du Raz afterwards; famous for being pretty and westerly both of which it delivered on, to be fair. Only mild enthusiasm from the troops who had been there before and were underwhelmed by both its prettiness and its westerliness. 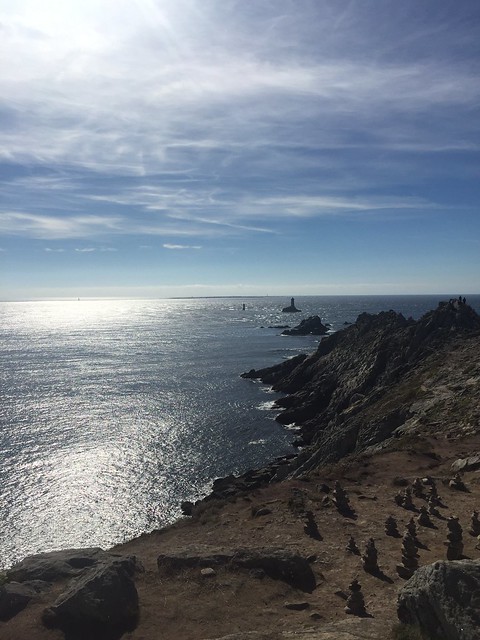 Building on our daring previous success, Mr. Waffle and I left the children at home again and went in to the Musée Départmentale unaccompanied. Over the holiday, Mr. Waffle had been reading this book which he found in the house -“Le Cheval D’Orgueil“; it’s “Peig” for Bretons. Originally published in Breton it is the autobiography of Pierre-Jakez Hélias who had a traditional Breton upbringing. Mr. Waffle had been giving me edited highlights which, I suspect, is how it is best enjoyed. Anyhow, one of the items in the museum was Hélias’s traditional Breton garb and it was surprisingly moving to see it, given how much I knew about him at that point. 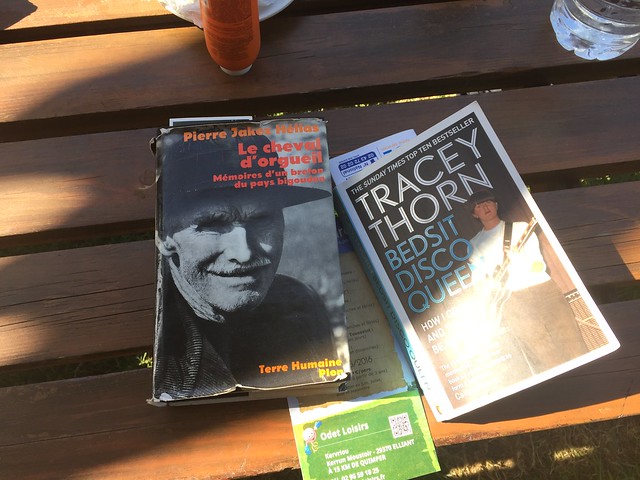 I might note that our time torturing our children with information about basic Breton and its relation to Irish was not wasted as, only yesterday, herself ran into the principal in the school corridors and he asked her where she had been on holidays and when she said Brittany and he asked whether she knew any Breton and about its relationship to Irish she was, despite herself, ready.

That afternoon we went to what I confidently described to the children as a water park. It turned out to be a park filled with trampolines, pedalo opportunities and slides but not, in fact, a water park. This led to some mild disappointment as it was quite warm and water would have been welcome.

That night we again left our children in the hands of the rapacious babysitter and went for dinner in Quimper. Dinner was truly delicious. Our hostess was delighted when she discovered we were Irish having lived for many years in Barna. Her uncle was a Breton nationalist (interesting bunch the Breton nationalists) who moved to Ireland and married an Irish woman and she told us a bit about him. Interesting man. We returned home to find the children still alive but they indicated that the babysitter had engaged less with them than on the previous occasion. Clearly, she didn’t feel the same need to entertain them for the lower rate which, frankly, was fine.

I went in to Quimper alone to look for a faience sculpture. I did not succeed. These Breton heads are pricy. I thought it might be a nice souvenir as I think we won’t be gracing Brittany with our presence again for a while as we have been there five times in the last six years and I am beginning to think that there isn’t a monument in Finistère that we haven’t seen several times.

That afternoon we went for a mild walk in the woods. 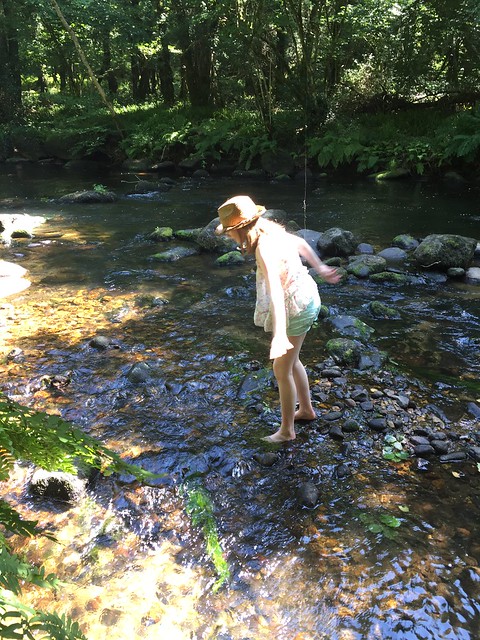 That evening we had dinner out en famille and a last trip to the ever-popular fairground. I went into the fun house which I deeply regretted. I emerged feeling ill and grubby. The children loved it though. 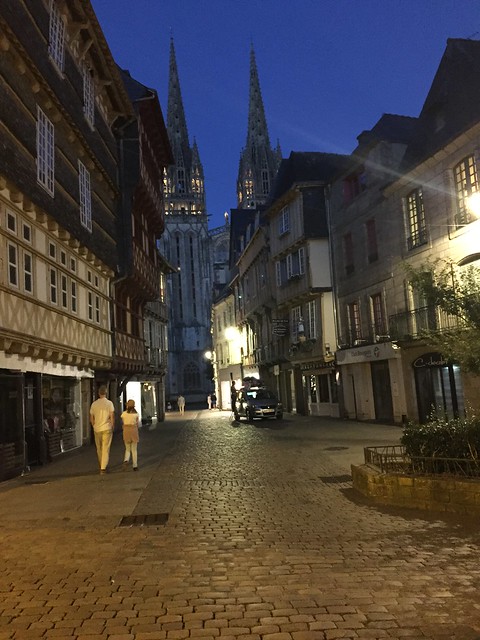 We had a last trip to the beach and then afterwards we went to the Phare d’Eckmühl. This was one of those outings where I was glad to have overcome significant opposition. The inside of the lighthouse is beautiful as are the views from the top. Also, who goes to Brittany without visiting at least one lighthouse? 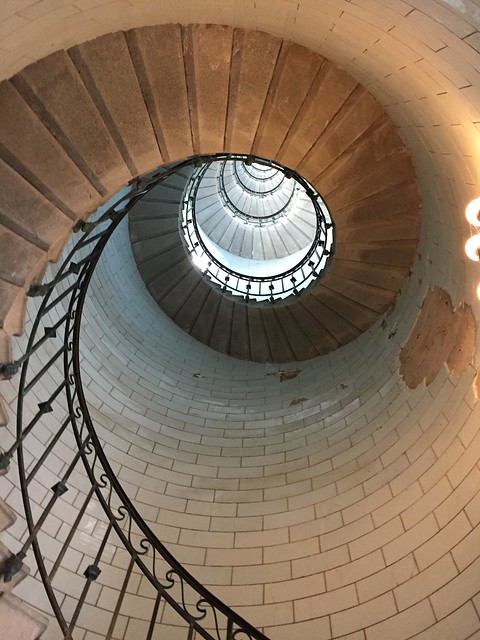 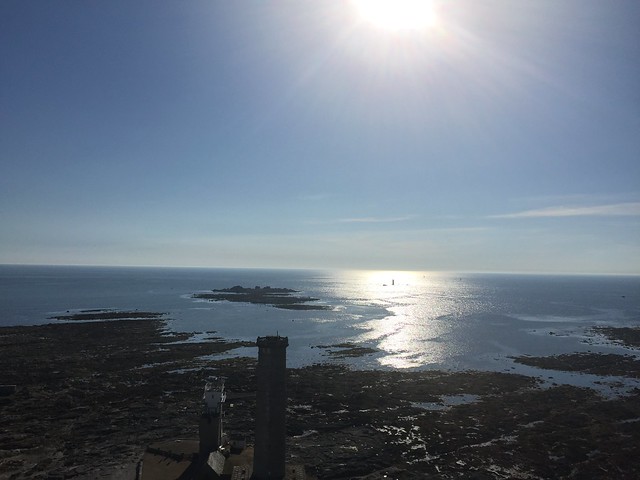 We did not go to the cathedral for mass. Sadly, mass was just as long as in the cathedral. Most of Sunday was spent cleaning the house within an inch of its life. Mr. Waffle and I went up to Locronan where we admired the tourist filled streets and I bought a 750grm jar of salted butter caramel spread. It could be a while before we get back to Brittany and I want to make sure my needs are met.

With some difficulty we packed up all our belongings. 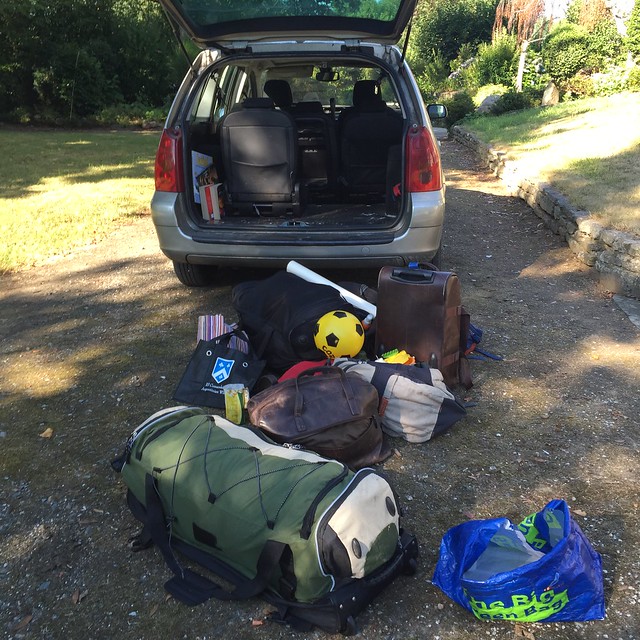 The Feast of the Assumption continues to be celebrated in France with enthusiasm which meant we had the greatest difficulty in getting lunch on the road to the ferry but, happily, Dinan met our needs. And then it was on to the ferry and safely home.