So we are slowly getting back to normal after the return from the holidays and the departure of Herself for France. The two weeks between our return from Copenhagen and her departure were spent in a whirl of activity. Herself went to Belfast for a conference, Cork to say farewell to the relatives before departing on her odyssey (a financially very worthwhile journey although, in fairness, that was not at all her motivation) and Donegal to the Gaeltacht with the school. That’s a lot of travelling in a fortnight even if you haven’t just come back from Denmark and are about to depart for France. Also, she has a vast circle of friends all of whom had to be seen and bidden a fond farewell, some more than once. When she came back from the Gaeltacht (last Wednesday), I announced to the family that she would not be going away again before she went to France. Michael voiced mild surprise, “Was she away? I thought she was up in her room.” This may explain why he feels that, at least initially, he may not miss her.

On Saturday morning Mr. Waffle and I went out for breakfast in town leaving the boys to the tender mercies of the x-box. We signed them up for French classes until Christmas, news which they greeted with the amount of enthusiasm you might imagine. Our lovely, lovely French childminder is finally sick of Ireland and moving back to France. He had been coming on Friday afternoons to play games with the boys and force them to speak French whether they liked it or not but now he is gone and we have to consider alternatives.

On Saturday afternoon we had the street party and it says a great deal for our residents’ committee that they managed to pick a rainy afternoon after the finest summer we have had in 40 years. That said, it was nice to see all the younger children who live nearby and the new families who have moved to the area. Michael really enjoyed it but Daniel was not in the mood for it although he came and played football and basketball with the other children. He had just returned from his final hurling game. While he likes Gaelic football, he has been lobbying to give up hurling for some time and yesterday was, by agreement, his last hurling game ever (end of an era etc.). His team was beaten 6-19 to 1-2 and he is not one to shrug off defeat lightly. Perhaps finishing on a low note. He has also been recently diagnosed with Osgood Schlatter disease which is not serious but explains why he has had a lump on his knee for years and was limping after every match and training and means I have had to notch my sympathy levels up from my traditional, “you’re grand”. Apparently you grow out of it so the cure is, basically, just wait. It was not maybe the ideal moment for him to join in the street party fun.

This morning we were back to mass in the parish for the first time in ages. Some new priest turned up. He spoke on the second reading which was a nice one (religious people, how come so much St. Paul and so little James?) about how every person has value and we shouldn’t judge based on appearances or wealth. This is the part of Catholic teaching that really appeals to the wishy-washy liberal in me. So I was not delighted when the priest used it as a starting point for saying that probably no one in the congregation had any importance in the world and yet we could influence things even though we were pretty powerless. He suggested we take the example of Saint Serapia who sold herself into slavery as she felt that this was how she could serve God (without wishing to criticise Saint Serapia, I am not completely convinced). I am possibly being a bit chippy here but I resented the way he patronised the congregation of this parish some of whom are perhaps not particularly rich; it being Ireland, I can absolutely guarantee you that quite apart from the number of the parishioners who were themselves very important in the world, every one of those parishioners, even if not “important in the world” (and pray define that and isn’t the point of the reading that importance in the eyes of the world is not important in the eyes of God?) has great influence with all kinds of people who are “important” in the tiny pond that is Ireland. By the way, please note the irony of my being judgemental about a priest’s sermon on a reading about the importance of not being judgemental. If I have one fault… (as a friend’s brother said to her, “If you have one fault?)

In other religion related news, our musical director had one of her pieces sung during one of the events when the Pope came to visit and we are all suitably impressed. She jotted it on the back of an envelope in 1996 and now it is sung all over the place. The excitement.

We had Mr. Waffle’s parents and their carer around for lunch and then found ourselves slightly at a loose end. My programme of constantly ringing herself for updates yielded fruit and she called to tell us that she had finally reached her destination in the west of France after her orientation in Paris. She’s a bit flattened, poor mite, but she seemed in reasonably good form, all things considered. She’s starting in the Lycée tomorrow and has promised to ring to update us tomorrow evening. It’s all go.

Back in Dublin, after some deliberation, I forced Mr. Waffle and the boys to go up the restored Daniel O’Connell tower which was only moderately successful. 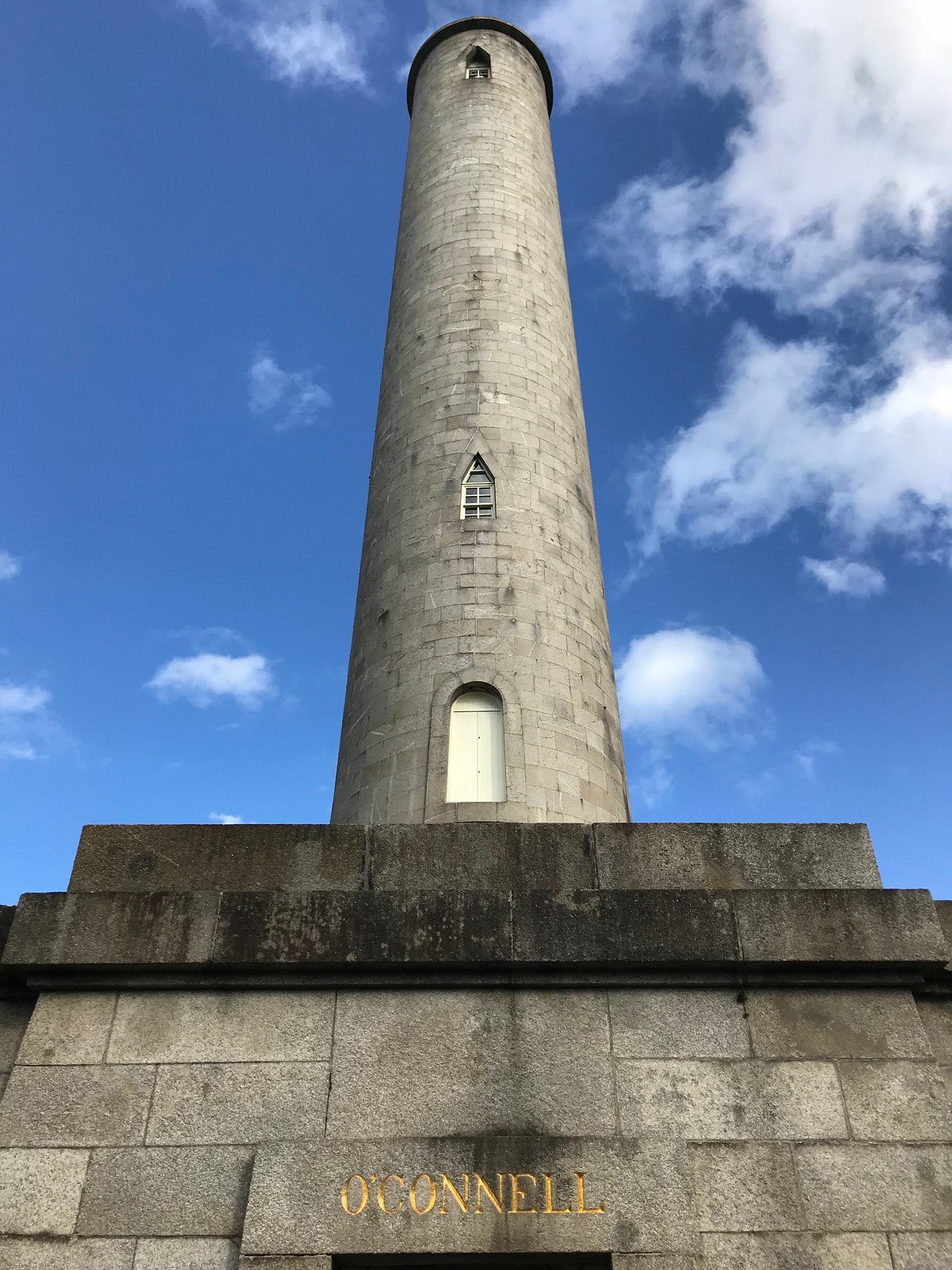 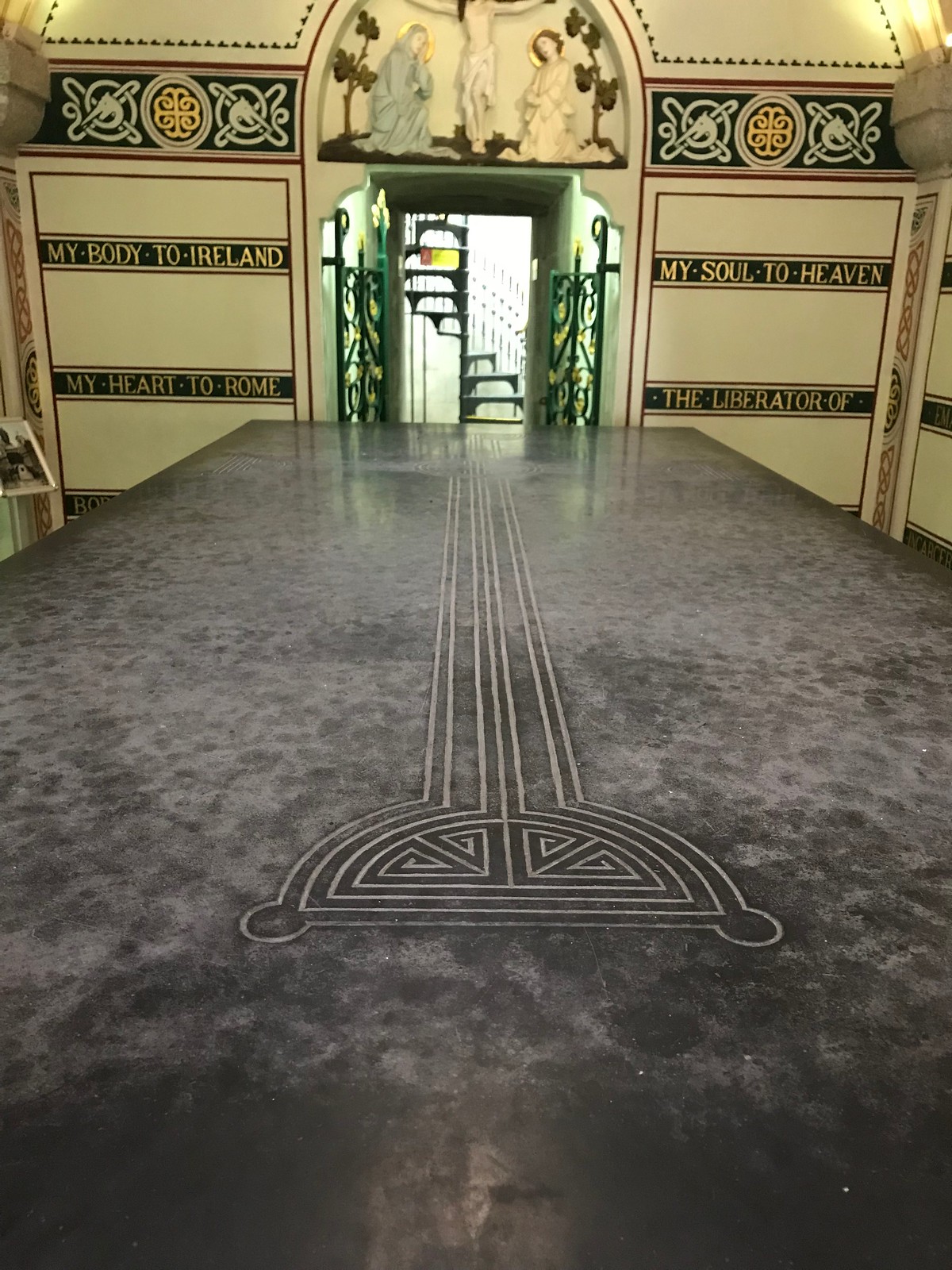 On the plus side, we got to touch the coffin which, apparently brings good luck. A little unlikely, I would have thought but like Niels Bohr and his horseshoe, I understand it works whether you believe in it or not. 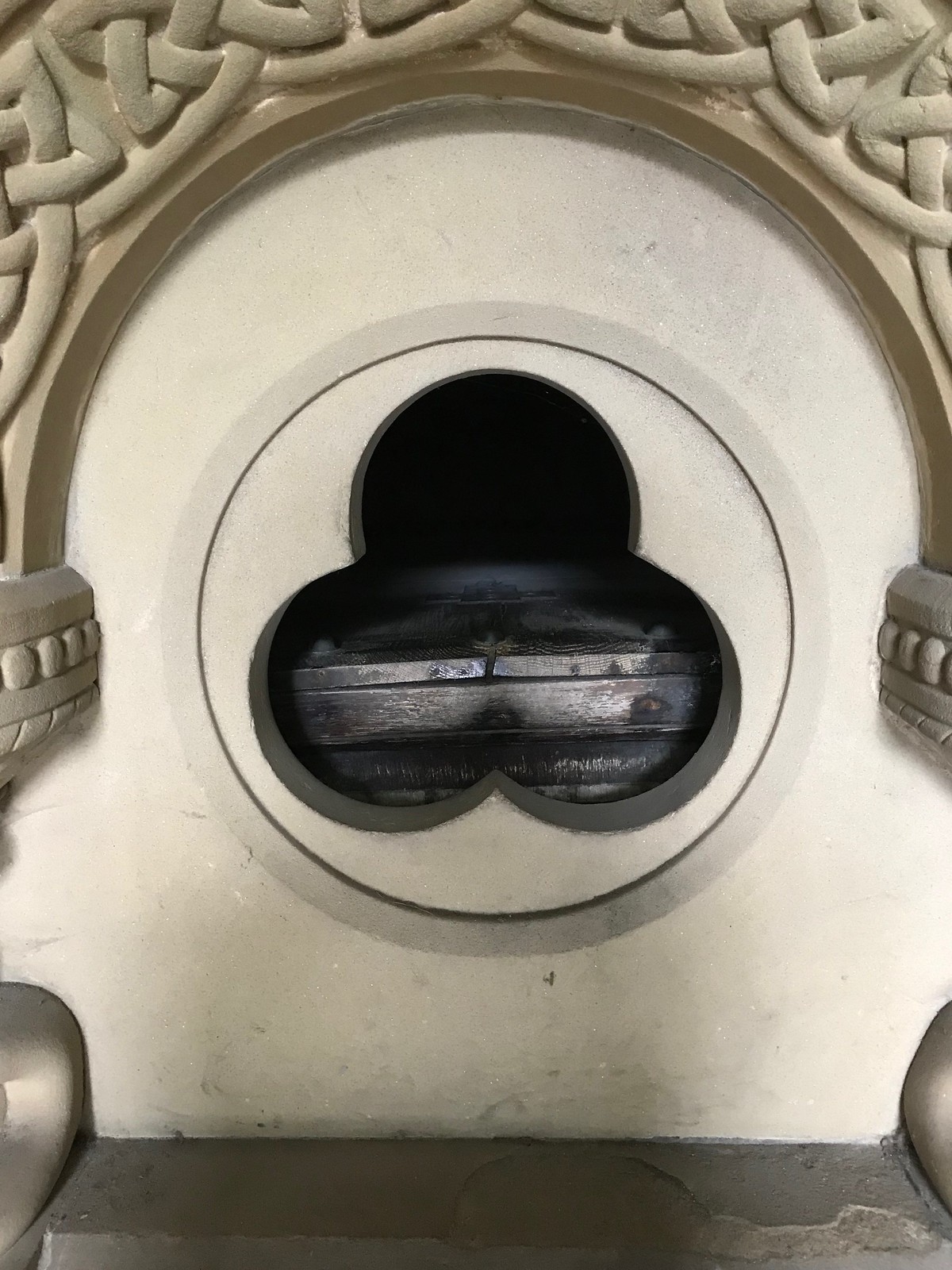 We were all reasonably interested but it turns out Osgood Schlatter disease is not super-consistent with playing hurling, football, basketball and climbing to the top of a round tower in one weekend. 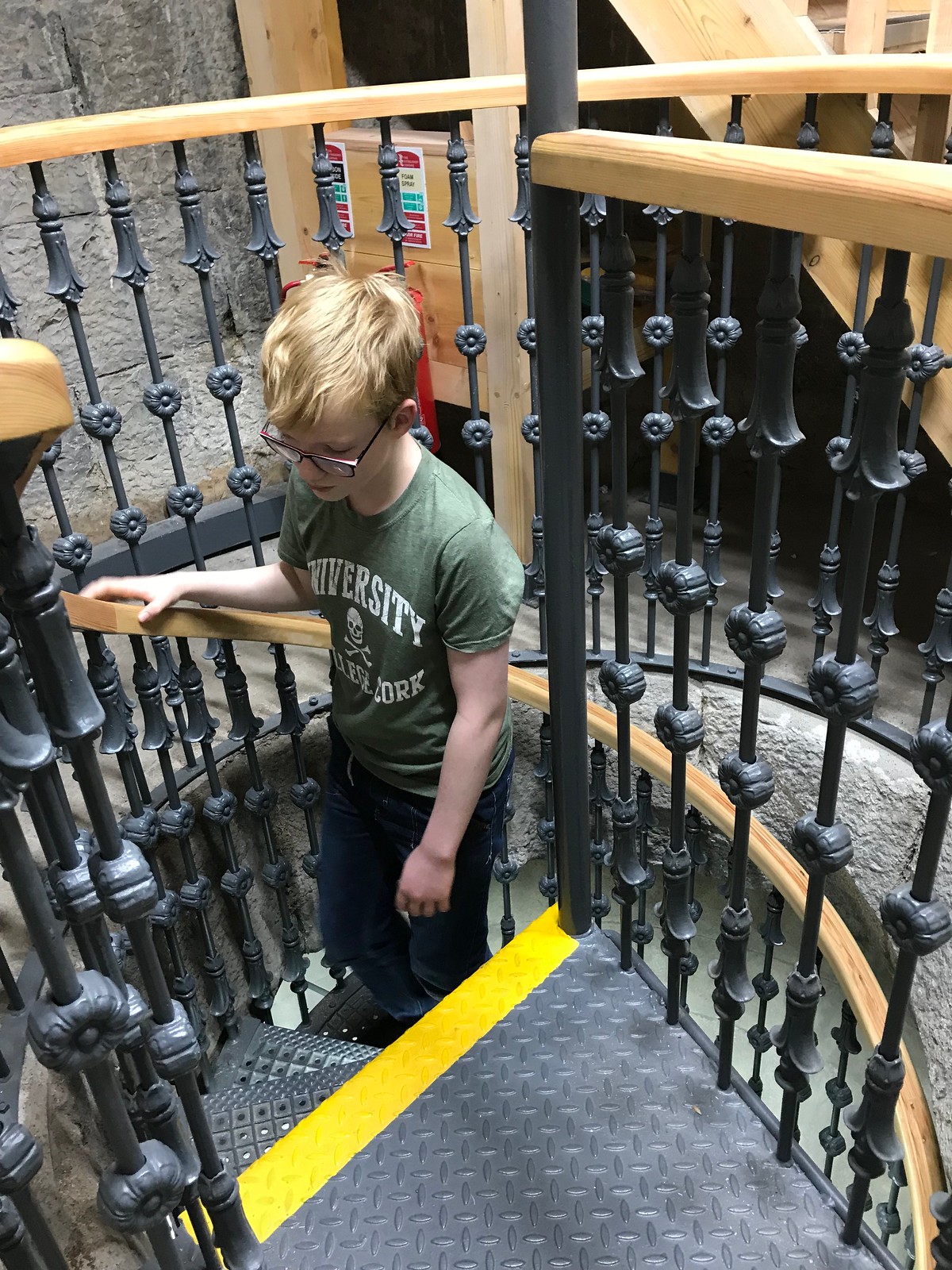 Still and all, good views (in the foreground is the museum building which I did not make us visit although the price was covered in our entry ticket to the tower; we have been before and I am merciful). 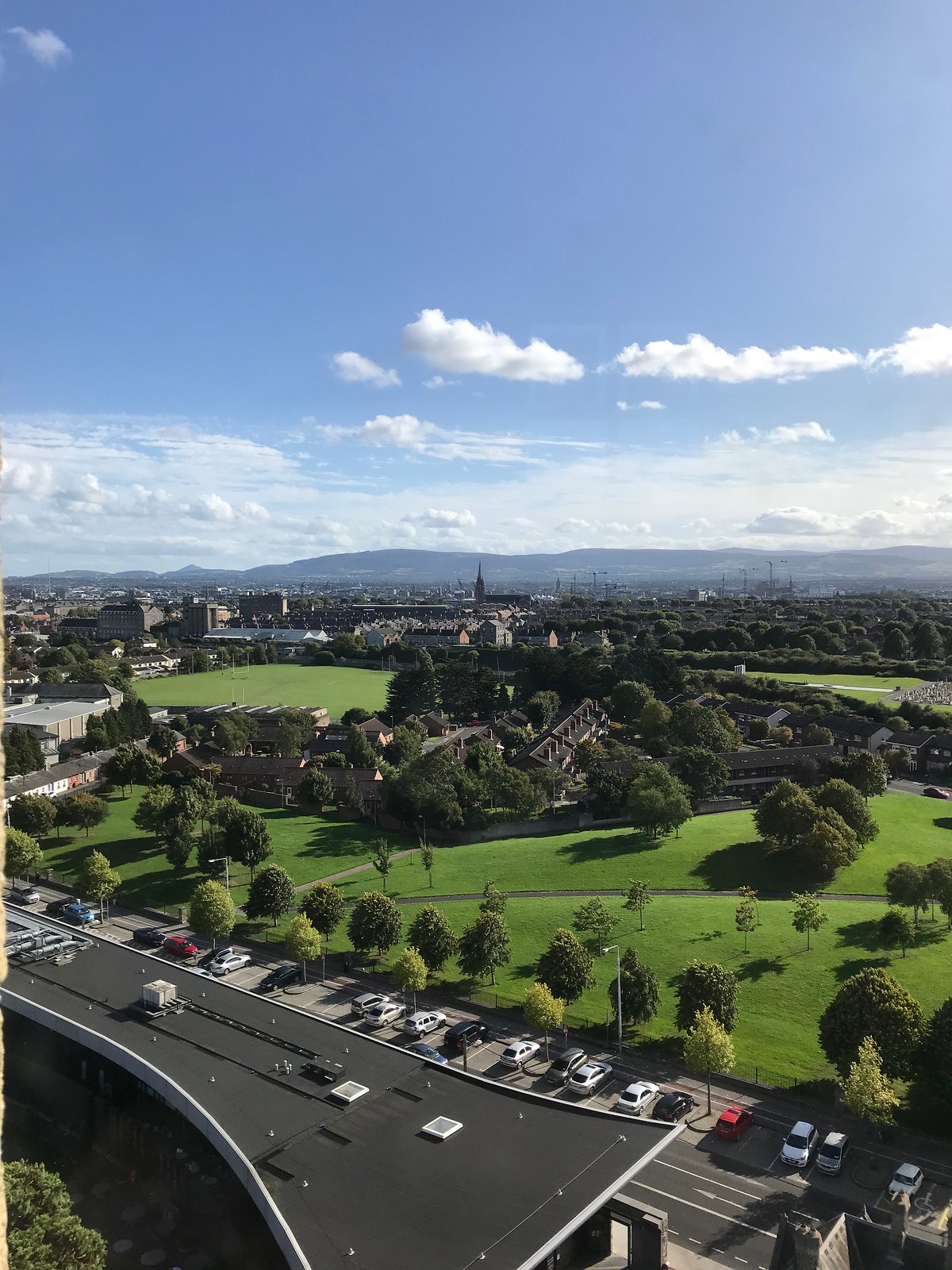 And sighting of a dangerous handrail. So definitely not a complete loss. 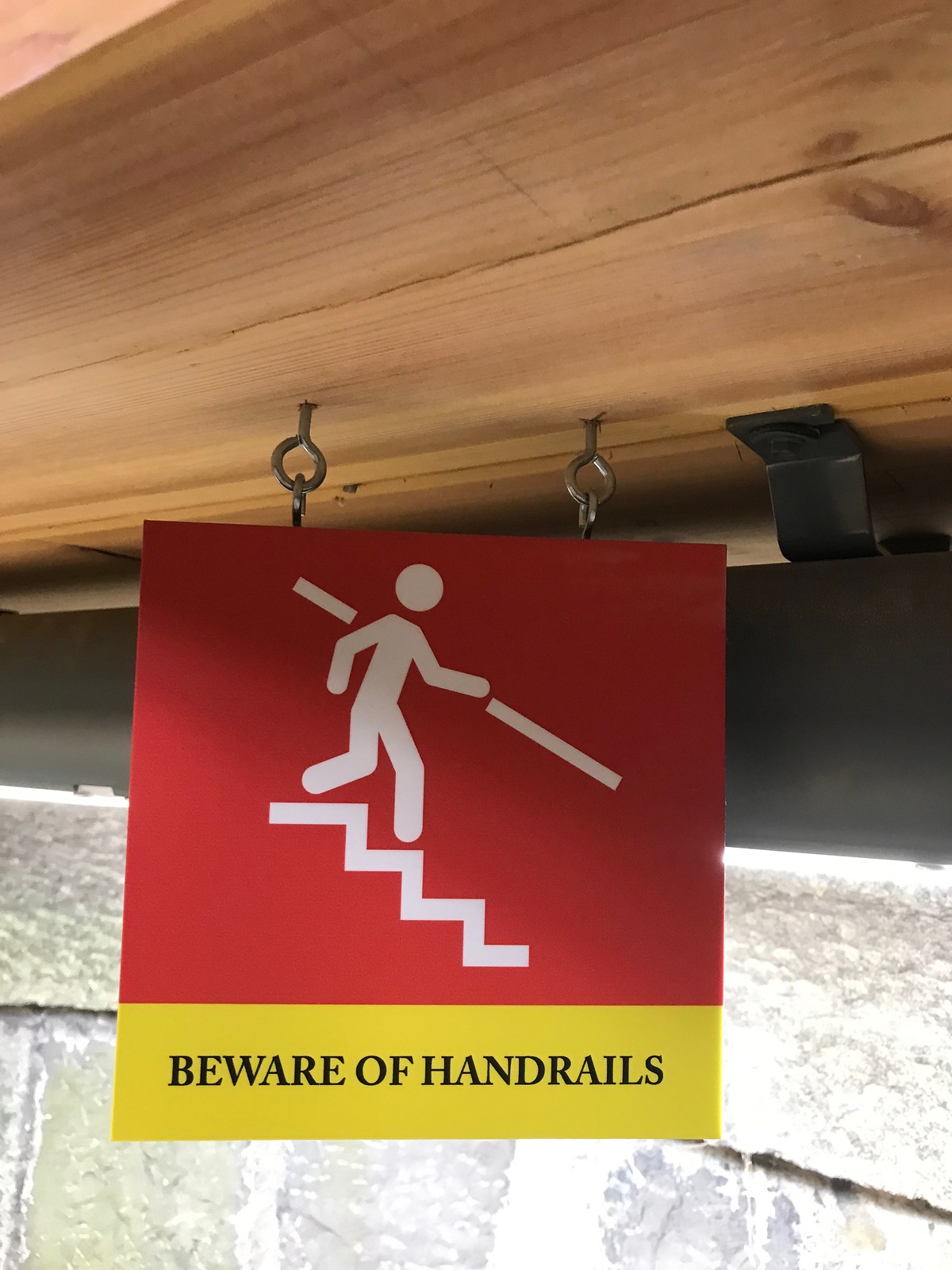 We got home for 6 for poor Mr. Waffle to take a work call and the rest of the evening has passed off peacefully so far.