I’ve got nothing. No recollection of what happened on yet another Monday in lock down.

An elderly woman who was born on our road and has been a very active member of the local residents’ association went into hospital a while back. Mr. Waffle heard that she has cancer and then had a stroke so she is going into a nursing home and not coming home from hospital. It’s so sad. She was always in her front garden, sweeping the path or hanging over the hedge chatting to someone. And when she dies, we won’t even be able to go to the funeral. Very depressing.

On Daniel’s Tuesday course, he and his group did something in 70 lines of code whereas all the other teams had at least 120 lines. Apparently fewer lines is better. I tell you this lest you too make the same kind of tactless remark as me based on an understanding that surely more is better.

Herself went to the orthodontist and he has finally, finally said that he is going to take off her braces in June. This has been a complete marathon. I really regret going in to the process in the first place. Her teeth were fine really. I blame the Americans.

We watched a German film about the devil’s daughter who is staying with a nice family and trying to tempt their teenage daughter. Lots of school vocabulary, very speedy dialogue which was challenging but good for all of us.

The State Examinations Commission issued new exam guidelines and apparently, inter alia, the Shakespeare question in English will be optional this year. Herself was delighted and she likes Shakespeare. She had two outstanding King Lear essays and felt that now the teacher would no longer want her to complete them (spoiler alert: the teacher still wants her to do the essays).

I felt a bit unwell when I got home from work so took myself up to bed at 8.30. Poor Michael had made a very nice risotto for dinner and was cast into understandable gloom when I merely pushed it round my plate and then departed for bed. Herself said reproachfully that if I had Covid, she wouldn’t be able to do her orals.

I woke up feeling fine (not Covid, then). This would have been my father’s 96th birthday. I thought about him a lot all day. A friend sent me a card offering perpetual masses for my father and mother and I was amazed how pleased I was. Am I going to become obsessed by religion in my old age?

At school, herself did mock Irish and German orals. The former was more satisfactory than the latter. Her lovely German teacher, looked out the window during the class and said, “Oh I see a bunny in the yard, let’s go outside and see if we can all see him.” She’d bought them all Easter eggs and put them in the yard. This class of 17/18 year olds were delighted which is quite sweet.

Daniel’s GAA coaches ran a zoom games session and they played 2 truths and a lie and he had such a good time. Poor Dan, fun is in short supply these days. I am very grateful to the coaches who organised the whole thing. They have day jobs and I can’t imagine that spending time organising an evening of online games was great fun for them.

Friday, March 26, 2021 – Last day of school before the Easter holidays

Herself had her actual Leaving Cert French oral. She sat 2 metres from the examiner with two sheets of perspex between them, the windows open and both of them wearing masks so I think risk of infection was low. In fairness, her French is good so it all passed off peacefully and she was glad to have the first real exam experience out of the way.

I had a good long Skype call with my friend in Brussels. They’re about to go into lock down again and she is quietly resigned.

I ordered from Uno Mas for dinner. It’s a sister restaurant to Etto which I love but I just didn’t like it as much. I mean it was nice but assembly was tough and nearly floored me. Highlight was waiting to pick it up and singing along with herself to Dolly Parton (“Here you come again” – how does she know this number? Dolly is very popular with the young people, it transpires).

Daniel, Michael and I watched “The Return of the King” which we all enjoyed hugely. Mr. Waffle drifted in and out making slightly snarky comments. He is not a fantasy fan. We had our revenge when he thought it was surely over and there was a final half hour of return to the Shire.

A day of high drama. Herself came into my room at 9.15 fully of adrenaline in advance of her Leaving Cert oral Irish exam. We sang Dolly Parton (reliving the previous day’s excitement) and she danced around the room. Both her brothers came to the bedroom door having been inadvertently awoken by our antics at this early hour, “Either the singing or the dancing but not both,” said Daniel wearily.

I dropped her to school. She was nervous but she’s good at Irish and she was well prepared. She did the oral and it was the exam of dreams. It went really, really well. She noticed as she was leaving the room that the recording was only ten minutes. She was surprised and raised it with the teachers. It turned out that there was a fault in the recording software and it had cut everyone off after ten minutes. All of the earlier candidates had to be recalled and she had to do her exam again. Her Irish teacher said that it was the worst thing that he had ever heard of happening in an oral exam and he would use her as a cautionary tale for future generations of students. She was not very comforted by this. Anyway, she did the exam again and it went fine but not as well as the first time. The exam recordings have to be sent off to the State Examinations Commission and, apparently, they only mark what they get so it was really fortunate that she spotted the problem as if she hadn’t everyone in the school would have been marked down. She was a bit wrung by the whole thing.

I took to her to Lidl and Tesco to buy Easter tat: thin on the ground. I thought she might find something she would like but no joy. There weren’t even any mini eggs. We made an Easter wreath out of bendy branches and I stuck it up in the hall. 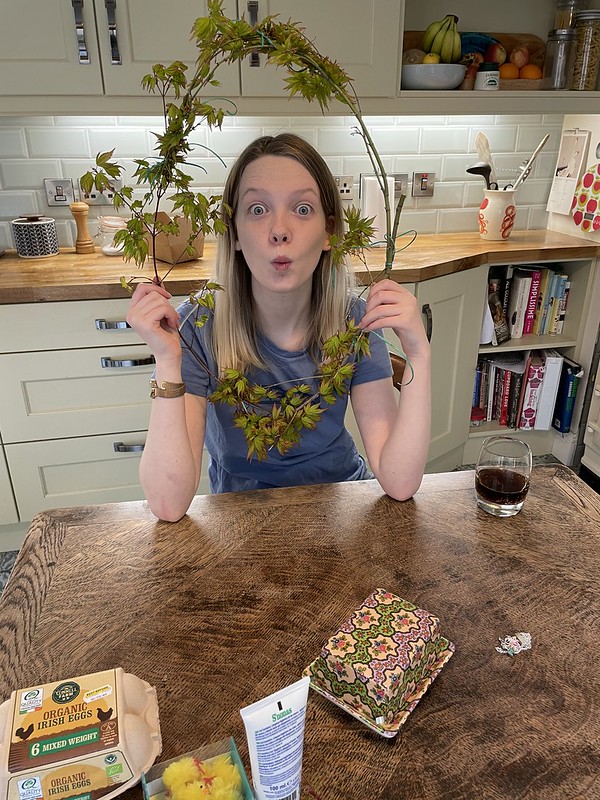 Herself picked the film night film. It was a Senegalese film called “Atlantique” which was largely in Wolof and won a prize in Cannes. The children really enjoyed it. I want to be the kind of person who finds a film in Wolof about the situation of African emigrants fleeing to Europe in death trap boats ideal Saturday night viewing but I’m not. I found it hard going. Before the twist, I dozed slightly. I woke up after the twist and it did improve but, lads, I can’t recommend.

I’d completely forgotten that the clocks were going forward (it’s bright outside at 8pm as I write). At least we avoided trooping in late for 11.30 mass. Mr. Waffle and I went for a walk and got rained on but it was not as unpleasant as that sounds. We passed a church with piles of palm outside the door so we picked some up.

Top tip on making your Easter wreath: make sure your bendy tree is not one whose leaves die after a short time indoors. This was the wreath yesterday, maybe not terrific but, you know, ok: 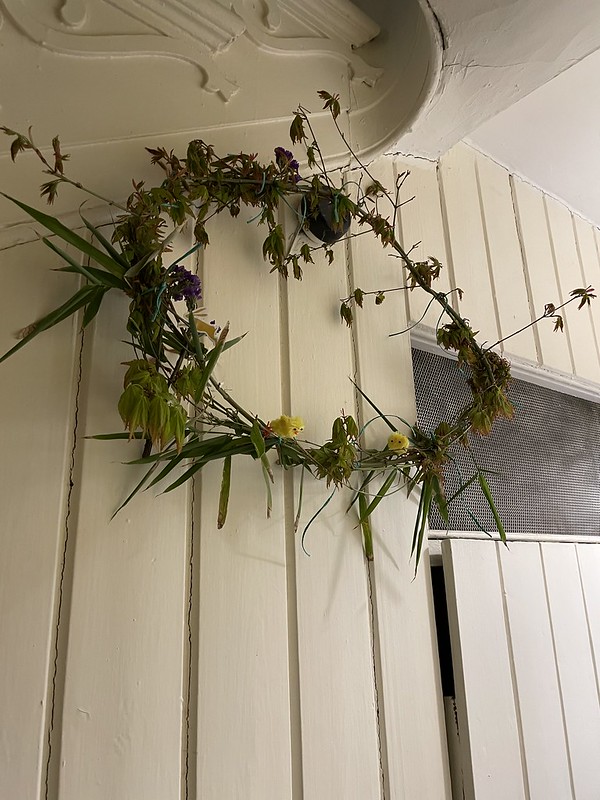 Today, alas, it was dead and positively funereal looking. Back to the drawing board: 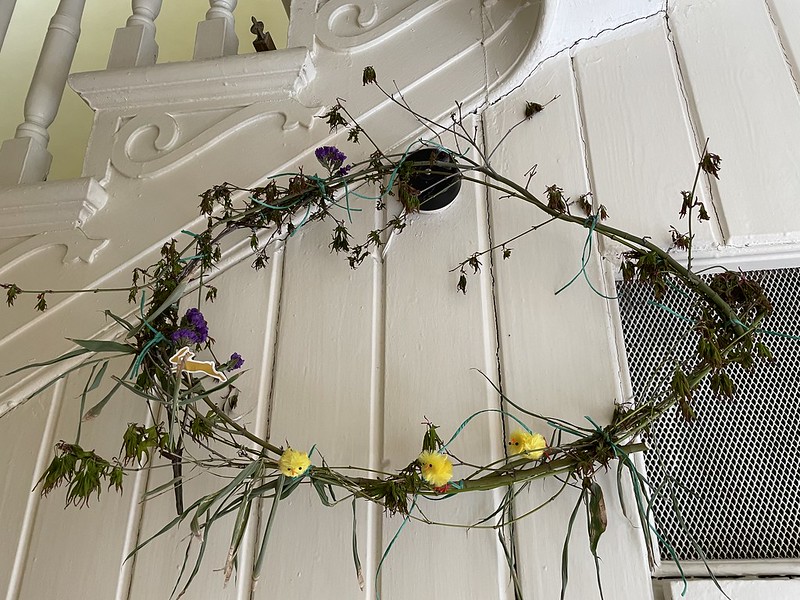 My apple tree branch continues to be a source of delight though, so there’s that. 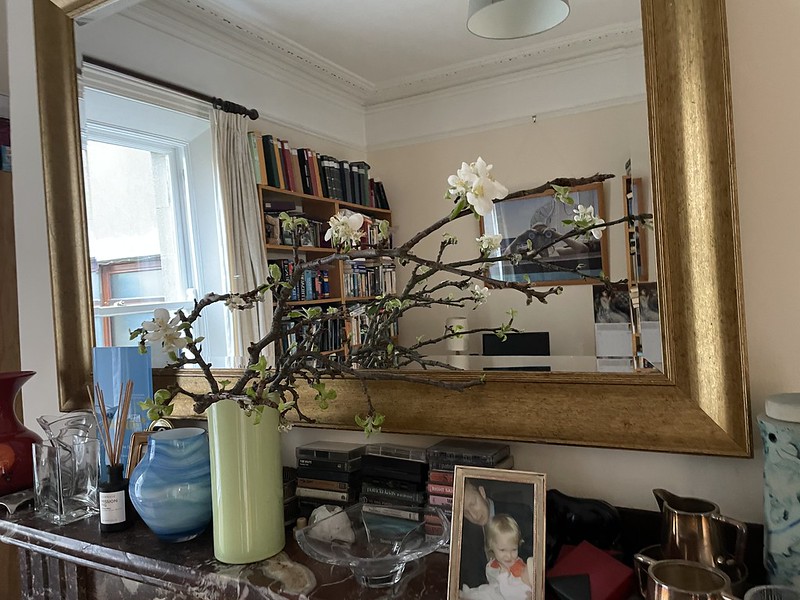 Update me on your own week, ah go on, do.