Daniel and Michael are 16. This growing up is very speedy for parents at least. Full birthday posts to follow. Something to look forward to. 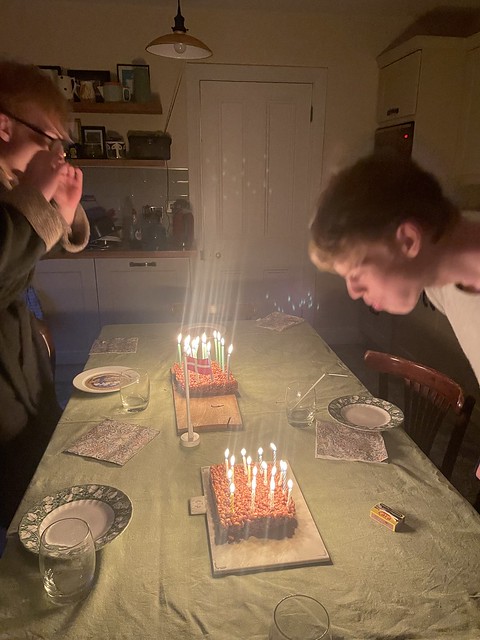 Herself had some friends from primary school around. Two girls I have known since they were five years old and they are now both (v tall) young women in college. Surprising.

Billa O’Connell died and everyone on my sister’s road stood out to watch the hearse go be. Ah the pantomimes of my youth. One of my colleagues reminded me of a line of his, “Are you happily married or living in Kinsale?” Even in the 60s, Kinsale was known for its cosmopolitan ways.

This would have been my parents’ 54th wedding anniversary.

Our cleaner is moving back to the Ukraine after many years living in Ireland. Good for her. Bad for us. She is going to find us a replacement. Fingers crossed.

Mr. Waffle’s Tuesday night soccer is back. He’s delighted. I retired to bed early with a headache, like the Victorian matron I am at heart.

I am delighted with the woman I have found to do French conversation with the boys: she lives around the corner and she’s happy to play board games with them and they seem to like her. She’s studying in Ireland for a year. When we first met her, she was wearing make up but not when she turned up this evening. She looked so young that for a moment I thought she was one of their school friends. I suppose she’s not that much older than them. Middle age is not so much creeping up on me as mugging me and dragging me down a blind alley.

The light bulb in the downstairs bathroom needed to be changed and Mr. Waffle found a pool of stagnant water in the bottom of the bulb container. We assume it dates from the works in the upstairs bathroom and, happily, no one was electrocuted. I will keep you posted on developments.

I was talking to my sister about my trip to the England the following day and confessed to a feeling of mild trepidation. Conversation as follows.

Me: It’s been two years since I was on a plane. When were you last abroad?

Her: Actually, I was in Holland a couple of weeks ago.

Her: Well, I wanted to keep it a secret because I knew if our brother Dan heard he would ask 200 million questions and I couldn’t face it. You actually called me while I was there and, remember, I said that I couldn’t talk.

Me: Not really. This is very weird.

Her: And in vain because Dan rang while I was there and the first thing he said was “Are you abroad, that’s a foreign ring tone, why are you abroad?”

Me: Honestly, it’s hard to know which of you is weirder.

My brother, Sherlock Phones as he’s known in the family circle. Anyway, she said no one is wearing masks in Holland.

It was the Princess’s last night at home and I was quite sad. She, however, was energised by her ongoing effort to deal with the IT problems she was encountering with her college administration.

Another generation off to England. Oh alas. Still herself is delighted and very excited. We agonised about whether to get the ferry or fly but in view of the petrol shortages in England, flying was probably the better option. 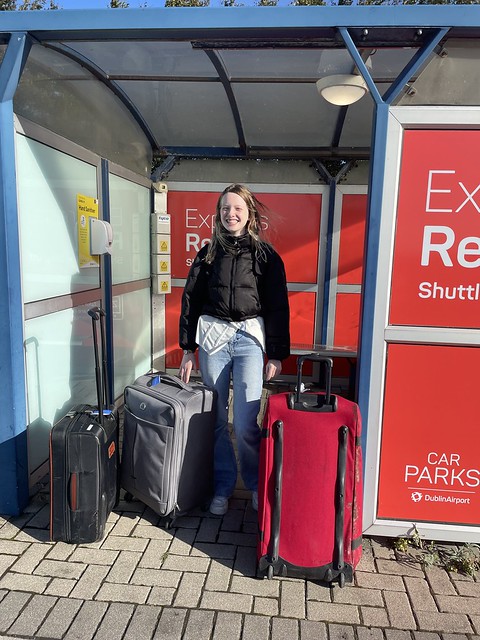 Herself has a loads of euros which she suggests we might change at a more advantageous rate than the bank. As she put it, “Using the Bank of Mum and Dad for actual banking.” The airport was quiet but not impossibly so and everything went pretty smoothly. Herself dropped an ear pod as we were landing and, as is the way of such things, it promptly rolled up the plane and she was in agonies lest someone inadvertently stand on it. Not only did I have to disturb the people in front to get it but they had to go to the people in front of them in turn and so on until it was safely returned.

I remember when herself was three months old I went to a friend’s wedding. Herself was a bit sick and our teenage babysitter procured by the hotel abandoned her post in face of the incessant wailing. Mr. Waffle went to tend to her. When the bride asked where he was, I explained. She promptly dispatched her mother, a GP, to inspect the baby. Her mother came and brought a friend who was a pediatrician. I was mortified that she should be pulled away for work at her daughter’s wedding. As the two women examined my baby (she was grand, thanks for asking, the mother of the bride made me drop by her house in the morning for a further look and herself lay in my arms looking like butter wouldn’t melt in her mouth), I said, “I’ve never been so embarrassed in my life.” And the mother of the bride smiled and said, “Well, you’d better get used to that feeling now that you have children because this won’t be the worst of it” How very right she was.

We had some difficulty finding somewhere to stay for the weekend but we eventually found a guest house which was a bit grim but clean. I said to Mr. Waffle, “I don’t remember the last time we’ve stayed somewhere quite so vile.” And he said, “Aren’t we very lucky that this is the case.” Which I suppose is true, Pollyanna.

We brought lots of stuff over in suitcases but we had to buy lots of supplies when we got there: the disadvantage of not having the car. Single duvets were at a premium, I can tell you. A sister of a friend saw us in Marks and Spencer’s (because if you’re Irish, there’s always someone who’ll see you, I am genuinely curious as to how Irish people have affairs) but left us alone as we looked a bit stressed. Still we achieved much on our first day and went to dinner in a Lebanese restaurant to celebrate. Herself is delighted by the range of vegetarian food available in England.

I found the mask thing a bit the opposite of the situation in Ireland. In Ireland, the default is that you wear a mask in shops and public places and the very odd person might not. In England, it seemed like the default was no mask but some people were still wearing them. I felt a bit odd with my Irish mask wearing habits. 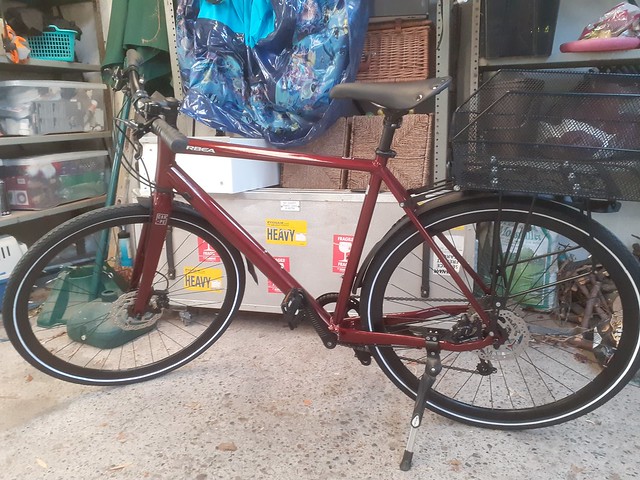 I digress. In England, it lashed rain on us but we broadly achieved our objectives and it was a tired but happy gang that went to dinner that night. 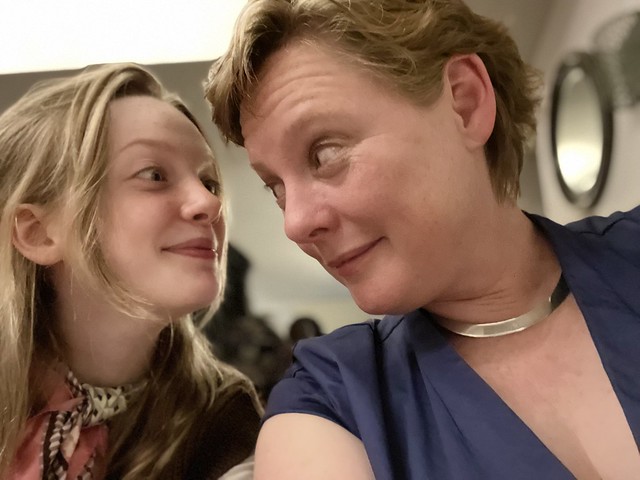 Herself said dolefully, “I’m about to start Freshers’ Week but I am exhausted by 9, how will this work?” How indeed?

Meanwhile her brothers had been living it up with their aunt in Dublin. A trip out for pizza and a plan to spend the following day playing cards with her partner in his saintly parents’ house.

We dropped herself and her pile of bedclothes and other essentials off to her on campus accommodation which, in fairness, is very nice and went for a walk which was delightful. 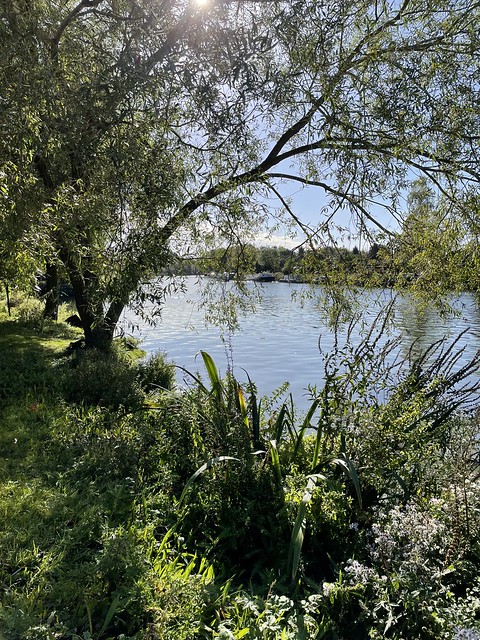 On our walk we met a Belgian film crew and Mr. Waffle gave them an interview (they were pretty pleased to find anyone who could speak French). Yes really. We checked the RTL website afterwards but, alas, his content appears to have been consigned to the cutting room floor.

Then we had lunch with herself and headed off back to the airport (nearly missed our luxurious – ahem – bus but did not). Mr. Waffle said that it was like the reverse of when we took her home from Edith Cavell, the maternity hospital in Brussels. We went in and there were two of us and we came out as three. This time we went over as three but only two of us came home.

It’s pretty hard when your child moves country at 18. I felt like I had a hole where my heart should be which is a weird physical sensation. When I got home, Mr. Waffle had bought me flowers to cheer me up. They were somewhat effective.

One of my friends messaged me to say that she had attended the school open night for new students via zoom and that the Princess was on it as a past pupil talking about her experience in the school. This was news to me. The fact that I found out about it immediately the session had ended further underlines the futility of trying to keep anything secret in this country.

I spoke to herself on the phone. She seems to be having a good time. She has found people who also like to read hard books. “Mum,” said she, “everyone here has read Beowulf and Ulysses.” Isn’t well for them? She seemed pleased anyway. I discovered in the post office that you can send a 20kg box to England for a mere €25. I was delighted. I asked the woman in the post office whether there was any limitation on the size of the parcel. “Let me put it this way,” said she, “someone posted a mattress yesterday.”