He’s still reading away. He’s very interested in books; economics, data and history in particular. He very much enjoyed Rousseau’s “Social Contract” which his sister got him for his birthday. As well as the 1000 page sci-fi anthology his parents got him. He is catholic in his reading tastes.

He sits at lunch time reading his book in school. Apparently no one bothers him one way or the other. He doesn’t care what the other children think, in any event. I find this extraordinary but lucky old him, I suppose.

He loves staying in his room playing online and reading Wikipedia. Odd things catch his interest. He arrived down to dinner last night with detailed information on the history of Taiwan. He finished Crusader Kings and vanquished the old enemy. 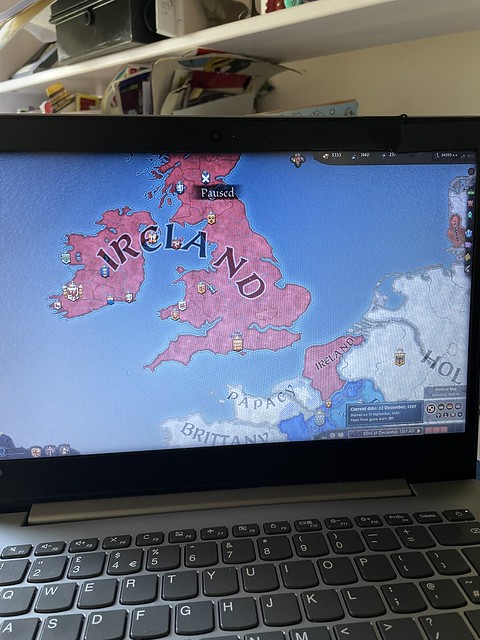 He is very much enjoying his online history class on Saturday mornings. I’m not sure whether he is going to take it for his Leaving Cert in the end but he’s certainly getting a lot out of it. He seems to be really liking his subjects this year. History, Geography, Economics and English are his favourites. More often than not he is to be found in the more esoteric reaches of the CSO website digging up data to create more complete essays than his teacher may be looking for. As the teacher said to me, “He has a real knack for it.”

He is still doing French conversation once a week and he does not love it. While his brother chats away in French, he is uncharacteristically silent. His comprehension remains excellent and when called upon he can speak although he chooses not to. When we were in the Netherlands, he hated being in a country where he didn’t speak the language and I am hoping that will encourage him in his French and German but maybe he’ll just never visit non-Anglophone countries?

Lock down was probably a bit easier for him than for his brother and sister. He is quite self-sufficient and likes to be in the house surrounded by his home comforts. Somewhat to our surprise he turned out to be a diligent and organised remote student. In some ways it suited him better than school. Still, it’s important for him to engage with other people whether he likes it or not. Mostly he’s happy enough in school these days.

He’s still extremely skinny and I find it a small miracle that he is growing. He eats almost nothing. I do not know what we would do without pasta and pesto. 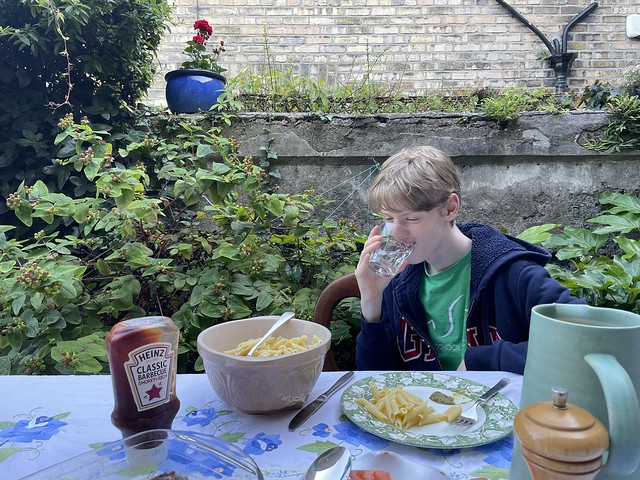 He has no real opinions about clothes as long as they are comfortable and warm. Warm is crucial. He often wanders around the house swathed in blankets and he owns not one but two of those wearable blanket things. Part of the reason he’s so cold must be because he’s so skinny. Mind you I am often frozen myself and am not skinny at all. 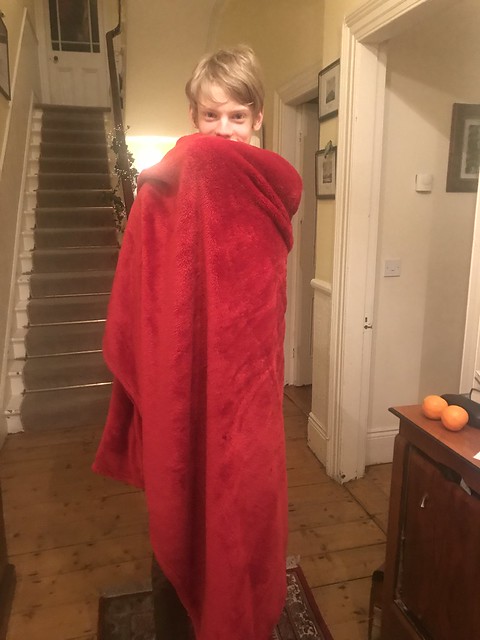 He has worn the same Gap anorak for years, getting bigger sizes as the years passed. It is very toasty. He wears his ski gloves all year round on the bike.

I bought my father a cashmere jumper for Christmas last year. For obvious reasons, it was no use to him, so I gave it to Michael. He loves it – it’s warm, it’s comfortable. He wears it all the time. I am slightly amused by the contrast between him and his peers. They all wear lycra sports gear. He wears the jumper I bought for his 95 year old grandfather. And gladly to boot. It may seem unlikely but the photos below were taken some time apart, the first on the Eastern seaboard, the second on the Western. I think we can agree that Michael’s approach is remarkably consistent. 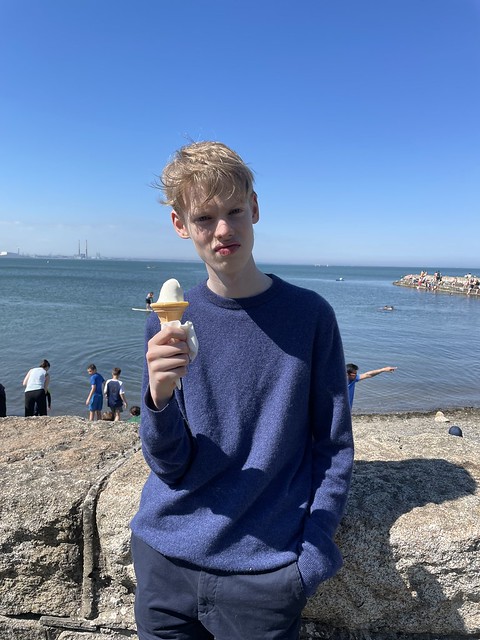 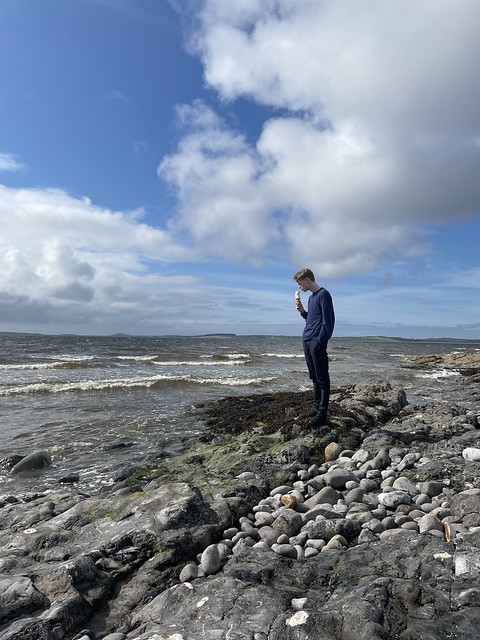 Like all of us, he did a lot of cycling in lock down. I wouldn’t say he loved it but as his only form of exercise, I was keen that he go for regular cycles. He is not interested in or at all enthusiastic about any sport as far as I can tell. He doesn’t mind skiing or skating but those are pretty niche activities in this jurisdiction.

I mean, I suppose he likes zip lining – he was always a child who liked a little bit of adrenaline.

He continues to get on pretty well with his brother. They have a lot in common and play cards together and talk about school and internet fads. Daniel will play board games with him as well, which he loves though he is always faintly reproachful that his mother won’t join in. 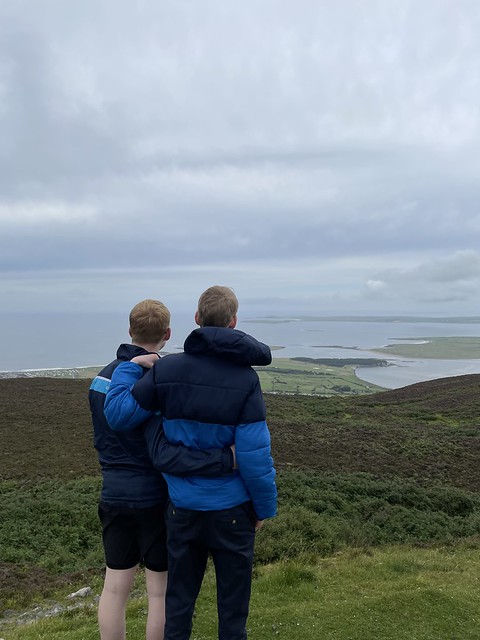 He and his sister were like ships passing in the night before she went to England and he has missed her a bit but not much. He casually said the other day that she wan’t part of the family any more and broke my ancient heart. Seeing my face, he amended it to “Not part of the active family.” It’s hard to imagine him and his sister calling each other for a chat but maybe when they’re both a bit older.

I think this photo isn’t a bad illustration of how the three of them interact together. 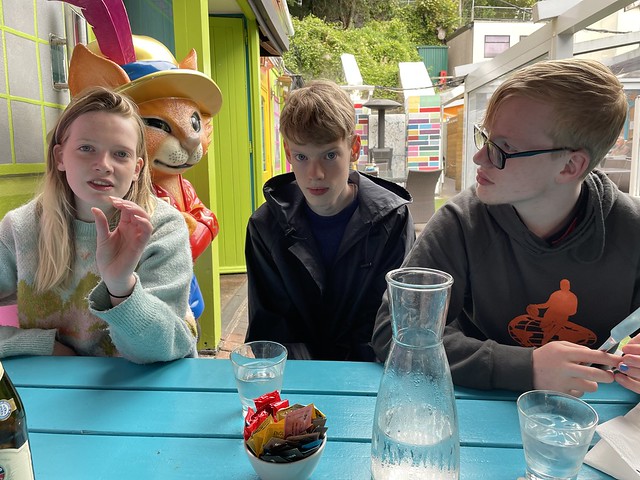 He is a very considerate child and, I assume it is for this reason that arriving home while the new cleaner was washing the kitchen floor, he decided to climb in the dining room window rather than walk through the kitchen. Of course, he nearly gave the poor woman heart failure when she saw him but it is evidence of kindly intent.

He loves his mother and has no hesitation in saying so or in giving her a hug in public. Does his mother love this? Oh yes she does. 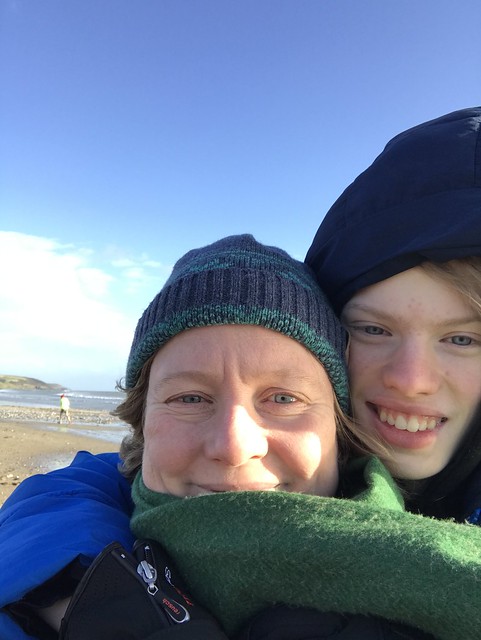 He has no interest in things and more money than he knows what to do with so he is very difficult to buy presents for. While I applaud his lack of interest in material things, it can be a bit trying for Santa.

He continues to be a wonderfully engaging public speaker and great at reading aloud, if called upon. They love this in school, of course.

When he dislikes a suggestion, he has taken to making a hissing sound to indicate his disapproval which I find hilarious and when he does it, we both end up laughing.

In fact, he makes us all laugh. And he’s very kind and generous. He is charming and delightful all round. And even his siblings occasionally agree with this assessment.