Waffle Palace tonight announced that the Princess had paid a courtesy call on her new subjects. She prononced herself pleased, and deigned to kiss them on leaving. Although only 36 hours old, the
new princes have caught on to court etiquette quickly: they have given her a number of presents every day, which may have helped them gain acceptance. A diplomatic incident theatened when the Princess attempted to retake possession of her turtle-shaped bath thermometer, but courtiers were able to smooth
things over… 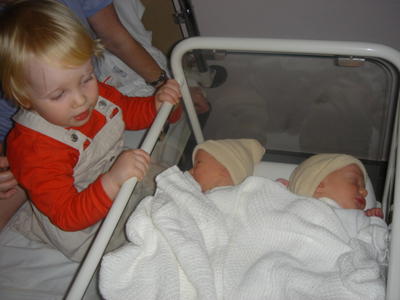 Mrs W was pleased with the way it went, and also very grateful for all the kind comments and sweeties.

Just make sure you hide the dolls’ pram – we used to steal my baby sister when Mum wasn’t looking ….. mind you, we always brought her back eventually.

Jordana
(Homepage)
on 29 September 2005 at 13:26
Congratulations!!! My Internet goes down for a day, and look what I miss. 🙂 I have no sweeties to give, but if I did, I would give them all to you for judicious dispersal among the Princess and her subjects.
May you have joyful days and restful nights.

Locotes
on 29 September 2005 at 14:50
Serves me right for not spending every waking hour on 20six waiting for updates – I go and miss the main event. Well many many congratulations, you seem to have done a fine job there.
(and congrats to Mr. W as well – ignore whatever herself might say, your role in this was just as important!)
😉

Lilo
on 29 September 2005 at 21:52
Congratulations to the Waffle family. I hope you’re getting enough sleep.

belgianwaffle
on 06 October 2005 at 14:18
Thank you kindly for sweeties and good wishes. I feel exceptionally popular!