The Princess went to see her subjects (or co-princes) in the hospital again. The visit passed off without incident (only because we hid the thermometer).

Caption competition: what is Princess doing to baby Michael ? And what is he saying? A sweetie for the best caption… 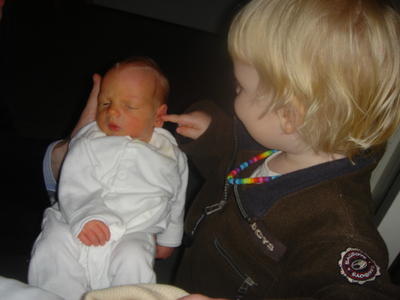 Kathy
(Homepage)
on 30 September 2005 at 23:04
Waahhh!!! I wasn’t paying attention. Of course it’s more like:
“Oh, great. here comes that kid who sitcks HER finger in my ear. Yeah, come on Princess, keep it up. One day I’ll have motor control, you know. And don’t you try to kiss me, either. Blech.”

belgianwaffle
on 06 October 2005 at 14:21
Gosh you’re all very clever…after much deliberation here in Waffle towers we have decided to award the sweetie to geepeemum. Congratulations on your extraordinary good fortune.

Locotes
on 06 October 2005 at 15:00
I know the competition is over – but I’ve put a LOT of thought into this – and I believe the exact utterances were…