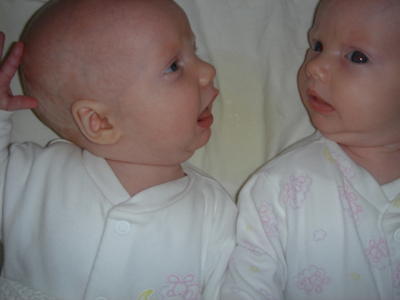 If I could use the photoshop thingy, I might get rid of the patch of
vomit between them on the sheet or I suppose I could use that time to
change the sheet..

“Wait a minute, I thought I was Michael.”

Who is that lady? And why does she keep flashing that bright light in our eyes?

Hey, it could be worse! We could have our pictures showing on the internet.

Twin 1: “So the master plan is as soon as she changes the sheet we vomit again, like this….”
Twin 2: “Shhh! I hear her coming! Just look cute so she doesn’t get suspicious!”

Twin 1:Nonono – I shaid, a man walksh into a bar wif an Englishman, an Irishman and a Scotshman …
Twin 2: Shtill doan geddit. Wha’s she puttin’ in our bocklesh anyway?

Twin1: If only I could roll…
Twin2: Mummmmmy!

“Are you as tired as I am of being used against your will for caption competitions?”

“You’re in a pink sleepsuit too – how old do you think we’ll be before we stop wearing the Princess’s clothes?”
(the curse of the younger brother – mine did it too!)

You people are actually really funny, I think I may do this again, I enjoyed that a lot and I need all the thrills I can get.

I recommend that you read this. It is the funniest thing I have read in some time.

Completely unrelated:
The Law Society of Ireland Gazette is anxious to reassure that solicitors are taking the latest slur on the legal profession seriously (too lengthy and depressing to go into). This month the magazine assures readers that Â“..the Society will accept, for the first time, complaints made other than in writingÂ”.Â  Way to go, thatÂ’’s bound to reassure the punters.

it frightened the bejeesus out of me. I’ve never had kids. I’d like to have them – or at least I did.

Well, you took it better than I imagined Norah.

H, reckon Minks is too experienced to be scared now, but at least Norah and Cookie are terrified.

Hilarious- a little bit of wee snuck out (only a little though, thank god.)

Hell- I’m never having a baby and I was terrified. And amused.
Do you think the Law Society will be accepting complaints such as rotten eggs hurled at them, by the way?

Minks, showing your experience – amused not terrified, see pog was terrified and amused in that order. Pog, suspect that they might not, worth a try though…