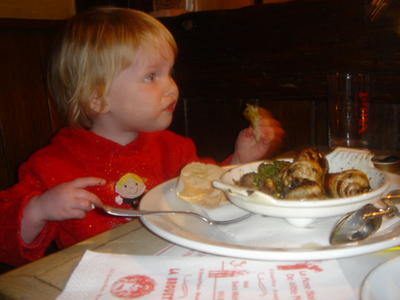 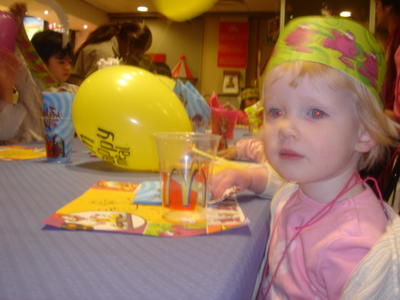 Also, on a completely separate note, for guilt ridden (i.e. all) mothers only, I recommend this.

The eyes in the second pic say it all… 🙂

those ~are~ escargot, aren’t they? i’m so impressed. and not a little frightened. and what a great link. so true, so true.

Beth, we don’t have cheerios in Belgium, they’ve had to be replaced by snails and waffles.
JD, um, what precisely…and where’s your new blog mister?
Kristin, yes it IS very comforting, isn’t it?
BHM for the snails or the McDo or the range?

I first missed the delineation of Saturday and Sunday and thought that Belgian MaccyD’s served escargot. Rats.

As for that blog post – more mothers should read it. I have to say for myself, though, that – now I am over the bout of postnatal depression – I have pretty much decided that I am a great mum no matter what I do. This is pretty easy once you realise that all those mums who talk about potty-training at 3 months and bed-sharing without ever losing any sleep and only ever feeding little Cosmo and Arabella organic, grain-fed grains etc are talking a load of bollocks. They are liars and I bet they don’t even have any babies.

Sorry about that KE, that would be excellent, they do serve beer here at McDos, if that’s any comfort…

The Waffles trotted out to the Africa Museum in Tervuren recently. It is largely unchanged since opening in 1910 and it now serves the double function of a colonial museum and a museum of colonialism. It tells you with a straight face how the Belgians saved the Congolese from the slave traders.  It also says that when the museum opened a number of live Africans were imported and put wandering around the grounds for public inspection. It’s a bizarre spot.  It also boasts a number of stuffed animals including an elephant and a giraffe which the Princess took a real shine to. I thought she might be distressed by the tableau vivant showing a number of leopards chewing on an antelope type thingy but I neednt have worried. This is the child who says Hello Mr. Quack Quack when we buy duck in the supermarket; she is devoid of sentiment.

And while I am speaking of museums, I would like to touch on the difficulty of access for handicapped persons.  I know all about this, because when you have a child, or indeed children, in a buggy, steps are much more challenging. I noticed that in the Africa Museum there is a sign on the double doors facing the road, saying ring here for handicapped access. As I watched the other day, the vast double doors swung open and a lady in a wheelchair and her husband emerged blinking in the sunlight. I cant feel that this is the handiest kind of entrance for the wheelchair user. In the Musée des Beaux Arts in town, the handicapped entrance is much less grand and, apparently more practical, just a glass sliding door on to the street. The only problem is that it is routinely locked and you must ring for admittance and wait.

The Palais des Beaux Arts (or Bozar as, in my view, it rather affectedly likes to be known – I read an interview with the director where he said that he was doing all sorts of radical things including the name change to put it on the map and you could now get in a taxi at the airport and ask to go to Bozar and be taken straight there; frankly, I have my doubts) is built on a hill. You will always end up at the Rue Royale entrance when the exhibition is down at the Rue Ravenstein end. I appreciate that the site presented Mr.
Horta with certain challenges but he seems to have decided to make a virtue out of necessity and built the whole place around steps. I don’t think there’s a lift either. The staff are very helpful and always offer to assist in buggy lifting and, one assumes, that, if there were a lift, they might have chosen to direct one to it. In a wheelchair? Forget it, I advise. On the plus side the staff are really lovely and they not only carried my buggy around a large part of the Palais Stoclet exhibition but also a) let me use (free!) the phone in reception when I asked whether there was a public
phone I could use (yes, I am the last person in Europe without a mobile) and b) cheerfully and speedily served myself and the Princess with tap water in the rather swish café. I suppose wheelchair users could always just wheel into the café and have a nice glass of water.

My favourite inaccessible location though is the museum
in the Parc Cinquentenaire. Access to this museum is via a long flight of steep steps which, even for the able bodied, present considerable difficulties, if not in peak physical condition. The wheelchair user is directed to a door beside the steps (or at least was, I must concede, I haven’t been there in about a year). When you ring, you wait. You are then brought by an attendant through a number of dirty corridors past numerous dusty and apparently disused rooms and up in a service lift to the museum proper which is, to be fair, well worth your exertions in getting in. Do you think that the museums here just don’t want children and wheelchair users to visit? Why would anyone object to small children in a museum, no, really?