Mr. Waffle and I had planned to go to Helsinki for a long weekend in September but, for a variety of reasons, it didn’t come off. Mostly because Mr. Waffle had put his back out again and couldn’t fly and partly because we were both very busy at work. My sister, however, was still booked to come and mind the children. So we decided to go on a more local break to Co. Down in Northern Ireland (yes, my love affair with Northern Ireland continues, thank you for asking).

On Saturday morning we drove up to Warrenpoint where it lashed rain. Due to Mr. Waffle’s bad back he spent all of the journey there lying horizontally in the front seat. I began to wonder was this the best idea we’d ever had. We had lunch in Warrenpoint which was fine but slow. Mr. Waffle had to keep getting up to walk around due to back pain so that was…unsettling.

View of the sea from Warrenpoint: 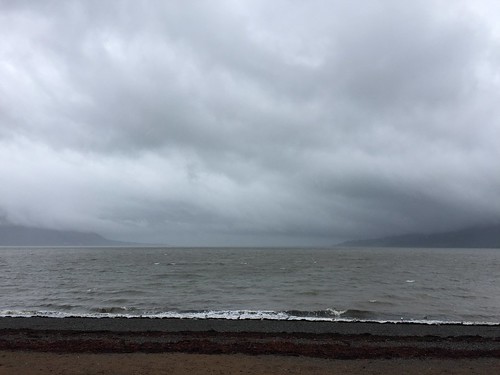 I am told that it is beautiful on a sunny day but your powers of imagination would want to be at full wattage to see that the day we were there.

The linguistic regime in the North is complicated. This was on the public toilets: 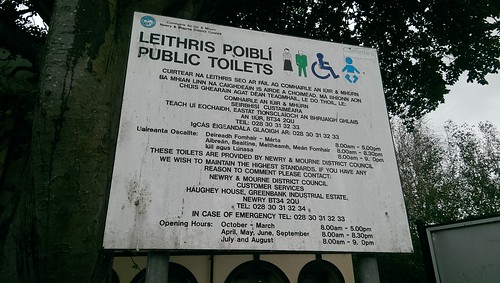 My friend from Belfast tells me that the only reason instructions were put on the toilets was so that the council could put it up in Irish as well as English. Who knows?

We went on to our guest house via the scenic route with the mountains of Mourne on the left and sparkling sea views on the right, or so the guidebook told us. In fact, we could see neither due to driving rain and heavy cloud and, as Mr. Waffle was horizontal, he would only have been able to enjoy any views with the aid of a periscope. Things picked up when we rolled into our destination. 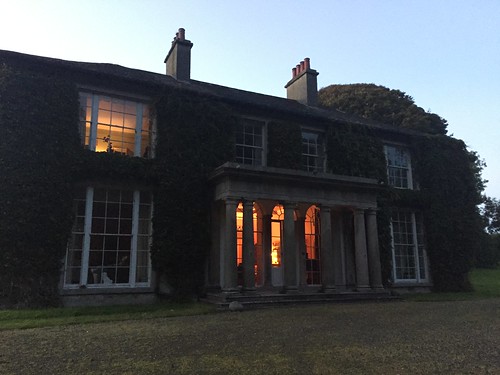 We went for a walk on the private beach before dinner but it was only moderately successful. The beach was lovely but damp and the mountains were invisible. 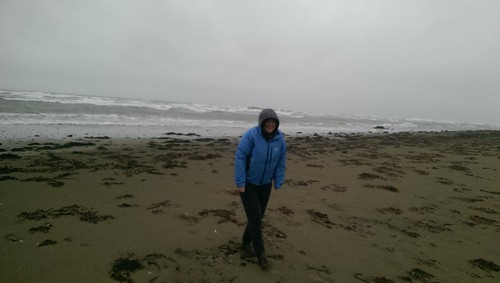 Our host was a very nice man but felt like he came from another era entirely. I asked Mr. Waffle who had spoken to him on the phone whether he was Irish. “No, English,” he said. In fact when we met him, we found that he had grown up in the house but been sent to school in England. He sounded much more upper class English than anyone I have ever met or heard and I have heard the Queen of England on the TV. It was quite bizarre. He was the only local I met who didn’t say “wee” all the time. Possibly, beaten out of him when he was a wee lad. His partner was a very nice Scottish woman who was a great grand-niece of Alice Keppel and therefore somewhat distantly related to the English royal family and even she sounded much less upper-class English than he did (though not exactly Scottish, I concede – spent some time with her exploring what is the difference between a marquis and a marquess and how each is pronounced; am not very much the wiser on either count). He clearly represented the last hold out of big house unionism. He was inclined to regard the island of Ireland as a whole and had an encyclopedic knowledge of hunts and polo grounds across the country. “I had a friend who used to play polo, but his horse kept getting injured and he jacked it in,” I said. “Well,” said he, “that’s why most people have three or four horses.” Only in certain circles, I would suggest. He had his own polo grounds and about 30 horses which provides a full explanation, I imagine, of why he was taking in paying guests.

We had a lovely bedroom with a beautiful view across the grounds. 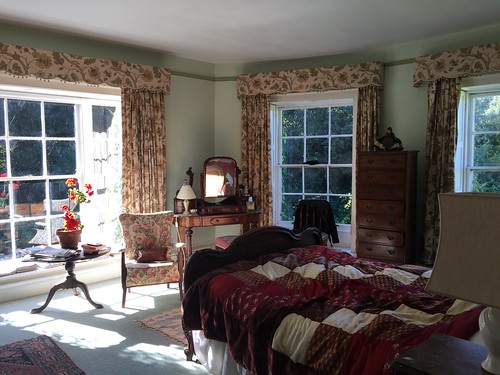 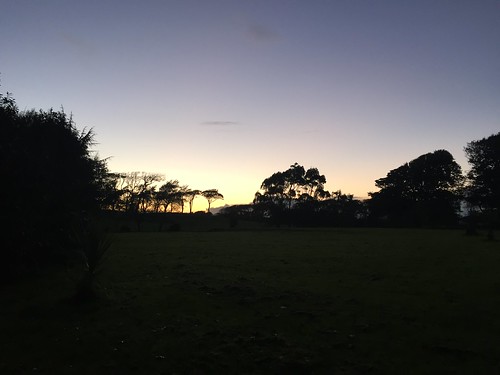 That night we went out for dinner to the Mourne seafood bar which was not entirely successful. Firstly, Mr. Waffle had to keep getting up and walking around because of his bad back and secondly, the food was only alright.

We went to bed in our beautiful bedroom, somewhat daunted but ready to face another day. The next day was Sunday. Despite our host’s advice we went into Downpatrick. The Protestant cathedral is delighful and has private boxes [not very common any more] and the graves of St. Patrick, St. Bridget and [possibly, I cannot quite remember], St. Columbanus. 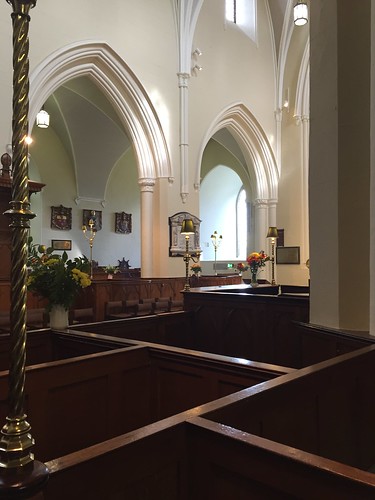 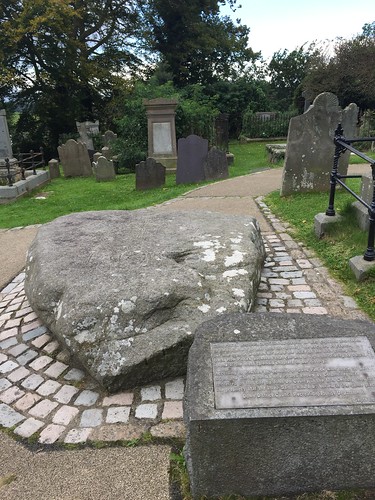 The old part of the town is lovely with elegant Georgian streets. We went to the St. Patrick’s museum/experience which wasn’t bad but was perhaps a bit elaborate for our needs. But the gift shop did give us a further chance to enjoy Northern Ireland’s exciting linguistic regime. 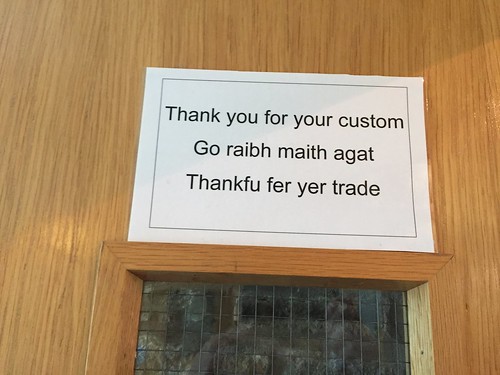 The previous day we had passed the Schomberg Ulster-Scots centre in Kilkeel. You know where you stand when your centre is called after one of William of Orange’s generals. Northern Ireland, where, like the Balkans, they make more history than they can consume locally. Joke adapted from Saki, I think, who told it better.

Earlier that morning we had been to mass in a less appealing part of the town. The church had shutters which was something I have never seen before. The priest saying mass was on a mission from the South [hardly necessary one would have thought] and we didn’t take to him; by the look of the long suffering parish priest who was hosting him, he hadn’t taken to him either. It was quite a long mass and involved small children and modern hymns with actions [my progress towards old reactionary continues apace and I did not enjoy it]. At the end of mass we had blessing of the cars which sounds positively heathen to me. I was telling our hosts about it later and Mr. Waffle asked whether I was mocking my religion in front of non co-religionists and I felt a bit guilty but it did seem quite uncatholic to me and more the kind of thing our evangelical friends would go for. Anyhow, our host said he hadn’t been to a service since he buried his grandmother [neither today nor yesterday, I would say] and, trying to make conversation with the vicar afterwards, remarked that the vicar must be looking forward to having his children home for Christmas to which the vicar replied, “I prefer visiting the sick, really.” That finished our host which is a pity as he has a church at his gates. All 19th century mod cons.

One of the chief things I was really keen to do while in this part of the North was visit Mount Stewart. Between mass and St. Patrick we spent longer in Downpatrick than we should have and we were a bit short of time for our trip to Mount Stewart. We took the ferry up from Portaferry which was lovely but a bit time consuming. 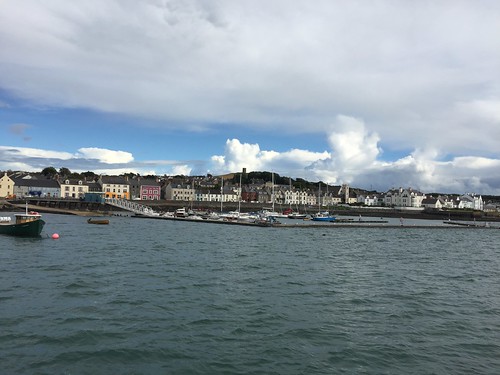 The main reason I wanted to go to Mount Stewart was that I read a really fascinating biography on Castlereagh (which I am thinking of re-reading after my visit) and I wanted to see where he was from. It did not disappoint. The gardens were lovely even though you would not think that autumn would be their best time; the house was fascinating and the guides very knowledgeable. There is a superb collection of portraits in the house including a lovely small picture of Hazel Lavery. I had not known that Sir John and Lady Lavery had been friends of the family but they were and frequently stayed in Mount Stewart. 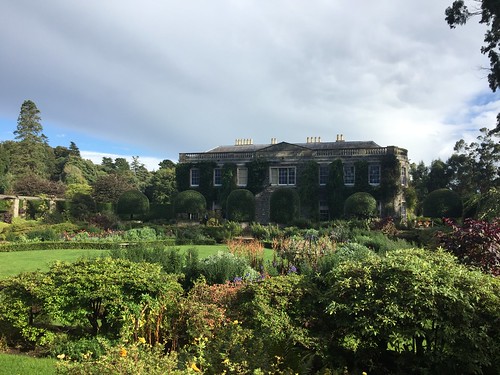 What is amazing is how almost entirely tourist free the whole area is; there were lots of locals out for the day but I could count on one hand the number of people from outside the area who were there and most of those were from the South so not very far outside.

We would have liked to stay longer but poor Mr. Waffle had a conference call at 6 and was beginning to get restive. We went back to our guest house and Mr. Waffle’s papers like the wind. Mr. Waffle’s phone had failed to charge and, with some reluctance, I gave him mine to make the call. I charged his a bit and went off for a solitary walk on the private beach. Mr. Waffle’s phone gave up as I tried to photograph the beautiful sunset over the Mourne mountains (visible at last). I was bitter and, as I pointed out to him, there was a rainbow too. 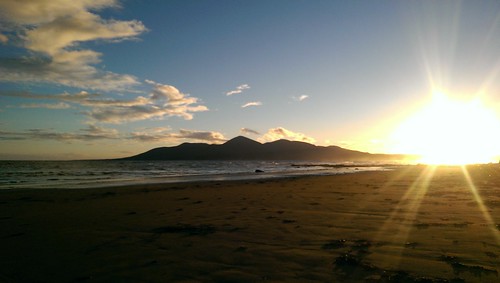 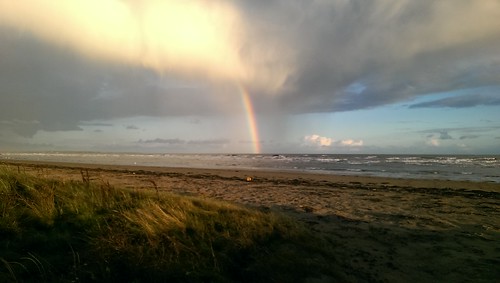 These photos are good but you should have seen it later as the sunset turned the sky pink. I will always have my memories as I, slightly huffily, informed my husband.

Dinner that evening in Dundrum in the Buck’s head was more successful than the previous evening’s offering and my mood gradually softened under the influence of the food and on the restoration to me of my beloved phone. Yes, I worry about me too, thanks for caring.

The next morning we visited Castle Ward which is quite weird. The husband and wife who built it couldn’t agree on an architectural style and it is Georgian on one side: 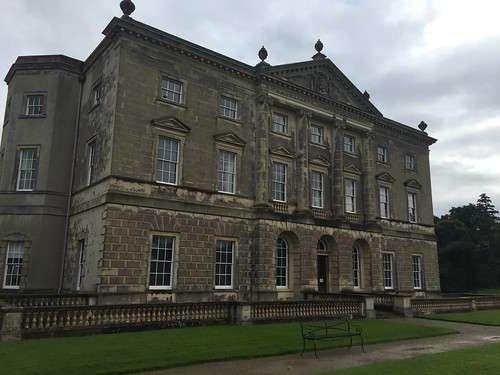 and gothic revival on the other: 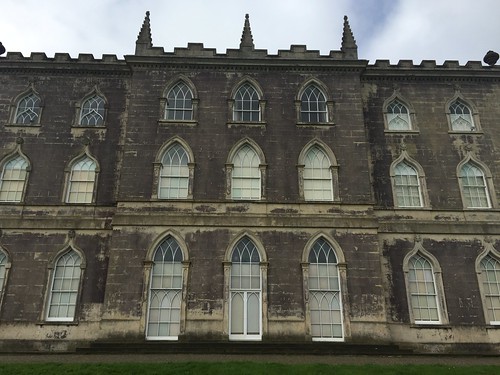 Sadly, it was closed on the Monday and we couldn’t get in, but I understand that the interior architectural mixture of styles reflects the external diversity. Definitely one to revisit. The set for Winterfell from “Game of Thrones” was in the grounds but not super-interesting unless, I suppose you are a big GoT fan.

We then visited a very impressive De Courcy castle with lovely views in Dundrum. This we had entirely to ourselves. 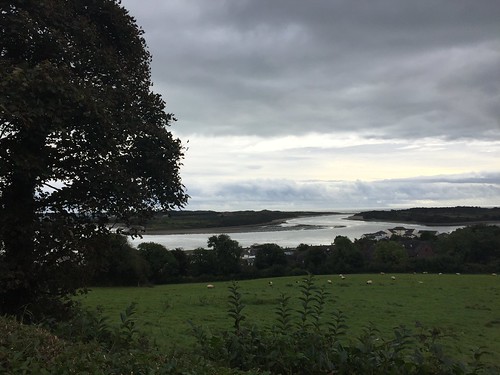 Then, Newcastle (which ought to be twinned with Catania for looming mountains, if for nothing else) for lunch and back home to our loving family. 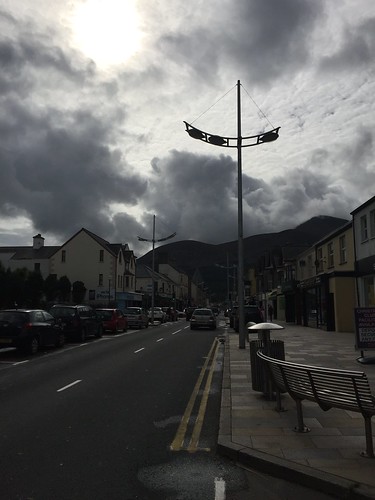 I intend to go back to Co. Down for another look although, I think, Fermanagh may be the next Northern county on my list. There’s a whole world up there.