Mr. Waffle had to spend all weekend working. In consequence, I found myself engaged in solo front line parenting. Yesterday morning, I took Dan to hurling and shouted encouragement from the sidelines (they enjoyed a very comprehensive victory, so much so that I and another mother who was watching felt very sorry for the opposition). Yesterday afternoon, the boys had a birthday party and I dropped them in and took herself for a cup of tea. Then back into town to collect the boys. I felt like I spent most of the day running children all over the city. Mr. Waffle made dinner though; so that was very welcome.

This morning began at 7 with Daniel getting sick – though, as he said, he made it to the toilet, so it could have been worse. Poor Mr. Waffle trekked off to a meeting at 9.30 and Daniel continued peaky. I realised about 11 that he wasn’t well enough to go to mass. And we had committed to herself doing a reading and some kind of special introduction for the first communicants (local primary prepping for May) at 11.30. In the end I sent her on her own. She was bitter and, as she pointed out she got to read one of my favourite readings; you know the one, St. Paul, “I have run my race to the finish..” If she was bitter, however, Michael was delighted. I briefly contemplated sending him along with his sister but it was too much. She would be up in the choir loft; he would be alone in the congregation staring moodily at the ceiling. I did not feel it would end well.

Mr. Waffle was restored to us at lunch time but, alas, further work beckoned so I took the children out. Herself wanted to go shopping alone so, with some trepidation, I took her to town and left her with her phone in a large shopping centre. If you are of a nervous disposition, I can reassure you that all went well and she managed to spend a large chunk of money in Tiger. Much of it was spent on candles and night lights. I am not sure a) how this reconciles with her love for Marie Kondo and b) whether I entirely approve of her room being turned into a fire hazard.

The boys and I went to the Science Gallery where there was an interesting, if depressing, exhibition on design and violence. It was not perhaps entirely suitable for 11 year olds but there were a number of them there; they weren’t allowed to undergo the virtual reality solitary confinement experience. Probably for the best. Michael, at my instigation, did sit on a metal chair. It’s a cube and is delivered with it’s own sledgehammer and you batter it into a chair shape. If you pay extra, they will pre-batter it for you. I was just asking Michael whether it was comfortable (unsurprisingly, it was not) when one of the staff bounded up and asked him politely, but anxiously, to get off the exhibit. Apparently, it cost €8,000 and they were not keen for people to try it out. High concept design but not practical, I would suggest. 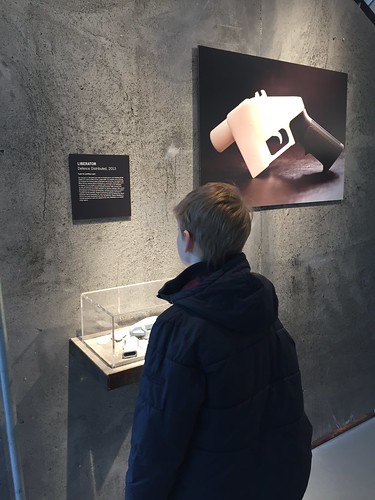 We went to the café where both boys dutifully looked at the list of words on the wall – semantics of violence, I understand. As one of the words was boycott, I insisted on explaining about Captain Boycott; they were not fascinated. Daniel had hot chocolate and a slice of biscuit cake (much recovered from 7am vomiting) but Michael did not like anything on the menu (a frequent occurrence) and commented, “I thought something like this would happen.” Then, with the air of a conjurer pulling a rabbit from a hat, he took a lollipop from his pocket which he proceeded to suck contentedly. Cheap date.

We then took ourselves off to the Natural History Museum which was busy but appealed in a mild way to both boys. In September, they had been to a session about TH Parke whose statute is in front of the museum, so they were able to fill me in on him. Interesting man.

You probably can’t make out the relief on the statute but Daniel informs me that our man is sucking out poison from the chest of one of the others on his expedition. 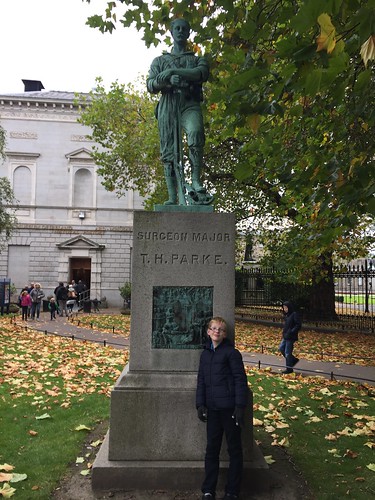 And then we all went home and poor Mr. Waffle had finally finished working. He spent an hour playing Betrayal at House on the Hill with the boys. This is a board game which the children love and Mr. Waffle and I loath so this was particularly noble. Now he is making dinner, like a saint, and tomorrow we are all back to work. Alas, alack.