I meet a group of former colleagues for lunch regularly. The median age of the group is 40ish and I am the oldest, at 47, and the youngest is 36. We met recently and I got there a bit late. As I arrived, one of them asked, “How old are you?” “Why do you ask?” I said. “We were speculating because you were late,” they replied. I told them. “Oh really, that old we thought you were younger, except for G, she guessed you were approaching 50.” I turned reproachfully to poor G, who said, defensively, “I only said that you were looking very well for someone in her late 40s.” I understand that there are three ages: young, middle aged and “you’re looking great”. Have I really entered the last phase?

One night at dinner, everyone was a bit cranky and Michael announced, “I sense tensions are high.” There was a dramatic pause and then he added: “I am the tension weatherman.” Every family should have one.

Herself: Did you hear about the punctuation mark that lost both parents?
Me: No.
Herself: It needed someone to act in loco parenthesis.
Me: Aargh.
Herself: I made it up myself.

I took this picture before I went into work the other morning. Observe, my noble bicycle carrying my handbag, both boys’ schoolbags and my briefcase. 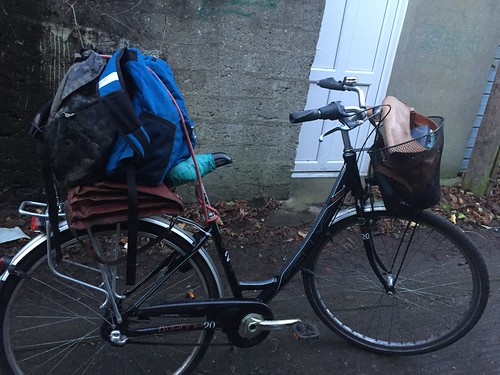 Herself, on being forced to go to mass on Sunday, announced, “I’m an atheist martyr.” It takes a saint to live with a martyr, you know. As part of her campaign to not go to mass any longer she is asking me hard questions. I am dealing with issues that I never really considered myself and where I have no answers. In the context of the Arian heresy (obscure, but not as obscure as you might think because every Sunday when we recite the Nicene creed we refer to Jesus as being “consubstantial with the Father” which I understand is the essence of the controversy. A former colleague of mine used to refer to the creed as “the best mission statement ever”; I digress), she asked me whether the Holy Spirit has chromosomes. On balance, I’m inclined to think not, but really, this is all getting a bit beyond me.

And as though all this wasn’t enough, the sacristan nabbed me at mass on Sunday and asked whether I would like to be part of the parish’s outreach team for baptisms. One evening a month only, apparently. I fear I will have to commit as I have already avoided all kinds of things including organising tea after the family mass once a month. I will offer it up, I suppose. There will be training available, I understand. I hope they will cover all the relevant theological questions which are likely to arise.

Our heating broke during a cold spell there recently. It worked upstairs but not downstairs. We poked ineffectually at the boiler and the radiators but, in the end, we had to get someone in. He had a look and pointed out that we had a thermostat on the wall downstairs which was currently set to zero and that might be the root of our problem.