So I booked myself a Covid test online even though I am double vaccinated. I was unnerved by my colleague (also double vaccinated) and his wife (ditto) getting sick. In fairness, to the HSE, it’s really easy to do. I’ve had to give far more data booking a restaurant.

Parents’ council is back. I tried very hard to step down from my role as treasurer at this meeting but failed.

I had my Covid test. The whole thing was stupendously efficient. I was in and out in 5 minutes. “Have you had one before?” asked the man with the cotton bud on a long stick. “No,” I said. “You’ve done well,” he said. I was slightly dreading it but after 18 months of constantly swabbing, they seem to have really refined the technique. It was a little ticklish but very fast and not painful.

We had salmon for dinner and I rescued my hollandaise from the freezer. It thawed beautifully. I was delighted with myself. I thought it might be nice if it was a bit warmer and plunged my plastic bowl of hollandaise into a pot boiling water because I am an idiot. Of course, it instantly split but I shoved in an ice cube and started beating frantically and it came back together. I felt like a cordon bleu genius. It was a bit cool mind when we put it on the fish but I’m definitely still counting this as a win.

Also my Covid test came back negative and I felt like a bit foolish for going at all. But still, nice to be reassured.

I drove herself out to a party. We passed a neighbour’s house dense in foliage. “Their creeper is out of control,” I said. “It’s more like a stalker at this point,” said herself. She’s hilarious. How will I manage when she is off in godless England? She pointed out that Ireland is pretty godless as well at this stage. Not the point.

I have to say that work continues to be demanding. I am exhausted from it. I arrived home to a surprise from Mr. Waffle who had been in a bookshop and picked me up two books as a present in view of my general exhaustion. God, I was thrilled. Is there anything better than an unexpected present?

It was lashing. I regretted my choice of an outdoor play for our evening’s entertainment. It was culture night and we booked ourselves into Milano’s for a festive start to the evening. Daniel hurt his shoulder so instead of cycling in as we would normally do, we took the car. There must be some kind of mathematical relationship between how smug a cyclist you are and how awful things will be when you drive, because it took us 40 traffic choked minutes to get into town and find parking. Herself who was travelling under her own steam took 10 minutes to cycle in.

On the plus side, the weather cleared up. We could only book in pods of four for the play. I offered not to go but that was unnecessary as there was an unseemly clamour among the children to be the one who would not go to the play. Herself won.

It was in the grounds of Dublin Castle. The Castle was busy for culture night and, as always, it was nice to be herded off into a blocked off area where something exciting was happening. 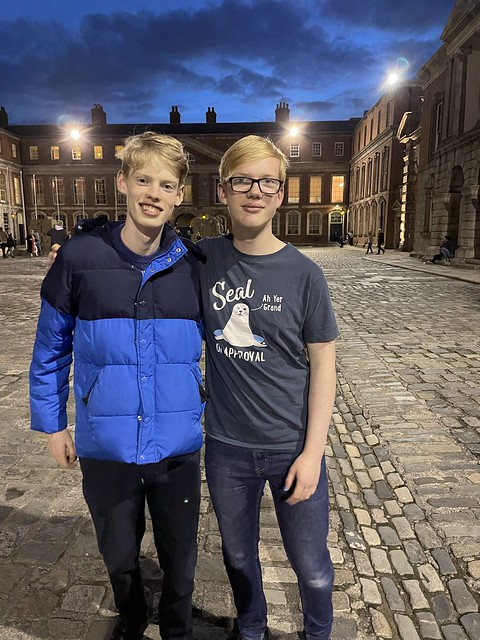 There were picnic tables for each pod to sit at and it worked quite well. We had to keep our masks on for the duration which seemed a bit excessive as we were outdoors. I was very relieved that there were seats though as I had been worried we might have to stand. The setting was lovely. 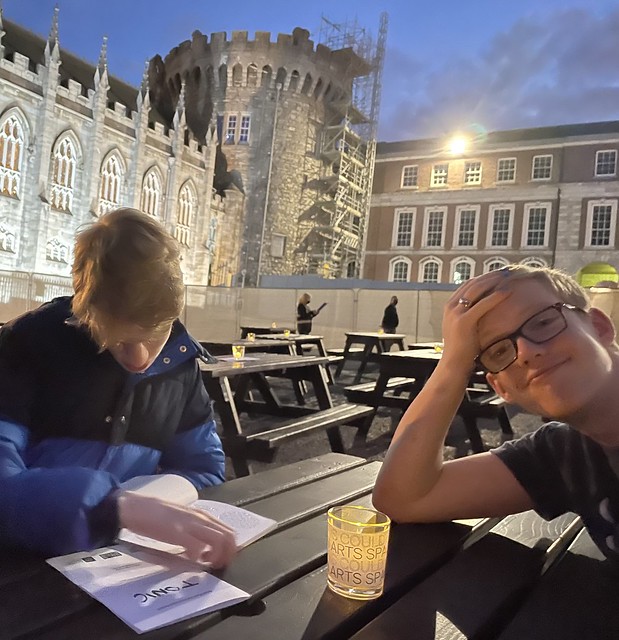 Someone started waving from a table behind us. It was the woman who did French language conversation with the children (alas, she is leaving us this year). Then someone called my name from the table directly behind us – it was some friends from book club. We did more in person socialising before the start of the performance than we have done in 18 months. Thrilled.

The play itself was fine. It was a musical, heavy on folk music. Michael actively liked it and, as ever, indifferent to the views of others, leapt up at the end and gave a standing ovation. Michael loves a standing ovation. It was good to be out. I am going to chalk it up as one of my successes.

On our way back to the car, we passed by Christchurch. I said to the boys, “What church is that?” “We know, we know,” said Michael, “Christchurch where they keep Fintan O’Toole’s heart.” Look, close enough.

Herself has gone to Cork to say farewell to the Cork relatives before emigrating. My sister bought her new boots in Cork. I cannot speak about the outrageous expense of this. Knee high boots from Carl Scarpa bought at full price in September. What an excellent aunt.

I made more apple jelly and stuck the posters I got at the Fringe festival on my jam jars. I mean, what else am I to do with them? I now have trendy preserves. I have to confess that it’s a bit unlikely my jar of plum jam actually could be an art space but I am spreading the message.

I stuck up posters around the place looking for a new person to do French conversation with the boys. I felt very old, sticking up posters rather than going online. We will see what comes of it.

I, very cravenly, resigned from the parents’ council treasurer role by texting the group chat. I think I have achieved escape velocity.

Mr. Waffle and I cycled to Chapelizod, then we went and looked at the art in the Irish Museum of Modern Art. I’m not sure I am able for it. It’s been open 30 years and they had a poster on the wall showing all their exhibitions from 1991. The only one I can remember is this one. The little man bangs his head on the bell at one point and it made a very memorable ding. Of the rest, alas, absolutely no memory remains. 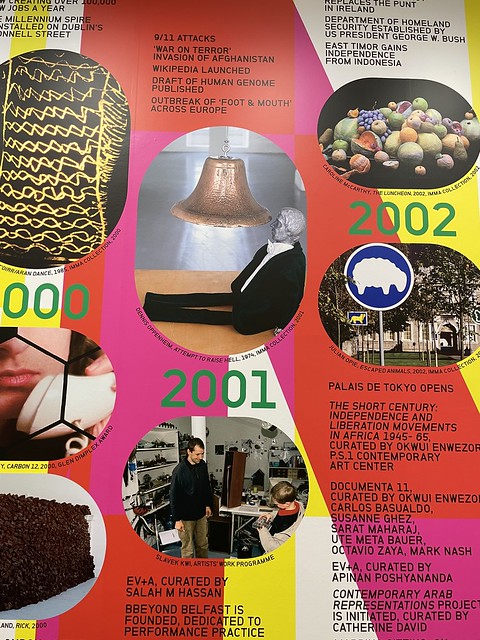 I quite liked some slightly weird portraits by an artist called Alice Maher but doubtless I will forget all about them like everything else I have ever seen there.

We went for a restorative cup of tea afterwards.

Meanwhile herself went to Dungarvan with her uncle where they were due to cycle 70kms. I await hearing about developments. Last update was at 4.30 when her uncle said, “Finally stopped for lunch after two punctures and numerous setbacks. Turns out herself isn’t that keen on 4.30 lunch either Anne [I refer you to my last lunch date with my brother], must run in the family, that plus being continually exhorted to admire the views of the UNESCO geothermal copper coast has resulted in the a less than happy [girl] but she has been stoic.”

Not sure how much of their 70kms they achieved but at least she’s fed. 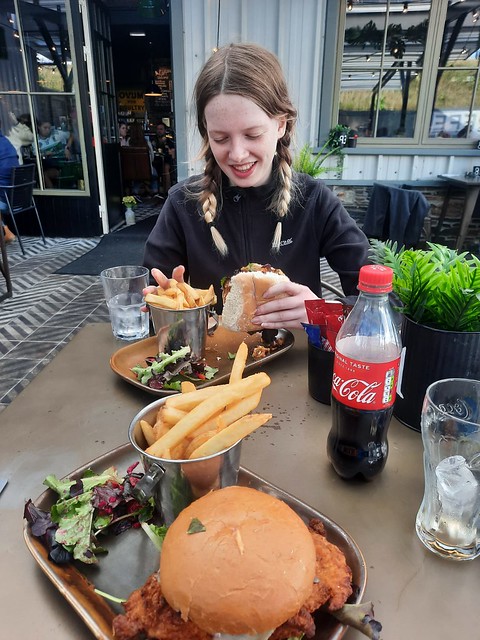 And that’s it for another exciting week.

At this point I am still trying to put off the work I brought home and did not do all weekend. I also have to do the parents’ council accounts before the AGM tomorrow night when (be still my beating heart) I will step down from the role. Oh Sunday night delights.

*Will Phil Collins ever become fashionable do you think? Will the young people some day love him unironically like they do Dolly Parton?