I’m back to work tomorrow after what feels like a very long break. Am I looking forward to it? I am not.

Over the past week, Mr. Waffle and I have sampled a range of Dublin eateries for breakfast/brunch, which has been hugely enjoyable. However, if I get Covid, it will definitely be from the Elephant and Castle in Temple Bar. It’s not that they weren’t observing all of the requirements but it was the fullest place we’ve been in months.

So, I do not currently have Covid. However, Covid is rampant here. My brother-in-law and his wife have it – baffled as to where they could have got it. My brother is at home self-isolating as a close contact of some randomer in Spain (regular readers will recall that he was in Tenerife for Christmas). I am a bit amazed that the systems talk to each other and impressed. He’s not delighted.

I went to visit my mother’s friend from college whose husband died in August. Two of her sons live abroad with their families and couldn’t easily come home due to Covid. She and her son who lives at home had been going to host her other Dublin based son and his wife and children for Christmas Day. However, you guessed it, the son, his wife and children all came down with Covid so it was just my mother’s friend and her son who lives at home for Christmas Day. He had a really bad reaction to his Moderna booster and spent Christmas evening throwing up so it was not exactly a peaceful and joyful day as hoped.

My friend who lives in America came home with her husband and four children. There was a problem with two of the children’s passports and her husband had to stay behind with them to sort with the American embassy while my friend went home with the younger children. This is not exactly a Covid story but, of course, everything was made much more complex by having to source a Covid test (when the public system had basically given up putting additional stress on private testing) after they had solved their passport difficulties.

We went on a number of cutural outings. Somewhat satisfactory. There was an exhibition in Dublin castle on photography in Ireland from 1839. Look, ok, it was put on by the photography bit of the National Library but a bit more on the subjects of the photographs as well as full details on the photographers and their techniques wouldn’t have been any harm.

As a Trinity graduate, Mr. Waffle can get in to the Book of Kells free and bring a couple of guests. This is a genuine graduate perk, I have to concede. When he and I visited we were told that now you have to book in advance to get the graduate perk. “Will we just go in anyway?” I said to Mr. Waffle. “How much is it?” I asked the woman on security. €18 a head! We did not just go in anyway. 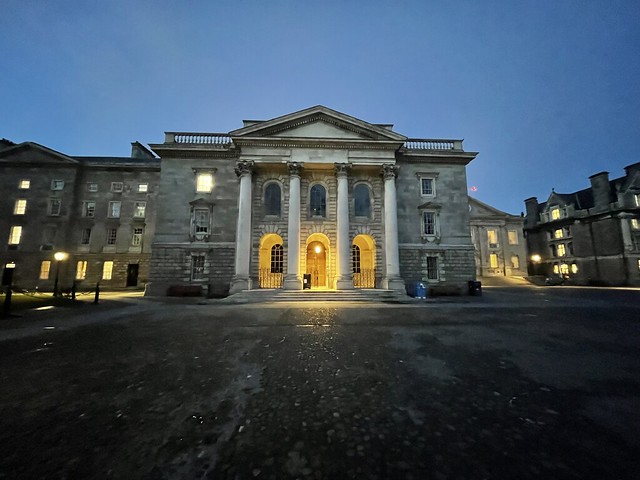 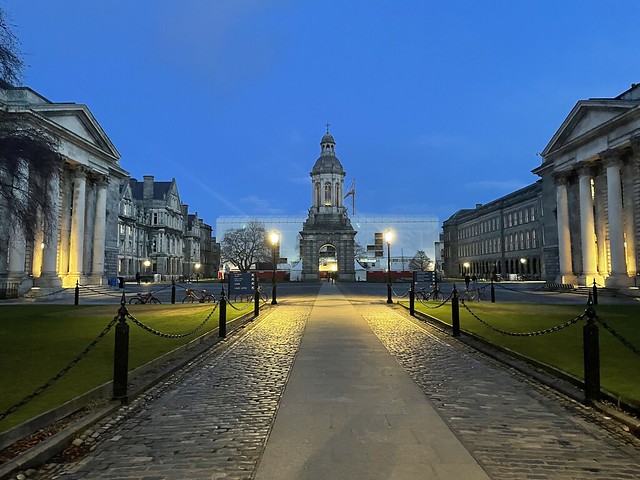 In other cultural excitements, I decided to go to the annual Turner exhibition in the National Gallery but there was a big queue so I was put off. Instead, I decided I would finally cash in the gallery membership I got last Christmas (2020 – I was waiting for Covid to be over so I could get full value for my annual membership, I’m tired of waiting) and go into the (cost-free to members) Jack Yeats exhibition. Was there anyone in the whole gallery who could assist me in redeeming my membership? There was not. Apparently I can ring any morning. Well, that’s helpful. A job for next week. I had a wander around the free stuff but my absence of membership gnawed at my frugal bargain-loving soul and I couldn’t enjoy it properly thinking I ought to be in the Jack Yeats exhibition for free. 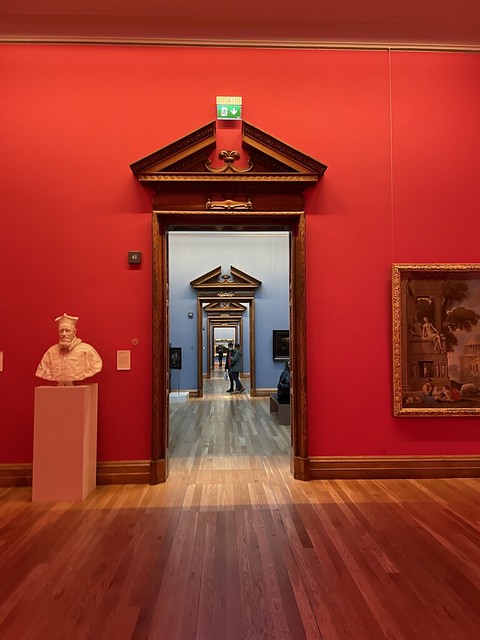 We went on a couple of successful walks. Out to Howth Head early on Wednesday morning with Daniel and Michael. When Daniel saw the Summit car park he said, “Oh God not here.” This was not exactly propitious but it was a beautiful day and we had the walk largely to ourselves and, I think, despite himself, he didn’t hate it. We had lunch in Howth and were home by early afternoon filled with inner smugness (in fairness, that was probably just me). 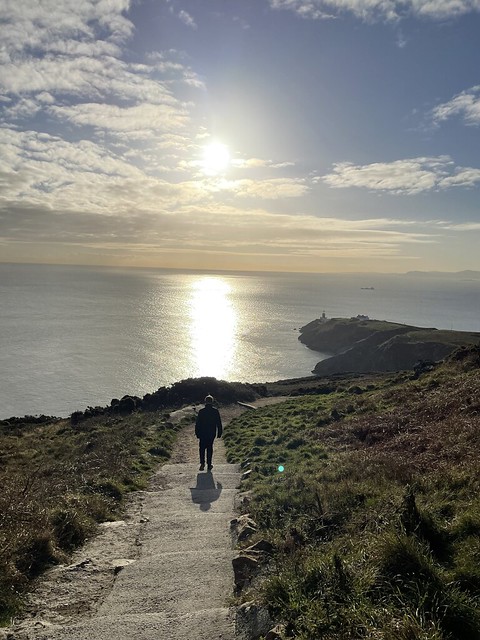 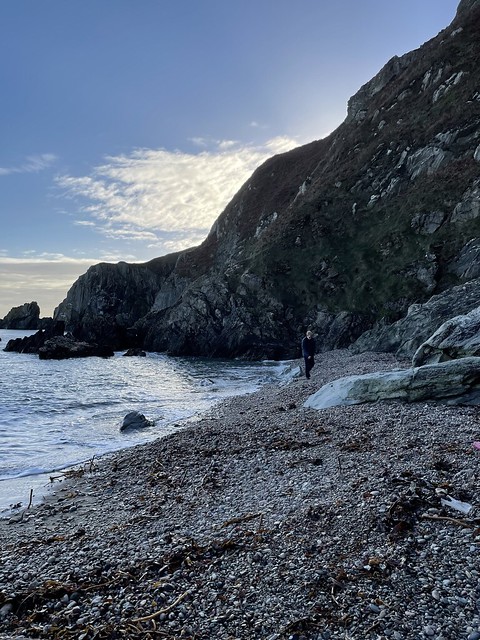 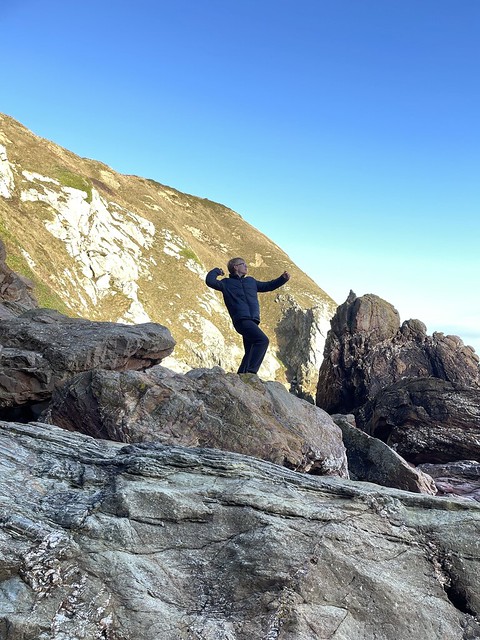 On Wednesday night, we had a farewell dinner. I went all out on the Christmas ware which none of the menfolk appreciate at all. Their loss but it was nice to have herself defending it, even if it does make the cupboards a bit full for December (conceded). 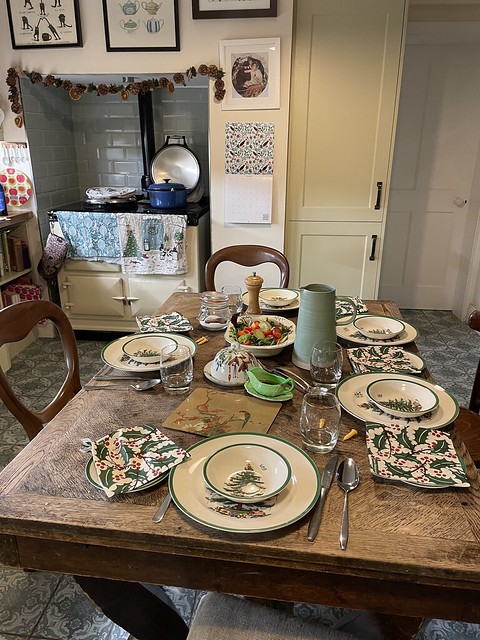 Thursday was Women’s Christmas. The Wise Men completed their epic journey from the far side of the hand sanitiser on the hall table. 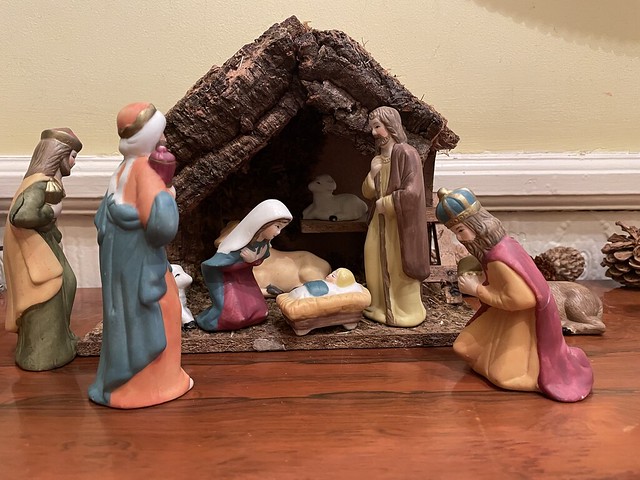 The boys went back to school. Herself went back to England. We drove her to the airport. “Did you see my whatsapp message about how hilarious it is to google “askew”?” I asked. “Yes,” she said tartly, “but I knew about it already because I have been on the internet since 2007.” Notwithstanding her very recent reminder of how keeping your parents young can be a brutal process, I was so gutted to see her go. It’s just really sad seeing a child off at the airport and I know it’s great that she’s having such a good time and loving it and the alternative would be much worse but I am heart broken. Seeing the light flooding into her bedroom every morning because the curtains are open gives me a pang and reminds me that she’s gone, probably for good. For the very first time, I am wondering what it was like for my mother when I moved abroad at 23 – and basically was gone forever. In fairness, herself is only 18 which seems so young notwithstanding her extraordinary competence at managing everything. I completely forgot to slip her any money at the airport which was something my mother did for me without fail. Happily her father remembered and had cash to hand so that she could sustain herself on her epic trek. 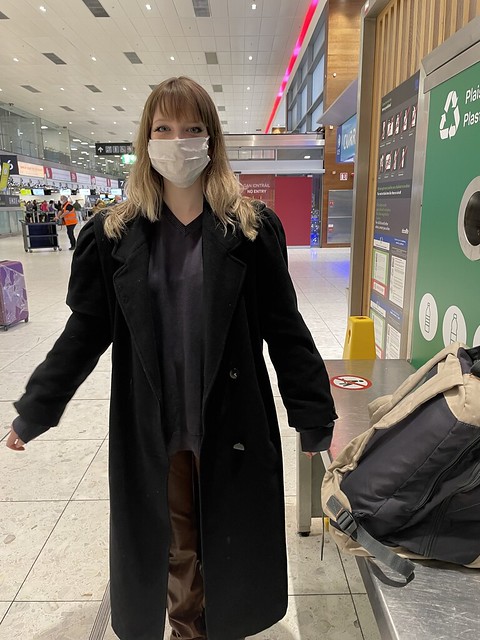 Mr. Waffle and I drove away from the airport in lashing rain. I had decided to go for a walk in Carlingford to cheer us up but as we drove there in the downpour I did wonder about the wisdom of that. Miraculously the weather cleared as we arrived and stayed fine while we had our walk. 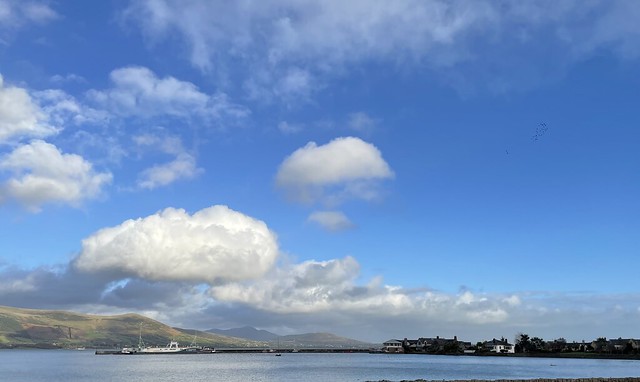 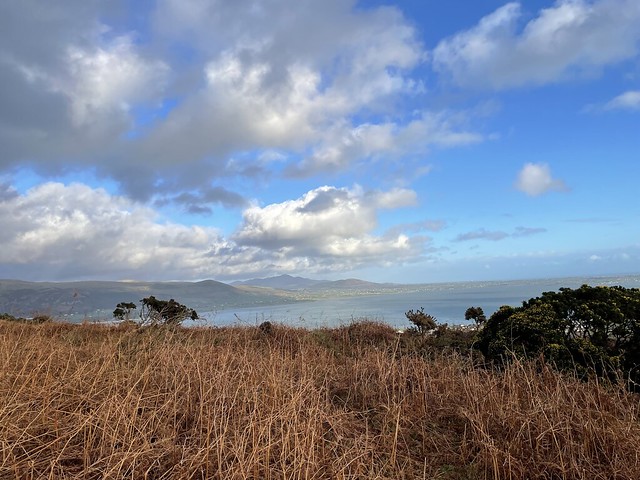 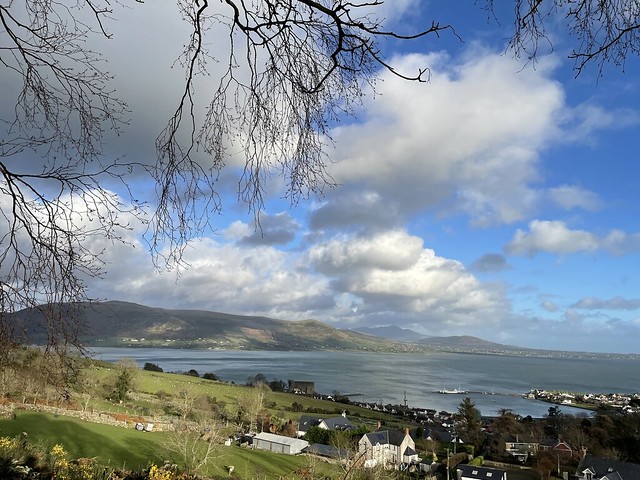 Then it started to lash again. We went off to a nice lunch spot which we had found on our recon mission during the summer. A pretty successful day out.

When we returned to Dublin, the boys debriefed us on school. They said it was largely empty as half the children and many of the teachers were out with Covid or were close contacts of Covid sufferers. God, I really hope they don’t close the schools.

On Friday morning, Mr. Waffle and I went to a friend’s father’s funeral. It’s the biggest funeral I’ve been to since Covid. The back doors of the church were left open (Covid, I assume) and the sleet blew straight in and down the back of my neck between my scarf and collar no matter how tightly I wound my scarf. I have never been so cold at a funeral mass. They must have been perished at the graveyard afterwards although it can’t have been a great deal colder than the back of the church. The mass was lovely, if chilly. A relative was an organist and they had pieces from Fauré’s requiem. An outstanding funeral music performance (although a friend did tell me about a funeral he went to where they had a choir and string quartet – which I’m sure was excellent – upping the ante even in death). The speeches (several) were very good, particularly a granddaughter who gave a real feel for what the dead man had been like to her and her cousins (lovely, obviously). I ran into a friend – it turned out she was there in her professional capacity as president of an important national body where the dead man had been advisor to the finance committee. I tell you what, it’s weird to be part of the middle aged, middle class establishment. Where have all the grown ups gone? Dead and buried apparently.

We went home and Mr. Waffle worked for the afternoon and the boys and I took down all the Christmas decorations. What a melancholy end to the holidays. January is going to be grim, I fear, but I’ve decided we will all – Covid permitting – visit herself in England during mid-term in February. She and her brothers are, if not delighted, at least resigned. 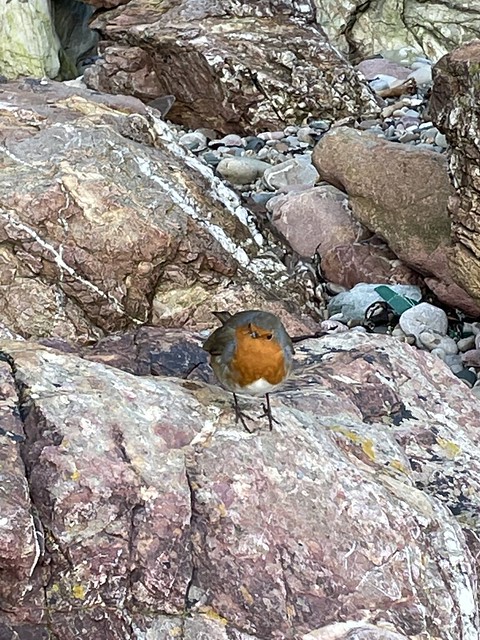