On St. Patrick’s Day, I decided that we would all go for a walk. This was greeted with varying levels of enthusiasm (ranging from very little to none at all) but I was adamant. We set off with our picnic at 11.30. By 12.30 we were still not out of Dublin having to skirt the parade route. After that we drove down to Wicklow relatively easily until we came to Glendalough, but it was still 1.30 by the time we arrived.

I thought that we would have the place to ourselves. It turns out not. Every Mammy in Ireland appeared to have had the same idea as me and the place was teeming with families out for grudging walks. Both car parks were full and we had to park on the road and walk for half an hour before we got to our starting point which wasn’t great. It was about this point that Michael and I discovered that we had had a fundamental misunderstanding about the St. Patrick’s Day parade in Dublin. I thought he didn’t want to go. He thought we would be going later. We would not be going later. Cue unhappiness. 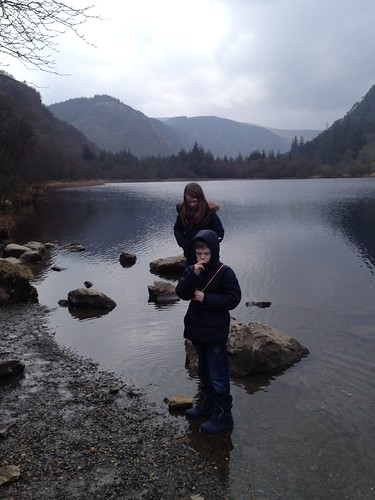 We went up to the Spink. It offers a lovely view of the upper lake but it is a bit of a slog up. The children did not enjoy it. There were bitter complaints on the way up. We passed a young child of about 5 coming down when I knew we were very near the top and to encourage the boys, I asked her, “Are we near the top?” and, perfidious child, she replied, “No, it’s ages away, although the views are lovely.” Daniel muttered mutinously, “The only view I like is the one of my x-box.” We did finally get to the top and there were nice views. 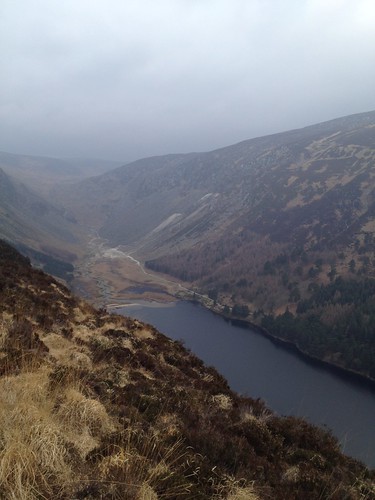 I knew that I would be pushing my luck to actually do any walking along the top so, to the children’s huge delight I said we could go back and they went careering back down, leaving Mr. Waffle and me to plod in their wake. As they were sitting waiting for us at the bottom, they ran into some of their classmates who were also on a forced St. Patrick’s Day march.

The next day, I met the classmates on the walk into school and asked how they had enjoyed their trip to Glendalough. “Worst day ever!” announced the younger bitterly.

It is good to know that I am not alone.