As part of my ongoing love affair with Northern Ireland I booked us into an Airbnb in Newcastle, Co. Down for St. Patrick’s weekend. This was a matter of much bitterness as Michael was due to have his end of term drama show that weekend; Daniel wanted to go to Gamercon; I had promised Michael that we would go to the parade in Dublin this year (I had, but I had forgotten, I am but human); herself had to appear weird to her schoolmates by not being able to go to the parade like everyone else and going to Northern Ireland instead; and Mr. Waffle had to fly out to a meeting on the Monday morning. So not the advance enthusiasm that I had been hoping for.

The drive up on Thursday night was tetchy – I had been hoping to get out of the office early but a variety of bank holiday weekend deadlines conspired to make me stay until 5.30. Google maps told me it was only 99kms to Newcastle from Dublin. Unbeknownst to me, Google maps changes from kilometres to miles automatically when you are travelling to a destination that operates in miles. Let me tell you, 99 miles is quite a bit further than 99kms. Also I had booked us in to a pizza restaurant in Newcastle for 8 and, although they were very accommodating, Mr. Waffle did not relish ringing them to tell them we would be late. Our Airbnb hostess was very obliging though (first experience of booking – would definitely recommend it, surprisingly pain free) and said she would turn up with the keys whenever we arrived which she did.

The house was absolutely fine – not beautiful but central, good value and lots of room for the five of us. The temperature was set to what my friend from the North calls “Ulster Granny” and that’s the way I like it. We awoke on St. Patrick’s Day to driving rain. We walked into mass in the town. The catholic church is quite spectacularly ugly. “They have a place like that in Liverpool,” said Mr. Waffle, “they call it Paddy’s Wigwam.” I sniggered and herself said I was the victim of internalised racism so there you go. Mass was extraordinary. They had Irish dancers (not a feature of mass in general), the flag of the local GAA club was laid on the altar and the first and second readings were both in Irish as well as a good sprinkling of the hymns. Utterly baffling to a majority of the local population, I imagine, as they don’t generally study Irish in school and there is only so much night classes can do (Conradh na Gaeilge were having a collection outside the church, presumably for more of the same). It was strange. The kind of gear that is very standard for St. Patrick’s day in the South like green, white and orange ribbons in girls’ hair is, of course, utterly different in the North. I seem to remember sporting ribbons of this nature myself in Cork in the 70s – my mother was a big fan of the large ribbon – but it meant nothing more than St. Patrick’s Day. Flags in the North are, of course, a completely different matter.

We went to the playground after mass and looked at the mountains of Mourne sweeping down to the sea. 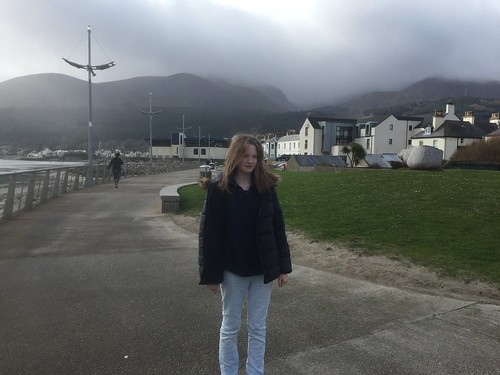 There was a great claw sculpture which provided some harmless entertainment. 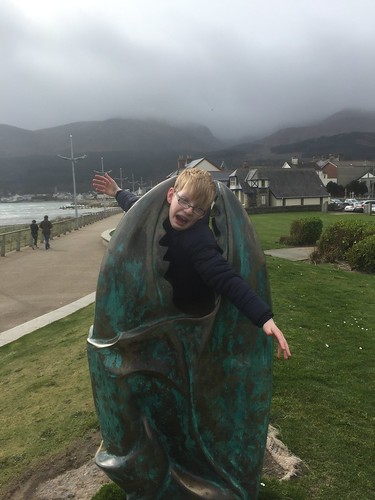 Michael fell off the climbing frame in the playground onto his head and was deeply unhappy and, possibly, concussed. We went for tea. In what can only be called a stroke of genius on my part, I asked a local with two small children where he would recommend for this. He recommended “Café Maud’s”. The outside was, frankly, unprepossessing but within lay everything that a family with three damp children (one possibly concussed) might require. It was the business. Suitably fortified, we went to the tourist office. I had already rung them earlier in the morning to check whether they were open. When I went in, one of the women behind the desk said to the other, “I think this must be the lady who called me this morning.” I confirmed that I was. I don’t think that they are overwhelmed with tourists – I didn’t hear a single non-local accent while we were there except for the Turkish owner of the pizzeria (I asked him about parades in Newcastle and he was baffled but the locals sitting beside us scooted up to us and saying “I couldn’t help overhearing your question..” gave us the lowdown) and the Polish waitress in Maud’s – and I suppose that might be why they are particularly nice to them. The women in the tourist office got out the range of brochures and started talking about various options including Irish dancing. “Mmm,” said I, “I had some of that already at mass this morning.” The older lady behind the counter said, “I was there too, wasn’t it the oddest thing?” Mr. Waffle who had been at the far end of the premises drifted up to hear us exchanging very satisfactory animadversions on the morning’s service. “How,” he hissed, “did you end up talking about mass? Did you bring it up?”

Given that it was still lashing, we decided to take the advice of the women in the tourist office and go in to Downpatrick for the parade. We stopped off on the way to have a look at Dundrum castle which we had to ourselves and which is far, far more impressive than you might think from looking at my photos. 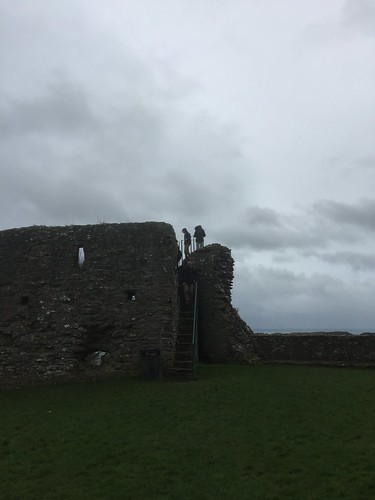 We decided to take advantage of the municipal park and ride in Downpatrick. Frankly, this was a bit unnecessary but, never mind, we got to marvel anew at the infrastructure in the North. Not only did they supply a park and ride for a small town but there were half a dozen portaloos in the car park. I can only commend Northern Ireland’s dedication to clean and plentiful public toilets and note that her citizens must get a rude awakening when they travel south of the border.

On the way into the town we passed a very depressed and damp bouncy castle which the kids were quite keen to try out but we resisted. I have seldom seen something less appealing.

Mine eyes have seen the abomination of desolation: 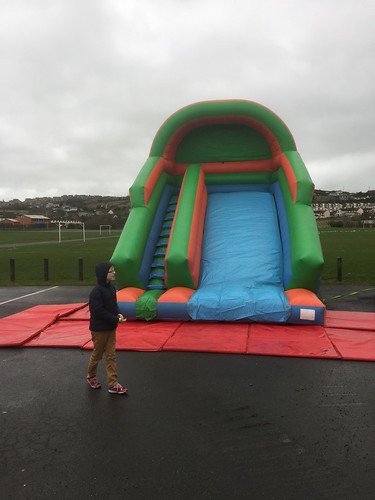 We had lunch in the town. We went to the St. Patrick’s exhibition which the children found mildly entertaining. There was this rather sad sign in the shop: 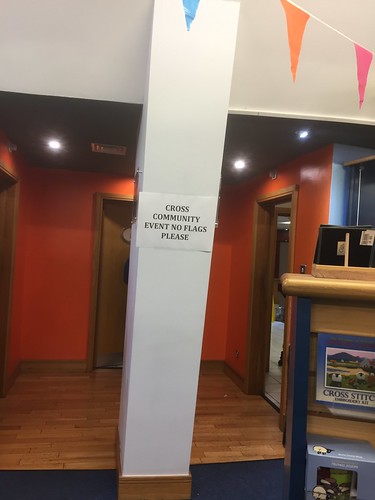 It appeared to be completely ignored by the local teenagers who were all wrapped in tricolours.

We actually managed to miss the parade as the children went to a free F1 experience which was undoubtedly the highlight of their day. 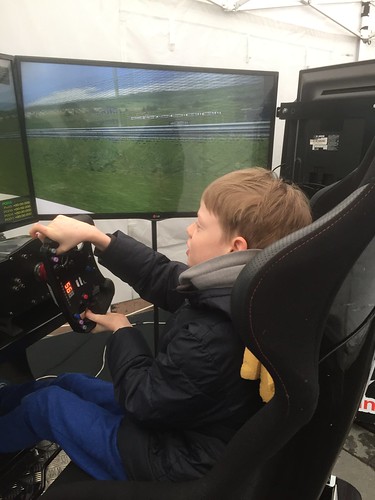 Herself got to experience again Northern Ireland’s contribution to the ice cream world of which she is very fond. Yes, indeed, it was time for the Pear Picking Porky (as you can probably tell, she enjoyed posing for this photo, ahem): 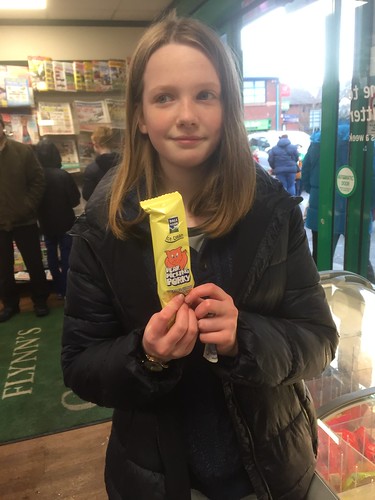 Then it was off to the county museum (formerly prison) for organised fun which Daniel actually really enjoyed – storytelling and performances – and the others thought was not bad. It was a small little museum but for a local small town offering, really pretty good, I thought. They had a display of postcards for the day that was in it: 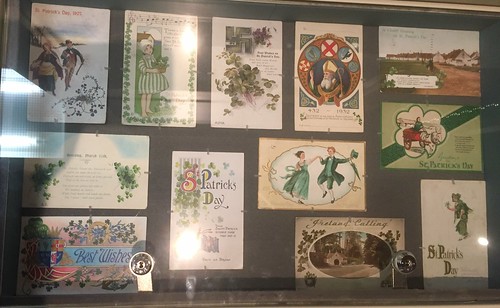 There was an elderly gentleman with a carousel and he, Michael and herself had a lengthy conversation on Roman emperors. It was odd but they all seemed to enjoy it. We went to the gift shop and the boys bought a wooden sword and shield and a game involving knocking over cardboard cut-outs with rubber bands. The man in the shop gave us 20% off and threw in a free book on early Christianity in Co. Down. Again, I think they are unused to tourists.

The boys and I went to visit St. Patrick’s grave up at the cathedral. He shares a grave with Bridget and Columbanus and I noticed that the Knights of Columbanus has left a wreath in case their lad might have felt left out. 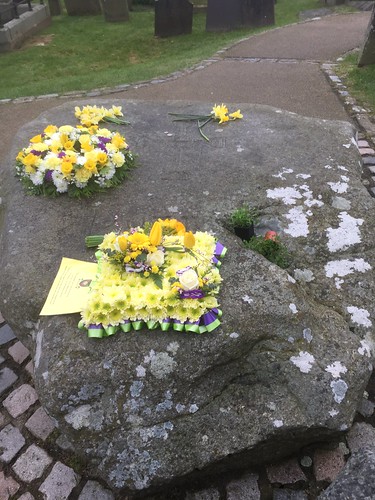 Herself poses with hexagonal Penfold postbox – very rare – a range of signposts and Downpatrick Cathedral. Yes, this is how we get our kicks, your point? 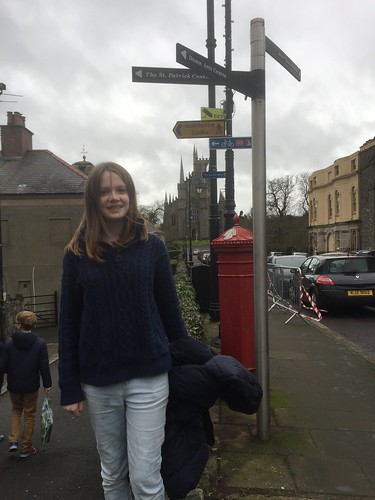 Sadly, when we got back to our Airbnb, the heating had gone down, cue much frantic texting and an early night. On the definite plus side, herself and Daniel made dinner while their aged parents and possibly concussed brother relaxed in the, definitely chilly, front room.

People, this is only day 1, we stayed until Sunday. Stay tuned.

*An American economist said Northern Ireland was underrated on his blog recently. I thought it was true.