The 50ish has a lovely house. The mid-30s person is wisely biding her time. The rest of us? Wrong place at the wrong time/reckless investors. Take your pick. Choose tactfully.

Michael is still loving the scouts. He had his investiture on Monday night when he got his first neckerchief (?) and woggle (?) and he is filled with pride. He had to learn off the scout promise in advance but, as he told the scout leader, it presented no problems to one who had mastered Lepanto.

However, Michael has drawn the line at going away camping for the Whit weekend. He was keen until he discovered that they were going away for three days and had to eat mashed potato. Maybe next year, he feels.

Meanwhile his sister who attended Monday night’s investiture expressed an interest in joining the scouts also (only partially motivated by the useful skills she could learn for the zombie apocalypse). We spoke to the scout leader and he said that she could come on Tuesday. She went last night to an older group and loved it too. I am very impressed by the organisational skills of the scouts and their ability to keep large groups of children entertained for many hours.

Her: I was reading about the changing face of Sweden today.
Mr. Waffle and me: What?
Her: Well, it was all that was left in the school library* that I hadn’t read.
Me: Really, you’ve read everything else?
Her: Well, no, it was either that or the Donald Duck archaeology book.

*This, regrettably, means a largish bookshelf in her classroom rather than a room full of books.

Herself got to do the second reading at mass on Sunday. Regrettably, we had become blasé and she only looked at the text at the last minute. It contained a number of words she had not previously encountered and of whose meanings she was unsure.

So we found ourselves saying as we walked up the road to mass, “That’s pronounced to rhyme with porgy,hard g as in gin, yes, f*rnication, it’s pronounced as spelt.” I would list all the relevant words but I fear that, even suitably asterisked, they would attract a rough crowd to a family blog. As Mr. Waffle remarked, “The Galatians must have said, ‘It’s another letter from Paul lads, everybody sit down.'” If you are curious, it’s Galatians 5:16-25.

The Princess was confirmed yesterday. It all went reasonably well. My aunt, my brother and sister came from Cork. My aunt stayed in the B&B around the corner. It looks lovely from the outside but after she arrived I went to check her bedroom with her and, regrettably, it was vile. Absolutely tiny and utterly unappealing in every way. It was also pretty pricy so that was definitely a minus. However, my aunt nobly assured us that it was fine and said that she slept like a log. My aunt fills me with hope for our old age. She will be 86 next month and she is well in every way. She joined a swimming club recently and told them that she was 75 in case they didn’t want her due to her age and they totally believed her. Utterly reasonably. She is in fantastic shape. She attributes her good health to a lifetime of inertia and overeating so I feel my chances for a healthy old age are good also.

The morning of the ceremony was a bit frantic. I had underestimated how long it would take to ferry two carloads of people to the church. The first carload arrived at 10.40 instead of the required 10.30 and the second carload containing the Princess’s sponsor (my brother), her brothers and her mother arrived well after the 11 scheduled start time. We were nearly later because as my brother and I were talking about the marriage referendum, Daniel was inspired to make his position clear and wrote in large letters in highlighter on his arm, “Vote YES”. While I applauded this at one level (“I thought you would be happy,” said he), it didn’t add to his allure as he headed off to his sister’s confirmation in his short sleeved shirt. Spit and rubbing ameliorated the situation but he looked distinctly orange.

When we arrived, the service had already started and while the boys could sit at the back of the church with other relatives, parents and sponsors were right up the front. Herself was at the lectern about to begin her second reading. Mercifully I didn’t miss her. And she was terrific, I was very proud though somewhat mortified by my late entrance. As Mr. Waffle tactlessly said later to Herself, “I presume you saw your mother coming in, you could hardly have missed her, arriving late and coming up the aisle in her red dress as you were about to do your reading.” Sigh.

Lunch went well and then we deposited various relatives to buses, trains and their homes. Then, I went out to vote with the children in attendance and collapsed. I developed a spectacular migraine and I still feel a little delicate. It is to this, the Confirmation excitement generally and Mr. Waffle’s recent hectic travel schedule that I attribute a severe oversight this morning. We are normally very reliable as a family, if you want reliability, look to the Waffles. As I was driving Danny home from a GAA match in North County Dublin (a massacre, thanks for asking) I noticed a church car park full to overflowing, “There must be a communion on,” I remarked to him. Then it hit me, Herself was supposed to be singing in the school choir for the First Communion that morning. We frantically rang home. Had they by any chance remembered? They had not. Was the Communion service now over? It was. Did she have a solo? Several. Am I looking forward to going into school on Monday morning and grovelling before the choir director? I am not.

So this post is a little late but I’ve been busy.

The thing that I find most delightful at the moment is how kind she is. I was out in the garden, pulling up weeds the other day and she unloaded the dishwasher without being asked. Her father was away and she went downstairs early and made sandwiches for school for everyone. She likes to make her parents happy. In my case, that often involves tea in a china cup. She is also a great baker. So sometimes there is cake as well. She makes the best cakes. 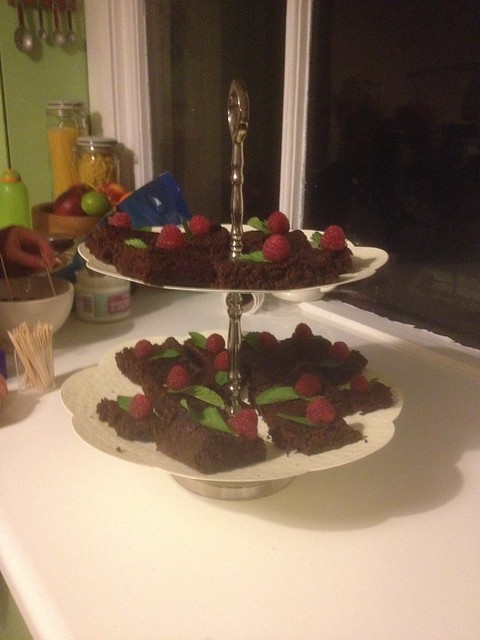 She loves animals including our cat.. 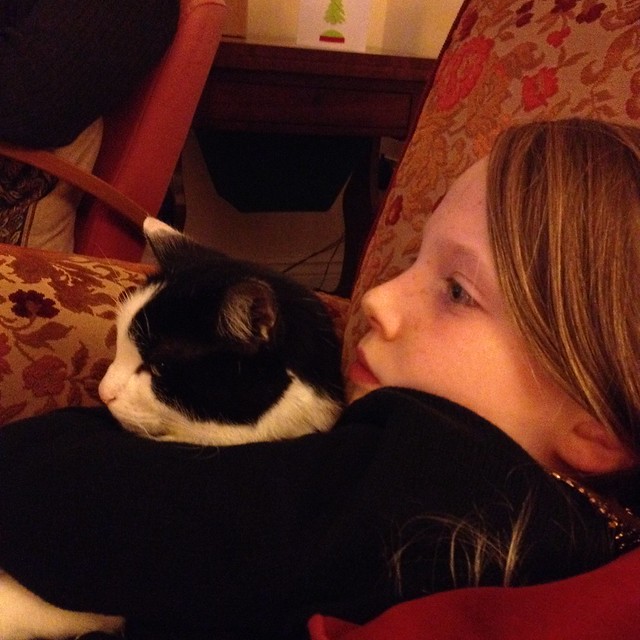 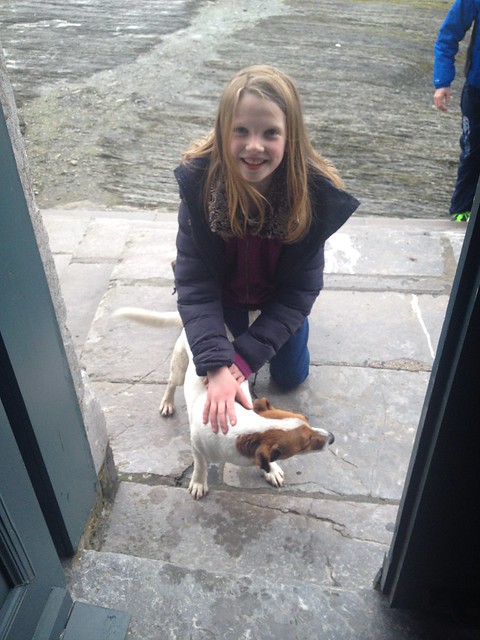 She is very like I am now. Not very much, I think like I was when I was 12. We like the same things. I worry a little bit that I am dragging her to very dull museums but she seems to like them or else she is very indulgent.

She knows lots and she reads lots, so it is a virtuous circle but it can make her a bit smart. Sample, the other night as she was curled up on a chair trying to read in peace, I came up distracting her which she didn’t entirely welcome.

Me: “No man is an island/Entire of itself”
Her: John Donne, metaphysical poet, your point? 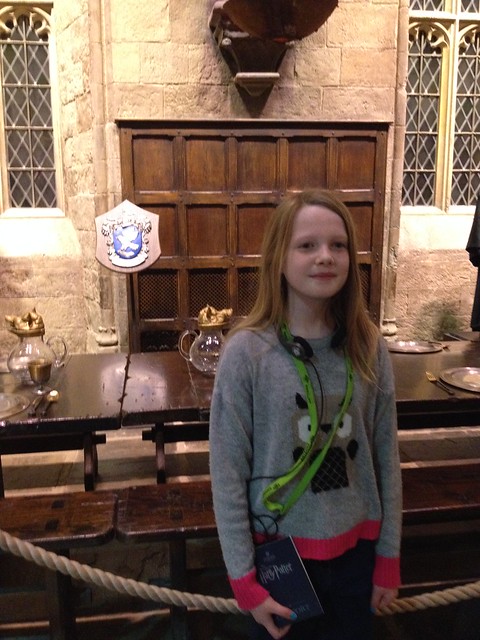 She is busy preparing herself for secondary school which starts in the autumn. She has decided to study German and is busy teaching herself with Duolingo. She has made a surprising amount of progress in a week. She has more time to dedicate to it than I do but it is nonetheless unwelcome that she is a couple of lessons ahead of me considering that I actually studied German for five years in school and was once reasonably good at it.

She and I cycled all around town last weekend (Marsh’s library, The Little Museum of Dublin and the Science Gallery) and while I was a little nervous from time to time, her cycling and her traffic sense have really improved so I think she will be cycling to her new school come September.

I will really miss her on the walk to primary school in the morning. At the moment the boys tend to walk together and talk about their interests (Skyrim, Minecraft) and she and I talk about whatever we fancy. Between 23 (maximum velocity) and 28 (left home early) lovely minutes.

She may be acquiring the rudiments of tidiness. I don’t want her to be as obsessive as me but I would like her to pick up things and to see when things are on the floor. Yesterday she brought me upstairs to show me that she had now understood why it was unwise to leave her chest of drawers open. 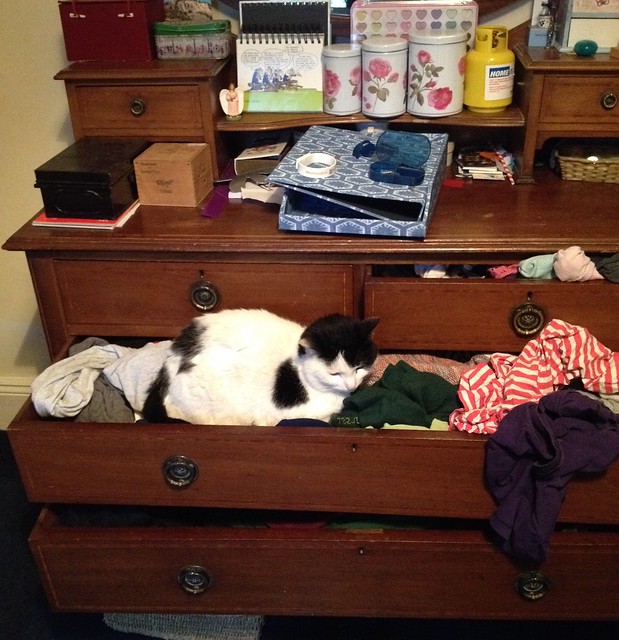 She has put a lot of time and energy recently into planning for the zombie apocalypse. She tells me that she has looked it up on the internet and a lot of children go through this phase so we are not to worry. When we drove out to visit her grandparents on Sunday, she mapped the route carefully so that she would be able to go there with her band of survivors (her grandparents live near the sea, boats are great in the zombie apocalypse). There is lots, lots more, but I will spare you.

She still has an amazing memory which she is putting to good use learning poetry (aside, did you know that Felicia Hemans who wrote “The boy stood on the burning deck/when all but he had fled” was buried in Dawson Street in Dublin?) which Daniel quite enjoys also and even Michael doesn’t mind occasionally.

She loves the company of adults and gets on particularly well with my brother. They spend all their time arguing; both of them like to have the last word.

However, when she has her friends over, she does not love the company of adults, particularly her parents. She has been very lucky in primary school and had a group of lovely friends not all of whom, alas, are going to her secondary school.

She and her brothers enjoy reasonably good relations much of the time but occasionally they tire of the yoke of tyranny; she is always in charge. On the plus side, like all good tyrants, she provides entertainment. In her case this takes the form of invented games and stories which they love. 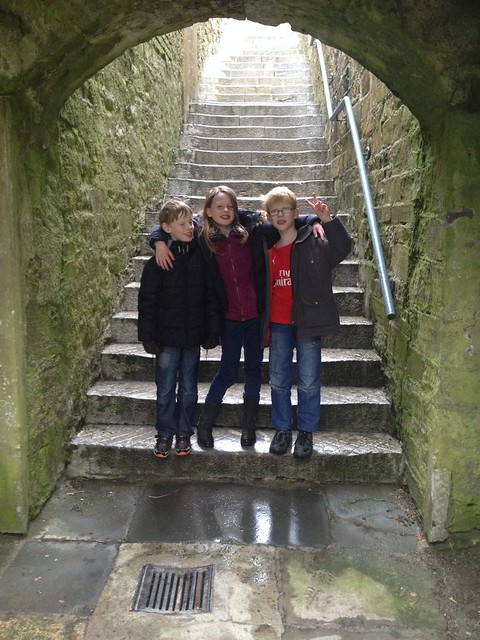 She is very responsible. I often leave her home alone with one or other of the boys while I go out on small errands and when I send her to the shop to buy things, I don’t even worry about her any more because I know she will be sensible and cross roads properly and know what to do, if it all costs too much or if the shop is closed. Next year, she will be home alone from 1 on the day she gets her half day so this is the beginning of her latch key lifestyle.

I think the next year may bring lots of changes.