A number of people asked me whether I had a “natural birth” with the boys. Did I have a caesarian section? No. On the other hand, does the picture below look natural to you? 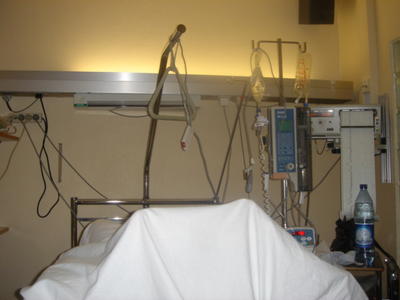 My epidural arrived before my first contraction – the doctor was summoned from his bed at 6 in the morning, and proper order too. Labour was painless and took place between 9.00 and 3.00. It made me vomit though and vomitting as you lie on your back being wheeled along hospital corridors towards the delivery room is suboptimal. Daniel was born at 3.15 a strapping 3.03 kilos and, in what I fear may well be a pattern for life, nobody worried about him. Michael was delighted with the extra space available and turned sideways. Two burly midwives grabbed his little person and from the outside manoeuvered him into head down position while I looked on in horror and my doctor grabbed for his head (she had a lovely time in Croatia, thanks for asking).

She told me later that she thought that she’d have to an emergency caesarian and she had asked the nurses to call the anaesthetist without mentioning his name – in case I gathered that that was why he was being called. I am touched by her faith in my intelligence and powers of concentration. Anyhow, Michael was born at 15.39 and though on the light side at 2.2 kilos, he was absolutely fine. The potential caesarian, also explains why the anaesthetist turned up immediately after Michael was born and chatted away to myself and Mr. Waffle for no reason we could understand at the time. As I threw up into my little kidney bowl, I did wonder vaguely whether it was some kind of revenge for getting him up at 6 in the morning. He’s Lebanese and we were talking about the situation in the Middle East between vomits, and it was a little challenging. “Syria is not good” was about all I could summon to mind at that precise moment and even I knew that to be inadequate. I wouldn’t mind but I’d struggled through a long article in the LRB only recently not to mention having read “Pity the Nation” by Robert Fisk when I was in college.

To summarise, the stay in hospital was for a full week and despite constant interruptions (meals, nurses, obstetrician, paediatrician, physio, woman to throw out dead flowers, cleaner, tea lady morning and afternoon, water delivering lady, the odd visitor etc.), I felt pretty well. I think this was partly because, as a bad mother, I roomed out and mixed breast and bottle. Doubtless I will be chucked out of the Brussels Childbirth Trust.

It is very nice to be home though. Delighted with kind bloggers’ reactions, also flowers, cards, presents, emails and a beautiful new watch from my loving husband. Also lovely to see a bit more of my little girl (not too much more, mind, she’s still going to the creche every day). My mother has, alas, decamped to Cork where she deemed that my father’s need was greater than ours. I suppose she knows – she’s been married to him a while; in fact the boys were born on my parents’ 38th wedding anniversary.

Oh I know I shouldn’t have but that made me laugh!!! Glad you’re well and congratulations the boys look absolutely adorable. Take Care xxxx

Well I did warn you about your father – he could have left the emersion on or something – disastrous. Your mother couldn’t take that kind of risk…

Glad all is well – good to see you’re back blogging a week later – jolly good show.
Am I reading the clocks right in that the 2nd wee lad decided to join us a full 12 hours later? Poor you. All’s well…etc, though.

The youngster says it all above…. well done, ‘waf and welcome back.

I can only hope, after I give birth, that someone will come and discuss the middle east with me.
I’m glad you’re back! I can’t believe you have twins now! ���

That looks like the bridge of the Starship Enterprise.
Well done Mrs Waffle ….

Just looking at that photograph terrifies the life out of me, some of those things look like medieval implements of torture. You’re my hero.
Your new boys are so handsome, congratulations to all the Waffles.

Congratulations on your gorgeous boys! ���

Amerly, a sweetie is winging its way to you.
Star, indeed you should not! Thanks for congrats.
Loc, no, no, second joined about half an hour after the first – clearly my mastery of the 24 hour clock isn’t all it could be.
SJ, that would make two of us.
Well, Minks, somewhat guiltily, I am mixing breast and bottle, cos I just can’t manage to breastfeed them both at the same time and doing them sequentially would mean that I would have to spend all my time under a baby…
Pog, I know, but great stuff the old epidural all the same.
Beso, many thanks, and thanks for the sweeties also.
Roach, thank you.
Beth, thank you – am impressed that you are taking time out to check on other blogs!
Negrito – for good or for the weekend?

for good, Gritoland is now located in Ixelles, near Place du chatelain 🙂

ah. well then. that would make all the difference I’d imagaine. for your physical well-being as well as your sanity. you can work on the whole 24hour thing over the next few months in-between nappy changes…

Yes, I look forward to that…