The Princess is now able to ride on the back of
Mr. WaffleÂ’s bike due to extraordinary outlay on seat and helmet.  Her imperial highness is pleased to approve
this mode of transport. 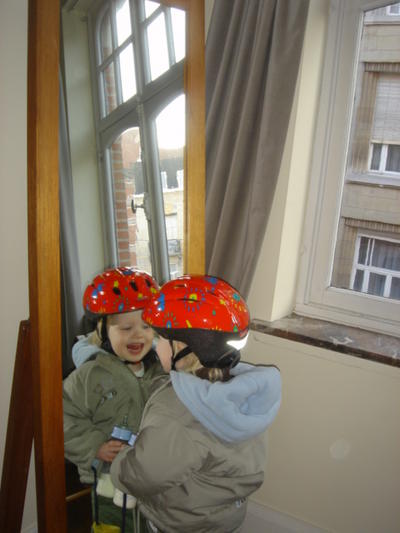 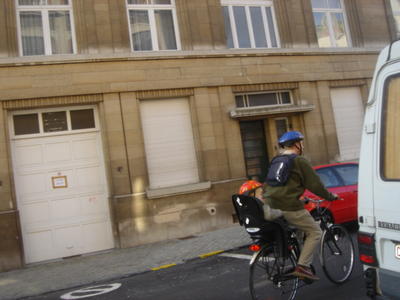 She’s so pleased with herself!

And the BEST thing about the bike and the seat and the helmet, is that she can zoom around Brussels and her baby brothers haven’t a hope of ever catching up with her. Her position above that back wheel is entirely her own.

I think I should tell her that.

The in-laws are coming on Thursday. Great excitement. I received an email from my father-in-law as follows, comments are in italics:

Reading between the pixels, things may be more than a little hectic, even with help. It may be a Freudian slip, but the lack of a mention of Princess might mean that she is becoming more attuned to the new arrivals (or just spending time at the crĂ¨che). Au contraire, madam continues to regard the new arrivals with
disdain. Yesterday I spoke to my brother and he asked after her and her views on the new arrivals. I said that she liked them. Later when I reported this conversation to herself she said in tones of great disgust “But Mummy, I DON’T like the babies.

Anyway, for what it is worth, grandma and I are getting measured for our cavalry uniforms, practicing the bugle, buying prezzies and the like. We will be ready for our gallop to the relief of the Fort, way out in the Belgian desert. Really looking forward to the visit, to do good works and drink a few beers. Beer, beer?
He thinks there will be beer? I doubt it, it will be constant baby and toddler minding duty for the royal
grandparents here at baby bootcamp.

Locotes
on 24 October 2005 at 12:58
Surely even a little beer during babysitting duty can be allowed? Have a heart…

Minkleberry
on 24 October 2005 at 20:48
make sure you sit down a lot!
belgianwaffle
on 25 October 2005 at 11:52
HJB, their sufferings are about to begin. Loc, under no circumstances, they are here to work. No beer on the chain gang. Minks, most certainly.

Constant listening to Radio 4 reveals that the
British are considering introducing 3 months paid paternity leave.  Meanwhile, poor
Beth jacks in her job due to
pathetic maternity leave in the US.  I think itÂ’s all the puritans out there.  They should let more feckless catholics in.   Further example of American puritanism: my
sister tells me Â“it’s back to winter hours [at work]Â… we get to start 30
minutes later every day so I’m in at 8.30 rather than 8 – except for days when
I’m late or have a 7.00 meetingÂ”.  What
kind of country allows companies to schedules 7 am meetings? One thatÂ’s over imbibed
the puritan work ethic.

I like that I “jacked in” my job – sounds like so much more fun than just quitting. The really sad part is that I was lucky to be able to get the maximum leave, 12 weeks, and was also lucky to get it at full pay, but only by using the paid leave I had accrued over nearly 7 years at the company.

Beth, that’s just depressing. FT, not an immediate issue for you, we assume.