I have mentioned previously that I am a changeling. Whereas my parents and brother and sister never throw anything out, I keep a black bag at the bottom of the wardrobe which I fill up with unused, unnecessary or grown out of things to give away.

When we were once at my parents’ house in Cork, Michael was looking for a bookmark. I dug into the pile of papers on the desk and pulled out a scrap of old envelope.

When we got home to Dublin, it floated on to the ground and I picked it up to throw it in the bin. This is what it was: 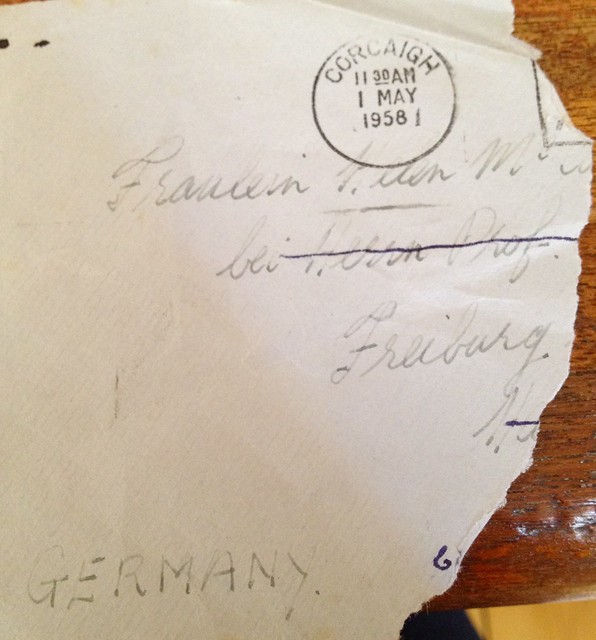 My mother won a DAAD scholarship to Germany in the late 1950s and she clearly kept the envelopes in which she received her correspondence (based on her later behaviour, I can confirm that this is typical; sometimes because it is handy to have scrap paper – not, I would have thought, hugely needed in our house – and sometimes to keep the address on the back). She loved her time in Freiburg and, indirectly, it led to her meeting my father as I covered here.

Now, of course, ironically, I can’t throw out this scrap of envelope.

The Princess and I went to a reading last night based on the life and work of Lafcadio Hearn. It was not a success. Notwithstanding the potential for real interest, I regret to report that the performance and script were dull. The audience was not large and most of them slumbered throughout the performance.

It’s not all fun and games supporting the arts, you know.

Michael asked me at dinner, “Mum, do I get any spam in my email, aside from you, I mean?”

Herself likes to spread salt on her rice cakes (don’t judge). One day she brought some sea salt into school in a bit of cling film. One of her best friends asked her, “Why are you putting crystal meth on your rice cakes?”

I met a nice American couple from Colorado on the train recently. They were finishing a week’s visit to Ireland. They had been to Dublin (where, they revealed, in passing, that his father had happened upon some junkies shooting up in the city centre near where they were staying, alas), Clare, Cork and Kerry. They seemed to have picked up a number of misconceptions during their stay.

Them: We’re from just outside Colorado, where they brew Coor’s beer.
Me: Oh right.
Them: We knew that would help to place it for an Irish person.
[Not so much, actually]

Them: Why does everyone in Ireland love Wales so much?
Me: Ah, Wales who beat England in the rugby world cup match recently?
Them: Yes, everyone in the bar was shouting ‘Come on Wales!’
Me: That’s a complicated one.

Them: We took a tour bus in Dublin and saw the Protestant church that used to be separate from a Catholic church by a wall to keep the Protestants and Catholics apart.
[I’m pretty sure the tour company made that up.]

Them: So we went into a bar and this man at the bar just looked at us and said, “F*** off!” I guess that’s Irish pub humour for you [they laughed good-naturedly while I was just appalled].

Them: So the one thing we knew we had to see, if we came to Ireland, was the Blarney stone [possibly one of Ireland’s dullest attractions as they eventually found out – up the road from Cork, readily accessible from my parents’ house, I have visited it once – that was plenty].

The detail on their trip to Blarney, however, was enough to put off the most enthusiastic. They were staying in Killarney. Killarney is in Kerry and about 80 long kilometres from Blarney which is just outside Cork city. 80kms may not be as far in Colorado as it is on the Cork-Kerry road. Possibly for this reason, they decided to get a taxi to Blarney. That was €160 worth of taxi. Due to, admittedly, poor planning on their part and having arrived on October 1 when, as any Irish person would tell you, all Irish monuments change their opening hours, Blarney Castle had closed eight minutes before they arrived. However, undaunted, our heroes went back to Killarney (where they were staying) and paid a further €120 (reduced rate) to go Blarney and back in the morning. They enjoyed the added bonus of a near miss on the narrow road where their taxi driver risked all their lives passing out a turf lorry – authentic in so many ways. With difficulty, I managed to restrain myself from sharing with them how many more economical and effective ways there were to achieve their objective. Still, they seemed happy and, as they pointed out to me, it would be a lot more expensive to get to Blarney from Colorado. This was undoubtedly true and I could only admire their youthful optimism.

I have decided that the next time we are in Cork, I will take the children to Blarney Castle, maybe there is something in it after all.

This morning, Mr. Waffle disposed of two partially disembowelled mice, one from the utility room and one from the kitchen. Then he whooshed the indignant cat away from the pile of her vomit by the back door. It contained visible mouse entrails and her previous night’s dinner and she was busy re-consuming it.

I will leave you with that image. You’re welcome.